– Nevada: The Election Results Are Rigged!!! 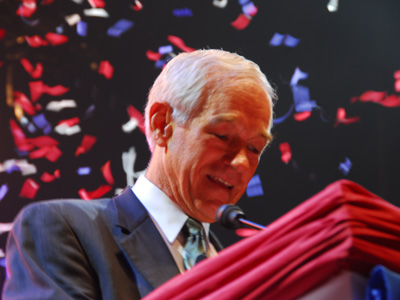 By now, it is clear that the Maine caucuses were a complete mess.

Evidence is mounting that Mitt Romney’s 194-vote victory over Ron Paul was prematurely announced, if not totally wrong. Washington County canceled their caucus on Saturday on account of three inches of snow (hardly a blizzard by Maine standards), and other towns that scheduled their caucuses for this week have been left out of the vote count. Now, it looks like caucuses that did take place before Feb. 11 have also been left out of final tally.

As the full extent of the chaos unfolds, sources close to the Paul campaign tell Business Insider that it is looking increasingly like Romney’s team might have a hand in denying Paul votes, noting that Romney has some admirably ruthless operatives on his side and a powerful incentive to avoid a fifth caucus loss this month.

According to the Paul campaign, the Maine Republican Party is severely under-reporting Paul’s results — and Romney isn’t getting the same treatment. For example, nearly all the towns in Waldo County — a Ron Paul stronghold – held their caucuses on Feb. 4, but the state GOP reported no results for those towns. In Waterville, a college town in Central Maine, results were reported but not included in the party vote count. Paul beat Romney 21-5 there, according to the Kennebec County GOP.

“It’s too common,” senior advisor Doug Wead told Business Insider. “If it was chaos, we would expect strong Romney counties to be unreported, and that’s not what’s happening.”

The Maine Republican Party won’t decide which votes it will count until the executive committee meets next month. But Wead points out that even if Mitt Romney holds on to his slim lead, it will be a Pyrrhic victory.

“He will have disenfranchised all of these people,” Wead said. “It could be a costly victory — it is a mistake.”

The (alleged) bias against Paul may also be the product of an organic opposition to the libertarian Congressman and his army of ardent fans. Paul volunteers tend to be young and relatively new to party politics, and their presence has many state GOP stalwarts feeling territorial.

“People feel threatened — they don’t want to see a bunch of kids who may have voted for Barack Obama take over,” Wead said. “They feel a sense of ownership over the party — but there has to be an accommodation.”

But state party machinations are already starting to backfire. The Paul campaign believes it has won the majority of Maine’s delegates — and the perceived election fraud has galvanized Paul supporters to demand their votes be counted in the state’s straw poll ‘beauty contest.’

Caucus chaos has also proved to be fertile ground for Paul’s quiet takeover of the Republican Party. Since 2008, the campaign and Paul’s Campaign for Liberty PAC have made a concerted effort to get Paul sympathists involved in the political process. Now, tumult in state party organizations has allowed these supporters to rise up the ranks.

“We like strong party leadership when it comes from us,” Paul campaign chair Jesse Benton told Business Insider. “Our people work very hard to make sure that their voice is heard.”

The fruits of this labor are evident in Iowa, where Paul’s former state campaign co-chair A.J. Spiker was just elected as the new chairman of the Iowa Republican Party. Spiker replaces Matt Strawn, who stepped down over this year’s Iowa caucus dustup. In Nevada, the state chair has also resigned over caucus disaster, and several Ron Paul supporters are well-positioned to step up to fill the void. These new leaders not only expand Paul’s influence at the state level, but also help protect Paul and his hard-won delegates from state party machinations as the delegate-selection process moves to district and state conventions, and eventually the Republican National Convention this summer.

“We are always trying to bring people into the party,” Benton said. “I think that is a very positive thing for Republicans. Ron is the person who can build the Republican base, bring new blood into the party. That’s how you build the party.”

In Maine, the caucus disaster has made the state GOP prime for a Ron Paul takeover. And that means that Paul’s hard-won delegates will be protected as the delegate selection process

“We are taking over the party,” Wead told BI. “That’s the important thing — and that is what we are doing in Maine.”

– Hilarious: Newt Gingrich Promises Moon Base By The End Of His SECOND TERM

– House Ordered Gingrich To Pay An Unprecedented $300,000 For Ethics Violations

– Interview With Oliver Stone: Expects America To Collapse – ‘The Most Interesting Candidate … Is Ron Paul’ – ‘He’s The Only One’ … ‘Saying Anything Intelligent About The Future Of The World’

– Ron Paul ‘Did Not Vote’ Against NDAA – NDAA Voting Record

– Ron Paul On The United Nations

– Once And For All: Ron Paul Is Anything BUT Racist (Video)

– US Soldier In Trouble For Praising Ron Paul On CNN

– The Compassion Of Dr. Ron Paul – So Who Is Behind The Ron Paul Attacks?

– Ron Paul On CNN: ‘I Challenge Everybody From The Military Industrial Complex To The Banking System!’ (Video)

– Legendary Investor Jim Rogers: Ron Paul Is ‘The Only One In American Politics That Seems To Have A Clue About What Is Going On’ – Supports ‘Ron Paul 2012′

– Veterans For Ron Paul In 2012: ‘The Only Candidate That Protects, Defends, Supports And Upholds The Constitution … And Takes His Oath Seriously’