In a move that will surely shock, shock, the monetary purists out there, the Bank of Japan has just gone and done what we predicted back in May 2011, with the first of our “Hyprintspeed” series articles: “A Look At The BOJ’s Current, And Future, Quantitative Easing” (the second one which discussed the imminent advent of the ¥1 quadrillion in total debt threshold was also fulfilled three weeks ago). So just what did the BOJ do? Why nothing short of join the ECB, the BOE, and the Fed (and don’t get us started on those crack FX traders at the SNB) in electronically printing even more 1 and 0-based monetary equivalents (full statement here). From WSJ: “The Bank of Japan surprised markets Tuesday by implementing new easing policies and moving closer to an explicit price target, the latest sign of growing worries around the world about the ripple effects of the European debt crisis on the global economy. With interest rates already close to zero, the BOJ has relied in recent months on asset purchases to stimulate the economy. In Tuesday’s meeting, the central bank expanded that plan by ¥10 trillion, or about $130 billion. The facility, which includes low-cost loans, is now worth about ¥65 trillion, or $844 billion.” The rub however lies in the total Japanese GDP, which at last check was $6 trillion (give or take), and declining. Which means this announcement was the functional equivalent to a surprise $325 billion QE announced by the Fed. What is ironic is the market reaction: the BOJ expands its LSAP by 18% and the USDJPY moves by 30 pips. As for gold, not a peep: as if the market has now priced in that the world’s central banks will dilute themselves to death. Unfortunately, it is only at death, and the failure of all status quo fiat paper, that the real value of the yellow metal, whose metallic nature continues to be suppressed via paper pathways, will truly shine.

Only one out of the 11 analysts polled by Dow Jones Newswires had predicted the BOJ to ease this week.

Most BOJ watchers had said that while there were concerns over the impact of the strong yen and the European debt crisis, neither financial nor economic conditions had worsened to levels that warranted immediate further action.

The BOJ policy board also revised the wording of its “understanding of price stability,” saying now it has set a “price stability goal” of 2% or lower in the core consumer price index in the medium- to long-term and a goal of 1% growth for the time being. For calendar year 2011, Japan’s core consumer price index—excluding food prices—was negative 0.3%.

The bank had come under criticism that its definition of price stability, the goal it seeks to achieve in its fight against deflation, was too convoluted and vague. Such attacks had increased in recent weeks after the U.S. Federal Reserve in late January adopted a more explicit price target.

Faced with a prolonged deflation, politicians have stepped up their calls on the BOJ to take fresh action, with some threatening to revise legislation to strip away the central bank’s independence from the government.

First of all, don’t get us started on inflation targeting. Or rather, get Dylan Grice started: he will tell you all about it, and then some.

And while we now really just can’t wait to bring to our readers what the global central bank balance sheet will look like after February, when it takes into account the recent GBP50 billlion BOE expansion, the €500-€1000 billion European LTRO part Deux, and now the ¥10 trillion additional BOJ easing, here is what we said on the topic back in May of 2011.

“In a sign some in the BOJ were more cautious about the economic outlook than Shirakawa, Deputy Governor Kiyohiko Nishimura proposed on Thursday expanding the central bank’s asset buying scheme by 5 trillion yen ($62 billion).  While the proposal was outvoted by the board, some market players said it may be a sign the BOJ may loosen policy as early as next month. “And loosen it will, because unfortunately as the past 30 years have shown, the country at this point has no other choice but to take the same toxic medicine which merely removes the symptoms briefly, while making the underlying problems far worse.  Also, with the Fed threatening to end QE2 in precisely two months, someone out there has to be dumping hundreds of billions in infinitely dilutable 1 and 0s into primary dealer prop desks. Furthermore, as shown above, the BOJ needs not to buy securities outright: tinkering with the shadow economy in the form of the repo market will provide just as desirable an outcome… If, of course, said outcome is to see gold and silver continue on their relentless rise to new all time record highs. And/or higher. Because the only thing limiting the price of gold is price stupidity and the amount of paper money in existence. Both are infinite.

It’s good to see that our May 2011 quote on what the only realy gating factor on the price of gold is has now been broadly absorbed in the asset management vernacular. And yes, once the market does realize what is happening, following the usual 6-8 week uptake period, expect another step function higher in precious metals, CME margin hikes notwithstanding (and the recent CME faux margin cut bull trap aside).

Finally, unlike our own Fed, at least the BOJ is not shy telling the world it is openly buying up REITs and ETFs. For some odd reason our boys over at Liberty 33 are still playing so coy they can only punch their equity trade tickets via Citadel. 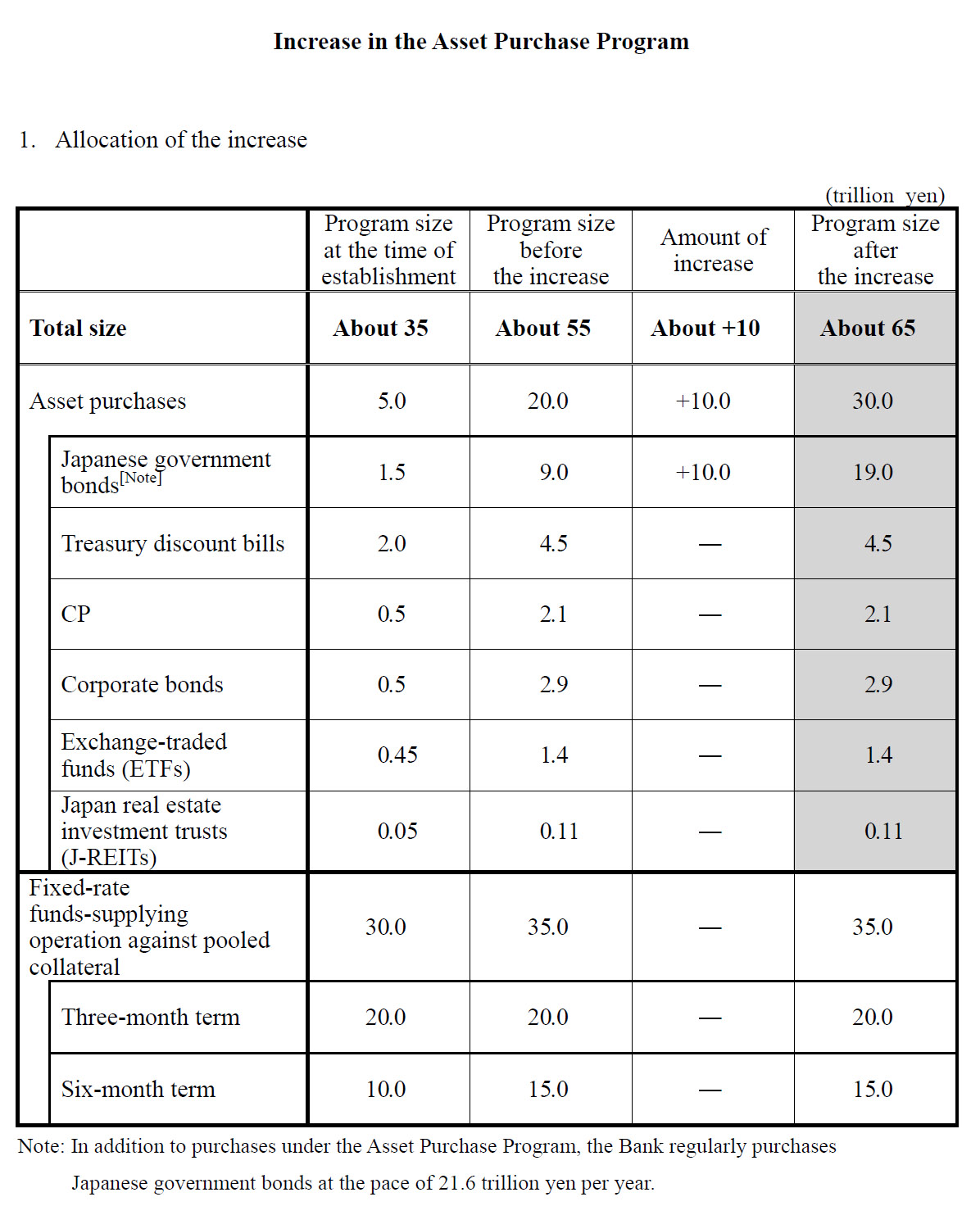 “If the American people ever allow private banks to control the issue of their money, first by inflation and then by deflation, the banks and corporations that will grow up around them (around the banks), will deprive the people of their property until their children will wake up homeless on the continent their fathers conquered.”
– Thomas Jefferson