Some of our German readers may be laboring under the impression that following the €110 billion first Greek bailout agreed upon and executed in May 2010, the second Greek bailout would cost a “mere” €130 billion. Alas we have news for you – as of this morning, the formal cost of rescuing Greece for the adjusted adjusted adjusted second time has just risen to €145 billion, €175 billion, a whopping €210 billion, bringing the total explicit cost of all Greek bailout funds to date (and many more in store) to €320 billion. Which incidentally is a little more than Greek GDP (which however is declining rapidly) at 310 billion, only in dollars. So as of today, merely the ratio of the Greek DIP loan (Debtor In Possession, because Greece is after all broke) has reached a whopping ratio of 136% Debt to GDP. This excludes any standing debt which is for all intents and purposes worthless. This is secured debt, which means that if every dollar in assets generating one dollar in GDP were to be liquidated and Greece sold off entirely in part or whole to Goldman Sachs et al, there would still be a 36% shortfall to the Troika, EFSF, ECB and whoever else funds the DIP loan (i.e., European and US taxpayers)! Another way of putting this disturbing fact is that global bankers now have a priming lien on 136% of Greek GDP – the entire country and then some now officially belongs to the world banking syndicate. Consider that when evaluating Greek promises of reducing total debt to GDP to 120% in 2020, as it would mean wiping all existing “pre-petition debt” and paying off some of the DIP. Also keep in mind that Greece has roughly €240 billion in existing pre-petition debt, of which much will remain untouched as it is not held in Private hands (this is the debt which will see a major “haircut” – or not: all depends on the holdout lawsuits, the local vs non-local bonds and various other nuances discussed here). If you said this is beyond idiotic, you are right. It is not the impairment on the Greek “pre-petition’ debt that the market should be worried about – that clearly is 100% wiped out. It is how much the Troika DIP will have to charge off when the Greek 363 asset sale finally comes. This is also what Angela Merkel will say tomorrow when Greece shows up on its doorstep with the latest “revised” agreement from its parliament to take Europe’s money ahead of the March 20 D-Day. Because finally, after months (and to think we did the math for Die Frau back in July) Germany has done the math, and has reached the conclusion that letting Greece go is now the cheaper option.

And finally, and going back to the WSJ’s article, it appears that in addition to the €30 billion in Ponzi accounting which will have to be funded from the EFSF so the ECB does not “profit” on its Greek bond holdings (can someone please look at this chart and explain to us how the ECB can profit on this security).

Greece will borrow up to €35 billion from Europe’s temporary bailout fund to finance an ambitious debt-buyback plan from the European Central Bank, according to official documents released by the government Saturday.

The 19-page bill sets out how the restructuring will be implemented and includes a plan through which Greece will buy back those bonds now held as collateral in the national central banks of euro-zone countries.

The plan is part of a raft of new measures Greece must take to secure a €130 billion bailout from its European partners and the International Monetary Fund, along with a €100 billion debt write-down the country is negotiating with its private-sector creditors

The measures, which will be voted on in parliament Sunday, include sweeping reforms such as €1.1 billion worth of cuts in pharmaceutical costs, abolishing restrictive rules on tourist guides and opening up Greece’s energy market to foreign investment.

Who funds this latest and greatest addition to the monetary black hole that is Greece? Take a wild guess…

According to the bill, the European Financial Stability Facility, the euro zone’s transitional rescue fund, will lend Greece the money to carry out the buyback. The ECB will act as an intermediary in this transaction, buying the bonds on Greece’s behalf.

In other words, joint and several EFSF member countries such as Italy and Spain, oh and Greece of course, will be funding even more money to bail out Greece, only they won’t be doing it, the ECB will… If your head is not spinning yet, you are not paying attention.

One person, whose head is most certainly not spinning and whose mind is long made up, is Angela Merkel. Who will promptly put an end to this lunacy as soon as the ball (bail?) is back in her court officially, some time on Sunday. And all that is of course assuming that there are Greek member of parliament who have not resigned by the time tomorrow when Greece is now fully expected to pass this latest bill.

Finally ask yourselves this: what would have happened if Greece had been allowed to default in May 2010 and all debts wiped out, and instead of feeding its creditors, the funding sources had provided the country with €320 billion in new debt (as they are anyway, only it is to make its creditors whole). It would mean that, assuming a dollar for dollar equivalency between GDP and debt, Greece would have grown by about 36% more in the past two years compared to where it is now, even with the occasional German submarine purchase. Something tells us the Greek people should have the right to know this.

Finally, a chart of what is coming to a Keynesian banana republic near you, or what it means when you can no longer mask insolvency in nominal terms. 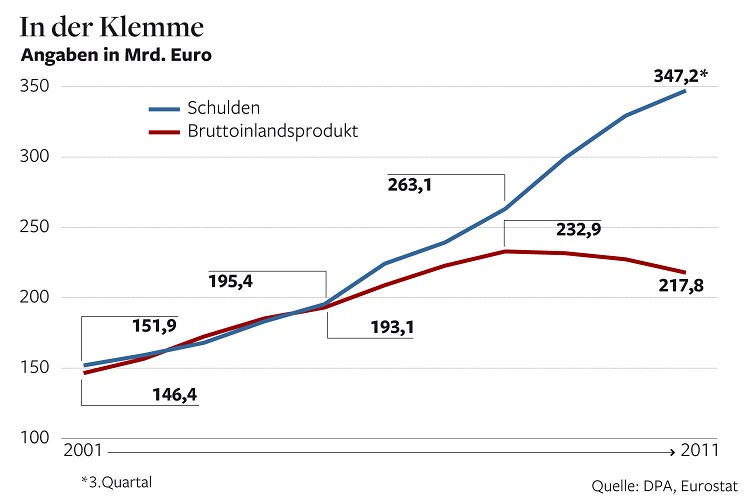