Over the past week we have repeatedly exposed the BLS’ shennanigans to both keep the headline unemployment rate suppressed and to generate an upward bias in the market courtesy of a “bigger than expected beat” of expectations. Granted, various semantics experts continue to scratch their heads in attempting to explain a collapsing labor force when even Goldman’s Sven Jari Stehn just predicted that it will drop to 63.1% by the end of 2012 (and 62.5% by the end of 2015). Funny then that the US will have no unemployment left when the participation rate drops to 58.5%. And no, the “population soared argument based on revised data” doesn’t quite cut it when the bulk of said surge not only did not get a job, but was not even counted toward the labor force. Yet what the biggest flaw with all these arguments that vainly (and veinly) attempt to defend the US economy as if it is growing, is that they focus exclusively on the quantity of jobs, doctored or not, and completely ignore the quality. We have decided to step in and fill this void.

By now, most of our readers know that every incremental dollar of public debt leads to less than one dollar of GDP growth, courtesy of the debt/GDP ratio having surpassed 100% a month ago. Yet what most don’t know is that the marginal utility of public debt is not the only thing that may have peaked: as of January 31, 2012, the date of the most recent BLS jobs report, it appears that the “marginal utility” of job formation (if such a concept existed) also turned negative. And since it doesn’t exist, yet, allows us to explain.

While the BLS is the best, if massively seasonally adjusted, tracker of job quantity, the only true indicator of job quality is the FMS’s Daily Treasury Statement, which tracks and updates how much government revenue is generated any given day courtesy of withheld income and employment taxes. So to avoid any potential semantic confusion, we will stick to numbers and bullets: hopefully even the most dedicated newsletter sellers and “asset managers” can follow those without losing much in translation.

Presented visually – the black bar shows the cumulative divergence between the fiscal 2011 and 2012 data series. Below zero, such as that on January 31, is bad. 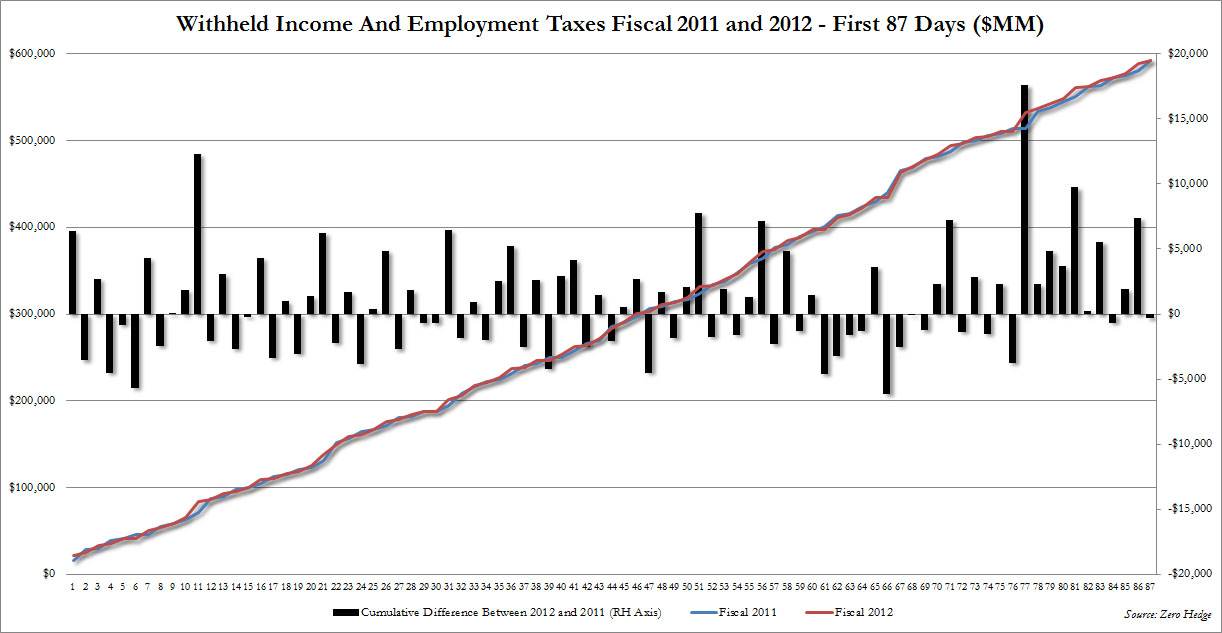 But that’s not the kicker. This is:

This analysis ignores completely any seasonal fudging, census adjustments, “updated population controls” and all those other “fudge factors” which keep BLS Ph.D.s employed (especially during election years). It is pure math based on numbers reported by both the US Treasury and the BLS.

This analysis also has substantial ramifications on the Treasury’s forecast debt issuance schedule, which is driven substantially based on model assumptions for tax withholdings. Alas, absent some massive surge in income, and thus increased tax withholdings, going forward, we see no reason why there should be any material upside in government income tax revenues in 2012 compared to 2011. Which means that absent significant spending cuts, which we all know will never happen, the US is about to substantially underestimate just how much debt it has to issue for fiscal Q2 and Q3. Needless to say, this also means that the debt ceiling in such a case, would be breached far sooner than even in our pessimistic scenario of early November 2012.

Finally, and most, importantly, we hope that this analysis has proven that while the BLS may play around with various numerators, denominators, seasonal adjustments, and other irrelevant gimmicks which are only fit for popular consumption particularly by those who have never used excel in their lives, a deeper analysis confirms our concerns, that not only is America slipping ever further into a state of permanent “temp job” status, but that a “quality analysis” of the jobs created shows that the US job formation machinery is badly hurt, and just like the marginal utility of debt now hitting a critical inflection point, so the “marginal utility” of incremental jobs is now negative, which means that Obama, or whichever administration, can easily represent to be growing jobs, and declining the unemployment rate by whatever gimmick necessary. Yet these very jobs are now generating far less in so very critical tax revenue for the US treasury, and continue to declining steadily in quality.