Following yesterday’s frankly stunning news that the Troika politely requests that Greece hand over its first fiscal, then pretty much all other, sovereignty to “Europe”, here is the Greek just as polite response to the Troika’s foray into outright colonialism:

What is interesting here is that unlike the highly irrelevant IIF negotiations which will end in a Greek default one way or another, the real plotline that should be followed is this one: because unless Germany, pardon the Troika, gets the one condition it demands, namely “absolute priority to debt service” and “transfer of national budgetary sovereignty“, as well as a “constitutional amendment” thereto. there is no Troika funding deal. Furthermore, since as a reminder the PSI talks are just the beginning, the next step is ensuring compliance, as was noted yesterday (“[ceding sovereignty] will reassure public and private creditors that the Hellenic Republic will  honour its comittments after PSI and will positively influence market access”), any refusal to implement such demands is an automatic dealbreaker. Which means anything Dallara and the IIF say, as representatives of a steering committee that at this point probably constitutes of one bondholder, with the bulk having shifted to the ad hoc committee, is irrelevant. Germany just got its answer. And the next step is, as Zero Hedge first suggested, an epic LTRO in precisely one month, whose sole purpose will be to prefund European banks ahead of the Greek default with enough cash to withstand Europe’s Bear Stearns. Although as a reminder, in the US, Bear Stearns only led to Lehman and the global “all in” gambit to preserve the financial system by shifting bank insolvency risk to the sovereigns (a chart showing bank assets as a percentage of host countries’ GDP can be found here). But who will bailout the world’s central banks which already collectively hold over 30% of global GDP in the form of “assets”, or as this term is better known these days, debt? 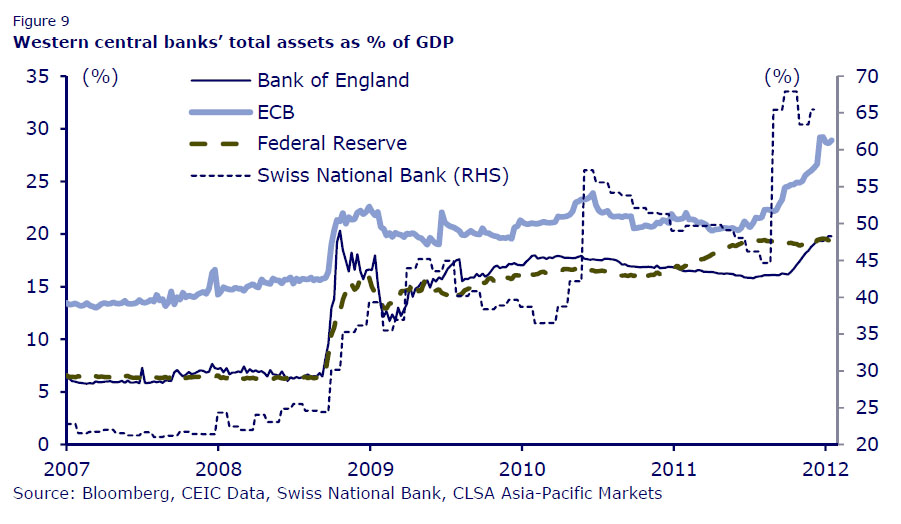 And for those who missed it the first time, here was the Troika’s declaration of bloodless war:

Athens categorically rejected the German proposal to cede control over its budget to the European Union as a precognition for the second bailout, the rescue package for Greece. “We can never accept this. A similar proposal was made in the past by a  Dutch minister. We do not even discuss about it” senior governmental sources told Athens News Agency (quoted via in.gr).

AFP quotes another (?) Greek government source, saying that ”There is effectively a ‘non-paper’ that was presented to the Eurogroup,” said the source and stressed that “Greece will not discuss such a possibility. It is out of the question that we would accept it, these are matters of national sovereignty.” At the same time the source told AFP that such a move would “require a change in (EU) treaties.”

So far there has been no reacton by the other two coalition government partners conservative Nea Dimokratia and far-right LAOS.

Greek Communist Party (KKE) said “f the Commissioner be necessary for the plutocracy, it will accept him. But with or without a commissioner, crime against the people is predetermined by the co-ruling of the EU the ECB and the plutocracy in general. ”

Alexis Tsipras, chairman of left-wing SYRIZA asked the Greek government to resing immediately and general elections to be held in February. He describeed the transefer of budget control as “a plan beyond any reason. “It is a plan to loot the country and the transfer of its sovereignty to the Eruopean banks and the international usury” Tsipras said (via Proto Thema)

Finally, to anyone who is still confused by the sequence of events, here is a reminder of how it would all transpire, back from July 21, 2011:

The Fatal Flaw In Europe’s Second “Bazooka” Bailout: 82 Million Soon To Be Very Angry Germans, Or How Euro Bailout #2 Could Cost Up To 56% Of German GDP