“The Seattle ribbon seal’s story is unknown, but one could be forgiven for thinking it a harbinger of things to come. This week, cold winds from Alaska helped create a record winter storm in Seattle, slamming the metro area with 4 to 8 inches (10 to 20 centimeters) of snow.” 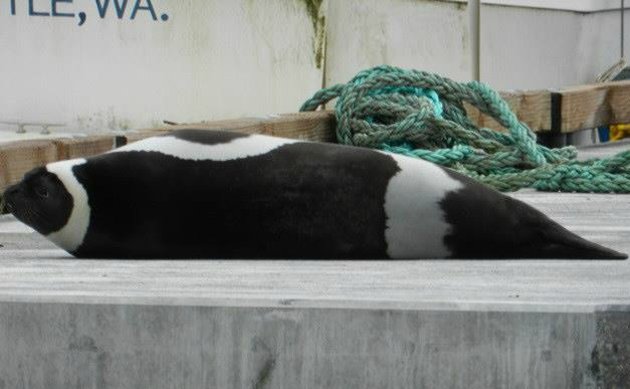 A Seattle resident recently got a big surprise when she discovered a strange-looking furry visitor on her property.

“She woke up and it was lying on her dock, hanging out and sleeping — just chilling,” said Matthew Cleland, district supervisor in western Washington for the USDA’s Wildlife Services, and the recipient of a photo of the bizarre intruder.

“I thought, ‘That’s an interesting-looking creature,'” Cleland told OurAmazingPlanet. “I had no idea what it was.”

A quick glance through a book in his office soon revealed it was a ribbon seal, an Arctic species that spends most of its life at sea, swimming the frigid waters off Alaska and Russia.

Somehow, the seal turned up on the woman’s property, about a mile from the mouth of the Duwamish River, a highly industrialized waterway that cuts through southern Seattle. In 2001, the EPA declared the last 5.5 miles (9 kilometers) of the river a Superfund site — an area contaminated with hazardous substances in need of cleanup.

Boveng said the animals spend only a few months per year on sea ice, to molt and give birth, and have almost never been seen so far south. “So it’s a surprise, but knowing the species, it’s not a complete surprise to me,” he said. “They’re good travelers.”

The ribbon seal, which Boveng identified as an adult male, “looked to be in really good shape,” he said. “We don’t have any way to rule out other possibilities, but I’d say it’s almost certain that it swam there.”

Satellite tracking studies have revealed that ribbon seals do sometimes make it as far as the north Pacific Ocean, south of the Aleutian islands, but much about the species remains mysterious. Because they spend so much of their lives in the open water, it’s a challenge to track them.

“Unfortunately we don’t know a lot about their numbers,” Boveng said. “There’s never been a reliable survey.”

A conservation groups has made efforts to list ribbon seals as an endangered species because of concerns about disappearing sea ice in the Arctic. So far the federal government has declined to do so, but is continuing to review the case for listing.

The Seattle ribbon seal appears to be only the second on record to make it so far south.

In 1962, a ribbon seal showed up on a beach near Morro Bay, Calif., a town about 200 miles (320 kilometers) north of Los Angeles. According to contemporary reports, the seal was in good shape, but totally bald except for hair on the head, neck and flippers. It died a month later at the local aquarium.

The Seattle ribbon seal’s story is unknown, but one could be forgiven for thinking it a harbinger of things to come. This week, cold winds from Alaska helped create a record winter storm in Seattle, slamming the metro area with 4 to 8 inches (10 to 20 centimeters) of snow.