Chief Scientists of the Air Force usually spend their time trying to figure out how to build better satellites or make jets go insanely fast. Which makes Dr. Mark Maybury, today’s chief scientist, a bit of an outlier. He’d like to build a set of sensors that peer into people’s souls — and forecast wars before they erupt.

Maybury calls his vision “Social Radar.” And the comparison to traditional sensors is no accident, he tells Danger Room. “The Air Force and the Navy in this and other countries have a history of developing Sonar to see through the water, Radar to see through the air, and IR [infrared] to see through the night. Well, we also want to see into the hearts and the minds of people,” says Maybury, who serves as the top science advisor to the Air Force’s top brass.

But Social Radar won’t be a single sensor to discover your secret yearnings. It’ll be more of a virtual sensor, combining a vast array of technologies and disciplines, all employed to take a society’s pulse and assess its future health. It’s part of a broader Pentagon effort to master the societal and cultural elements of war — and effort that even many in the Defense Department believe is deeply flawed. First step: mine Twitter feeds for indications of upset.

“We’re supposed to provide ISR,” says Maybury, using the military acronym for intelligence surveillance and reconnaissance. “But our constituents [say], ‘Don’t just give me a weather forecast, Air Force, give me an enemy movement forecast.’ What’s that about? That’s human behavior. And so [we need to] understand what motivates individuals, how they behave.”

Maybury, dressed in his preferred outfit — a double-breasted black blazer and silver, rectangular glasses — discussed his Social Radar notion as part of a 90-minute interview in his Pentagon office, his native Massachusetts accent growing thicker as the discussion drew on. An artificial intelligence and language processing specialist, he’s been working for the military, on and off, since the mid-1980s. But as the counterinsurgencies in Iraq and Afghanistan wore on, he found himself drawn further and further into what he calls the “human domain” of combat.

In the last few weeks, the Pentagon may have downgraded counterinsurgency in its strategy revamp. But the need to spot potential troublespots early — and to understand how American actions might impact those restive populations — clearly isn’t going away. U.S. special forces are still training foreign armies (and impacting the people of those countries). The Shadow Wars continue — from Yemen to Pakistan to Mexico. And the geopolitical chess match with China will require deep knowledge of all of the pieces on the board.

Using biometrics, Social Radar will identify individuals, Maybury noted in his original 2010 paper on the topic for the government-funded MITRE Corporation. Using sociometrics, it will pinpoint groups. Facebook timelines, political polls, spy drone feeds, relief workers’ reports, and infectious disease alerts should all pour into the Social Radar, Maybury writes, helping the system keep tabs on everything from carbon monoxide levels to literacy rates to consumer prices. And “just as radar needs to overcome interference, camouflage, spoofing and other occlusion, so too Social Radar needs to overcome denied access, censorship, and deception,” he writes. 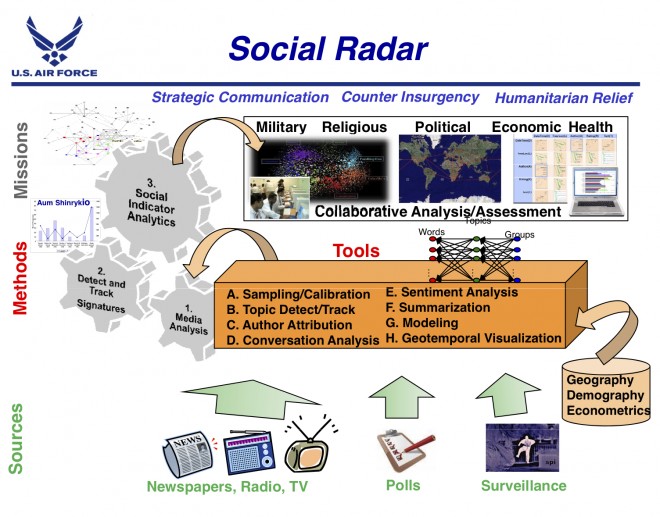 It sounds almost laughably ambitious. And Maybury agrees the notion may be more of a long-term “organizing metaphor” than a particular program. But the building blocks are already being set in place, Maybury insists. In his original paper, Maybury notes that there are efforts underway at the MITRE Corporation that could help make a Social Radar real. For instance, there’s the “Forum and Blog Threaded Comment Analysis (FABTAC)” project, which analyzes online discussions “for intelligence and operations.” There’s “Exploring Soft Power in Weblogistan,” which developed “foundational Farsi and Dari language processing tools to enable analysis of large volumes [of] social media content.”

Most importantly, the language processing specialist says, new tools are coming online to perform what’s called “sentiment analysis” — identification of whether a particular status update is positive or negative. Analyze those sentiments in the aggregate, to see if people are generally content, and associate those feelings with particular geographic regions, and Maybury believes you’ve got the start of a Social Radar. He’s even developed a mock-up of a “Social Radar” desktop, complete with a “heat map” for tracking relative happiness.

The Air Force’s chief scientist isn’t alone in this effort. Over three years, the Pentagon has spent more $125 million on dozens of projects meant to better quantify, model — and, eventually, foresee — the human, social, cultural, and behavioral dimensions of conflict. Several of these “HSCB” systems are now in use in U.S. military units across the globe. Darpa’s Integrated Crisis Early Warning System (ICEWS), for one, is being expanded to cover six of the Defense Department’s geographic commands, covering 175 different countries. Yet within the Pentagon, there are deep divisions over the program’s efficacy.

“Project supporters have marshaled evidence to demonstrate the validity of its approach,” notes one recent internal review of HCSB projects, “while critics have pointed to deficiencies in the scorekeeping method that exaggerate the accuracy of ICEWS forecasts.”

Well-respected retired generals and top military officials have rejected as hopeless the idea that human societies can be effectively modeled, or that human behavior can really be forecasted. “They are smoking something they shouldn’t be,” retired Lt. Gen. Paul Van Riper famously quipped to Science magazine when this push began.

“We do better than human estimates, but not by much,” one Pentagon-funded predictioneer admitted.

And Social Radar is only the leading edge of the Air Force’s effort in the area. The service is boosting its foreign language skills. Maybury wants his more traditional sensors to get better at spotting human behavior. “If I’ve got a radar combined with an [standard camera] combined with an IR, maybe I can tell what kind of action a human is performing,” he says.

And in a presentation about the Air Force’s “contributions” to HCSB efforts, Maybury even lists “Metropolitan Area Persistent Sensing” — city-wide spying — as well as “micro munitions that limit collateral damage” and “non lethal directed energy weapons.” Accompanying the words is a picture of the weapon from the Air Force’s allegedly non lethal arsenal. It’s a ray gun that shoots invisible cousins of microwaves which make people feel like they’re being blasted by an open furnace.

Maybury admits these weapons are not, strictly speaking, part of the Defense Department push to better understand the human aspects of conflict. But “preservation of human life is a premium when one is attempting to generate support of the local population, stability and security while not increasing grievances,” he emails.

Perhaps a fully-functioning Social Radar will be able to gauge the impact of such a weapon on people’s allegiances. But it’s worth noting that, in 2010, when the heat ray was sent to Afghanistan for testing, commanders there shipped it back home without squeezing off a shot.