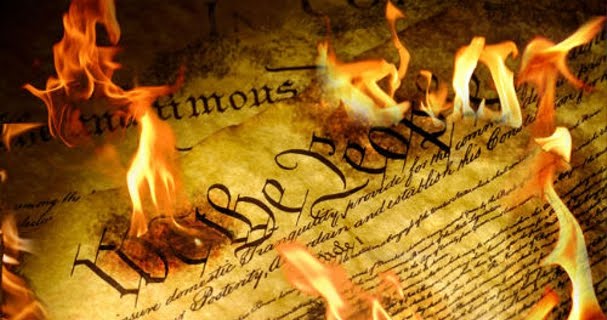 In the aftermath of the signing of the NDAA by the traitorous President Obama, some citizens remain completely hoodwinked by the language of the bill, running around the internet screaming that the law “does not apply to American citizens.”

This is, naturally, part of the side effect of having such a dumbed-down education system where people can’t even parse the English language anymore. If you read the bill and understand what it says, it clearly offers absolutely no protections of U.S. citizens. In fact, it affirms that Americans are subjected to indefinite detainment under “existing authorities.”

Let’s parse it intelligently, shall we?

First off, the offending section of the bill that used to be called 1031 was moved to 1021. Here is the title:

SEC. 1021. AFFIRMATION OF AUTHORITY OF THE ARMED FORCES OF THE UNITED STATES TO DETAIN COVERED PERSONS PURSUANT TO THE AUTHORIZATION FOR USE OF MILITARY FORCE.

The two relevant sections to consider are titled and stated as follows;

(d) CONSTRUCTION. — Nothing in this section is intended to limit or expand the authority of the President or the scope of the Authorization for Use of Military Force.

By PARSING the language here, we must split it into two sentences based on the “or” operator. This statement essentially means:

• Nothing in this section is intended to LIMIT the authority of the President or the scope of the Authorization for Use of Military Force.

• Nothing in this section is intended to EXPAND the authority of the President or the scope of the Authorization for Use of Military Force.

In other words, this section places no limits whatsoever of the “authority of the President” to use military force (against American citizens). Keep that in mind as you read the next section:

(e) AUTHORITIES. — Nothing in this section shall be construed to affect existing law or authorities relating to the detention of United States citizens, lawful resident aliens of the United States, or any other persons who are captured or arrested in the United States.

This section “e” is the section that the hoodwinked people on the internet are running around saying “protects American citizens” from the NDAA. But where do they dream up such language? If you read section (e) again, you’ll discover it says nothing whatsoever about protecting American citizens from the NDAA. Instead, here’s what it really says when parsed into two sentences based on the “or” operator:

• Nothing in this section shall be construed to affect existing AUTHORITIES relating to the detention of United States citizens, lawful resident aliens of the United States, or any other persons who are captured or arrested in the United States.

In other words, section (e) only says that it does not alter “existing authorities” relating to the detention of US citizens.

So to answer the question about whether this affects U.S. citizens, you have to understand “existing authorities.”

What are those “existing authorities?”

As everyone who studies history well knows, the Patriot Act already establishes an “existing authority” that anyone suspected of being involved in terrorist-related activities can be arrested and detained without trial. If you don’t believe me, just Google it yourself. This is not a debated issue; it’s widely recognized.

Furthermore, President Obama already insists that he has the authority to kill American citizens merely by decree! As Reuters reported on October 5, 2011, a “secret panel” of government officials (who report to the President) can decide to place an American citizen on a “kill list” and then murder that person, without trial, without due process, and without even being arrested. (http://www.reuters.com/article/2011…)

Importantly, as Reuters reports, “Two principal legal theories were advanced [in support of the kill list authority] — first, that the actions were permitted by Congress when it authorized the use of military forces against militants in the wake of the attacks of September 11, 2001.”

Are you getting this yet? So the authority ALREADY exists for the President to order the killing of an American citizen. All that is required is that they be suspected of being involved in terrorism in any way, and not a shred of evidence is required by the government to support that. There is no trial, no arraignment, no evidence and not even a hearing. You are simply accused and then disappeared.

Thus, the authority already exists, you see, and the NDAA openly states that “Nothing in this section shall be construed to affect existing AUTHORITIES…”

In other words, the NDAA does nothing to protect American citizens, and it piggy-backs on the Patriot Act as well as Obama’s executive “kill list” justifications to essentially place all Americans in the crosshairs of government murderers or military action.

The key to subsection 1021(e) is its claim that sec. 1021 does not “affect existing law or authorities” relating to the detention of persons arrested on U.S. soil. If the President’s expansive view of his own power were in statute, that statement would be true. Instead, the section codifies the President’s view as if it had always existed, authorizing detention of “persons” regardless of citizenship or where they are arrested. It then disingenuously says the bill doesn’t change that view. (http://www.facebook.com/note.php?no…)

Storing food could get you labeled as a terror suspect

So then, you might be wondering, “What kinds of activities could get me accused of being involved in supporting terrorism?”

And here’s the kicker, because all the following activities could cause you to be arrested, detained, interrogated and even murdered all under U.S. law, thanks to Obama:

• Criticizing the federal government.
• Using cash to purchase things.
• Storing food and medical supplies.
• Owning a firearm and storing ammunition.
• Standing still and minding your own business near a government building.
• Writing something down on a piece of paper near a government building.
• Using a pair of binoculars.
• Protesting for animal rights in front of a medical lab.
• Protesting your government (or Wall Street).
• Requesting to take more than a couple thousand dollars out of your bank account in cash.

You see, under existing authority, you could be labeled a “terror suspect” for engaging in any of these activities, and then LEGALLY arrested, detained, interrogated or even killed by the U.S. government, all under Obama’s authority (or whatever next President takes over in Washington and perhaps does far worse things with that power…)

You are already enemy combatants, folks. The NDAA does absolutely nothing to protect you from its provisions. In fact, it openly states that it does not limit existing authorities — authorities which already claim the right to subject you to indefinite military detention merely for being “suspected” of involvement with “terrorism,” which could be interpreted to apply in practically any situation.

Reading between the lines

Get this through your heads, folks: to properly understand the NDAA (or any other bill), you have to learn to think like lawyers and tyrants.

They don’t just put language right out in plain view that says, “Americans may never be arrested or detained without due process.” Instead, they create a web of legalese statements that are cross-referenced, paraphrased and specifically engineered to obfuscate their intended purpose. This is designed to hide their true intentions, not to make them clear.

Furthermore, if the bill actually intended to protect Americans from the NDAA, then it should have contained language saying something like, “American citizens are specifically excluded from all the provisions of this bill, in its entirety.”

I’ll bet anyone a thousand dollars they won’t find language like that in the bill. Because it doesn’t exist! And the reason it doesn’t exist is because the NDAA is clearly intended to apply to American citizens.

The writers of the bill have managed to fool a lot of everyday people who seem unable to parse language and read plain English with any depth of understanding. That is as much a failure of America’s public education system as anything else. I find it astonishing that today’s citizens can’t even read and understand the grammatical structure of sentences written in plain English. This alone is a highly disturbing subject that must be addressed another day. For now, it’s enough just to realize that the NDAA really does apply to you, me, and all our neighbors and friends. In signing it, Obama has cemented his place in history as the enabler of government-sponsored mass murder of its own citizens.

History does repeat itself after all, huh? Hitler, Stalin, Mao and now “Obama the enabler.” While Obama himself probably won’t engage in the mass murder of American citizens, have no illusions that a future President will try to use the powers enacted by Obama to carry out such crimes. Gingrich, anyone?

2 thoughts on “Myth Busted: Yes, The NDAA Does Apply To Americans, And Here’s The Text That Says So”