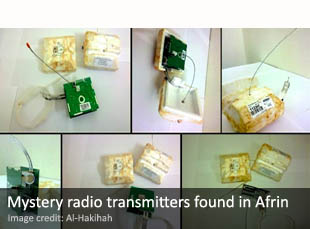 On December 14, residents of a small town in northern Syria reported seeing unidentified aircraft circling overhead, and dropping several small items attached to mini-parachutes. Two days ago, one local resident, Adnan Mustafa, posted on Facebook several photographs of some of these items, which were found scattered around the area.

The gadgets, pictured here, look suspiciously like surreptitious listening devices. Residents say the question is: who dropped them, and why?

The devices were found in the hills around Afrin, a predominantly ethnic-Kurdish town 20 miles south of the Syrian-Turkish border. Local townsfolk said the flight patterns of the planes observed on December 14 resembled those of previous sightings of Turkish aircraft, which routinely invade Syrian airspace before returning to the Turkish air base in Incirlik, about 100 miles north of Afrin.

Syrian newspaper Al-Hakikah (The Truth), which supports the opposition Syrian National Council for Truth, Justice and Reconciliation, said the suspected spy gadgets weigh about 90 grams each and bear “Made in Germany” labels, as well as “GRAW DFM-06” inscriptions. Graw is a Nuremberg-based German company that produces radiosondes, small radio transmitters used in weather balloons, that measure various atmospheric parameters and transmit them to fixed receivers.

But Al-Hakikah reports that the devices found in Afrin seem to transmit GPS coordinates, and appear to have been modified to intercept radio communications. Some suspect that the devices are aimed at eavesdropping on the communications of Syrian government troops and of Syrian Air Force planes, which are engaged in an increasingly bloody conflict against the opposition Syrian National Council.

This, says Al-Hakikah might point to American intelligence agencies, which are known to support the opposition Syrian Free Army, as the originators of the modified radiosondes. But others speculate that the devices may have been dropped by Turkish military planes, in an attempt to monitor suspected activities of the Kurdistan Workers Party (PKK), an armed secessionist group fighting the Turkish state, which is known to operate from bases in northern Syria. Last August, leading Turkish newspaper Zamanpublished a classified report from Turkey’s main intelligence directorate, the MİT, which said that the Syrian government had started to support PKK guerrillas in an attempt to win over Syria’s ethnic Kurds in its fight against the opposition Syrian National Council.