A senior Iranian lawmaker says the ongoing Velayat 90 naval drill aim to send a warning to the West that the Strait of Hormuz will be closed if Iran is threatened.

“The [Iranian] Navy’s military maneuvers in the Persian Gulf and the Sea of Oman indicate the power and dominance of Iran’s Navy in regional waters,” member of the Majlis (parliament) National Security and Foreign Policy Committee Zohreh Elahian said Monday.

“The exercises send an important message to the whole world, especially the colonialist powers…and also show the power of [Iran’s] armed forces, particularly [the country’s] Navy,” she noted.

Elahian added foreign media have admitted that Iran and its Navy are so powerful that if threatened, the country can take control of the Strait of Hormuz as the global economic and energy conduit.

On Saturday, December 24, Iran’s Navy launched a massive 10-day Velayat 90 naval exercise, covering an area stretching from the east of the Strait of Hormuz in the Persian Gulf to the Gulf of Aden.

Different classes of submarines, including Tareq and Qadir, the newest ground-to-sea missile systems and torpedoes have been employed in the maneuvers.

Over the past years, Iran has made important breakthroughs in its defense sector and attained self-sufficiency in producing important military equipment and systems.

The country has repeatedly clarified that its military might is merely based on the nation’s defense doctrine of deterrence and poses no threat to other countries.

As was reported yesterday, Iran has now officially commenced its 10 day wargame exercise in the Straits of Hormuz. What happens next is 10 days in which one false move, either planned or false flagged, can have some serious (if required by the status quo) consequences: after all WTI is at $100, and the ECB has quietly “printed” $700 billion in the past 6 months, with the Fed not far behind – there has to be some implicit backstop to keep crude from soaring once it becomes clear that print mode is on, and the only way that can happen is the “possibility” of expanded oil supply through control of the main supply channels. From Reuters: “Iran began 10 days of naval exercises in the Strait of Hormuz on Saturday, raising concern about a possible closure of the world’s most strategic oil transit channel in the event of any outbreak of military conflict between Tehran and the West. The military drill, dubbed “Velayat-e 90”, comes as the tension between the West and Iran is escalating over the Islamic state’s nuclear programme. Iranian authorities have given no indication the strait will be closed during the exercise, and it has not been shut during previous drills. “Displaying Iran’s defensive and deterrent power as well as relaying a message of peace and friendship in the Strait of Hormuz and the free waters are the main objectives of the drill,” Sayyari said. “It will also display the country’s power to control the region as well as testing new missiles, torpedoes and weapons.”

Some analysts and diplomats believe the Islamic Republic could try to block the strait in the event of any war with the West over suspicions it is seeking atom bombs. Iran’s arch-foes Israel and the United States have not ruled out military action if diplomacy and sanctions fail to rein in Iran’s nuclear work.

Iran says it wants nuclear energy only for peaceful ends.

“The enforcement of the decision to close of the Strait of Hormuz is certainly within Iran’s armed forces’ capability, but such a decision should be made by the country’s top authorities,” Iranian Navy commander Habibollah Sayyari was quoted as saying by the semi-official ILNA labour news agency.

Iran has said in the past that it would respond to any attack by targeting U.S. interests in the region and Israel, as well as closing the strait, the only access channel for eight U.S.-aligned, Gulf Arab states to foreign markets.

“Velayat” is a Persian word for “supremacy” and it is currently used as a title of deference for the Supreme Leader Ayatollah Ali Khamenei.

Those wishing to follow up to date developments on the wargames, and any potential surprises, can do so via the Press TV site.

As the rest of the world enjoys Festivus or whatever celebration one indulges in, Iran is launching a “massive” 10 day war games naval exercise right in the belly of the beast. From Xinhua: “Iranian Navy Commander Rear Admiral Habibollah Sayyari on Thursday announced the upcoming launch of ten-day massive naval exercises in the international waters, the local satellite Press TV reported. Sayyari said at a press conference on Thursday that the naval maneuvers dubbed Velayat 90 will start on Saturday and will cover an area of 2,000 (1,250-mile) km stretching from the east of the Strait of Hormuz in the Persian Gulf to the Gulf of Aden, the report said. This is the first time that Iran’s Navy carries out naval drills in such a vast area, he was quoted as saying. He said that the exercises will manifest Iran’s military prowess and defense capabilities in the international waters, convey a message of peace and friendship to regional countries and test the newest military equipment among other objectives, said the report. He added that the newest missile systems and torpedoes will be employed in the maneuvers, adding that the most recent tactics used in subsurface battles will also be demonstrated. Iranian destroyers, missile-launching vessels, logistic vessels, drones and coastal missiles will also be tested, said the Iranian commander, according to the report.” And while conventional wisdom is that the market is focused on what the upcoming closure of the Straits of Hormuz means for tanker routs and oil prices, there is another more disturbing possibility: with all those Iranian canoes, and soapboxes floating around, one wonders if one is bound to have a close encounter with USS CVN-74 John Stennis, which as the updated naval map below from Stratfor shows, will be smack in the middle of the action. 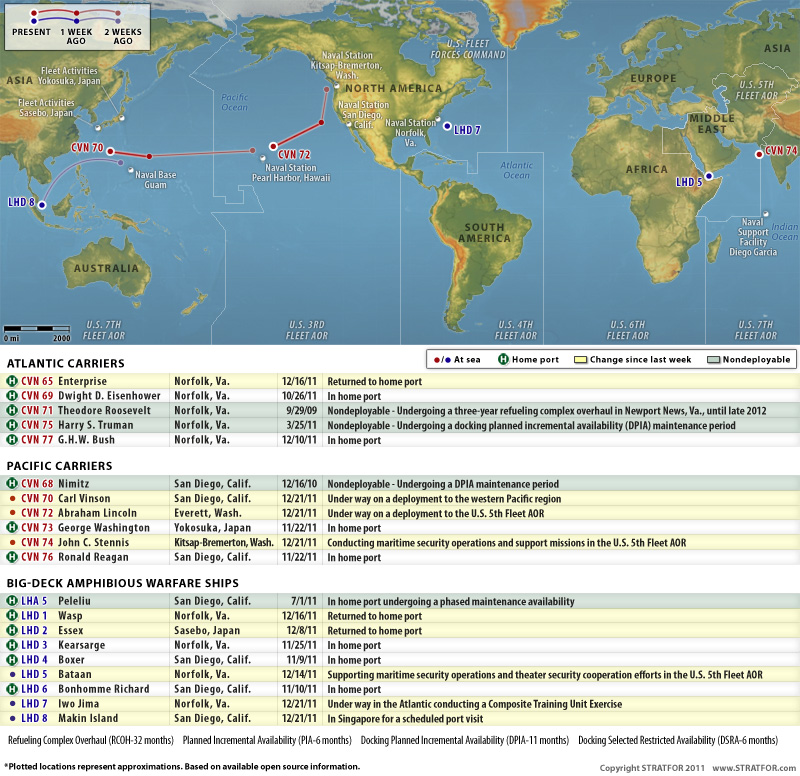 More on this potential powder keg:

Closing Strait of Hurmoz is under full control of Iran, he said but did not mention about the exercise to close it, according to the state IRIB TV website.

Earlier this month, Parviz Sorouri, a member of the Iranian Majlis (parliament) National Security and Foreign Policy Commission, said that Iran plans to practice its ability to close the Strait of Hormuz, one of the world’s most important passages for exports of crude and oil products from littoral states of Persian Gulf.

Iran’s Foreign Ministry spokesman Ramin Mehmanparast said later that closing the Strait of Hormuz is not on Iran’s agenda.

As Iran has announced it several times, the issue of closing the Strait of Hormuz is not on Iran’s agenda since Iran believes in upholding the stability and peace of the region,” said Mehmanparast.

Alas, that’s not the question: the question is what does everyone else believe is the best optics of representing Iran as believing in. Because if a US support vessel has to sink to make popular support for this and that a little more palatable, then sink it will. On its own if it has to.