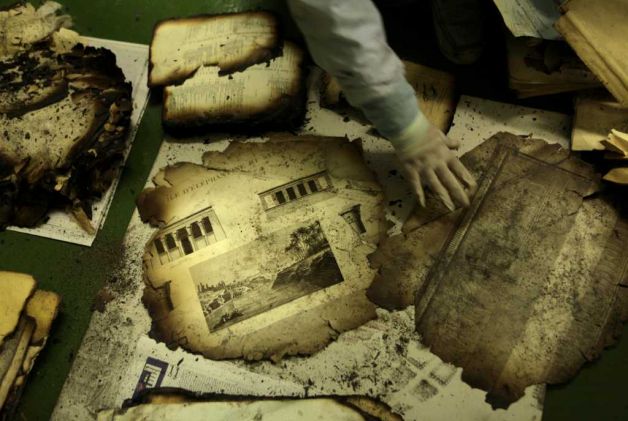 An Egyptian book restoration official arranges burnt pages of the original ancient copy identified as “Le Description de L’Egypt”, (The Description of Egypt,) written by scientists who came with Napoleon Bonaparte’s expedition to Egypt in the late 18th century, which were saved from the research center in Cairo, Egypt, Monday, Dec. 19, 2011. The building was almost completely gutted by a fire which broke out during the height of the clashes on Saturday, when troops on its roof and on other nearby rooftops hurled rocks down on protesters below. Photo: Amr Nabil / AP

CAIRO — Volunteers in white lab coats, surgical gloves and masks stood on the back of a pickup truck Monday along the banks of the Nile River in Cairo, rummaging through stacks of rare 200-year-old manuscripts that were little more than charcoal debris.

The volunteers, ranging from academic experts to appalled citizens, have spent the past two days trying to salvage what’s left of some 192,000 books, journals and writings, casualties of Egypt’s latest bout of violence.

Institute d’Egypte, a research center set up by Napoleon Bonaparte during France’s invasion in the late 18th century, caught fire during clashes between protesters and Egypt’s military over the weekend. It was home to a treasure trove of writings, most notably the handwritten 24-volume Description de l’Egypte, which began during the 1798-1801 French occupation.

The compilation, which includes 20 years of observations by more than 150 French scholars and scientists, was one of the most comprehensive descriptions of Egypt’s monuments, its ancient civilization and contemporary life at the time.

The Description of Egypt is likely burned beyond repair. Its home, the two-story historic institute near Tahrir Square, is now in danger of collapsing after the roof caved in.

“The burning of such a rich building means a large part of Egyptian history has ended,” the director of the institute, Mohammed al-Sharbouni, told state television over the weekend. The building was managed by a local non-governmental organization.

Al-Sharbouni said most of the contents were destroyed in the fire that raged for more than 12 hours on Saturday. Firefighters flooded the building with water, adding to the damage.

During the clashes a day earlier, parts of the parliament and a transportation authority office caught fire, but those blazes were put out quickly.

The violence erupted in Cairo Friday, when military forces guarding the Cabinet building, near the institute, cracked down on a 3-week-old sit-in to demand the country’s ruling generals hand power to a civilian authority. At least 14 people have been killed.

Zein Abdel-Hady, who runs the country’s main library, is leading the effort to try and save what’s left of the charred manuscripts.

“This is equal to the burning of Galileo’s books,” Abdel-Hady said, referring to the Italian scientist whose work proposing that the earth revolved around the sun was believed to have been burned in protest in the 17th century.

Below Abdel-Hady’s office, dozens of people sifted through the mounds of debris brought to the library. A man in a surgical coat carried a pile of burned paper with his arms carefully spread, as if cradling a baby.

At least 16 truckloads with around 50,000 manuscripts, some damaged beyond repair, have been moved from the sidewalks outside the U.S. Embassy and the American University in Cairo, both near the burned institute, to the main library, Abdel-Hady said.

He told The Associated Press that there is no way of knowing what has been lost for good at this stage, but the material was worth tens of millions of dollars — and in many ways simply priceless.

“I haven’t slept for two days, and I cried a lot yesterday. I do not like to see a book burned,” he said. “The whole of Egypt is crying.”

He said that there are four other handwritten copies of the Description of Egypt. The French body of work has also been digitized and is available online.

There may have been a map of Egypt and Ethiopia, dated in 1753, that was destroyed in the fire. However, another original copy of the map is in Egypt’s national library, he said. The gutted institute also housed 16th century letters and manuscripts that were bound and shelved like books.

The most accessible inventory at the moment for what was housed in the institute is in a 1920’s book kept in the U.S. Library of Congress, according to William Kopycki, a regional field director with the Washington D.C.-based library. He said the body of work that was destroyed was essential for researchers of Egyptian history, Arabic studies and Egyptology.

“It’s a loss of a very important institute that many scholars have visited,” he said during a meeting with Abdel-Hady to evaluate the level of destruction.

What remains inside the historic building near the site of the clashes are piles of burned furniture, twisted metal and crumbled walls. A double human chain of protesters surrounded the building Monday.

At a news conference Monday, a general from the country’s ruling military council said an investigation was under way to find who set the building on fire. State television aired images of men in plainclothes burning the building and dancing around the fire Saturday afternoon. Protesters also took advantage of the fire, using the institute’s grounds to hurl firebombs and rocks at soldiers atop surrounding buildings.

A military colonel, helping out with rescue efforts at the library, said about 10 soldiers have been tasked with assisting the volunteers. He asked not to be named because he was not authorized to speak to reporters.

Volunteer Ahmed el-Bindari said the military shoulders the brunt of responsibility for using its roof as a position to attack protesters before the fire erupted.

“When the government wants to protect something, they do,” el-Bindari said. “Try to reach the Interior Ministry or Defense Ministry buildings. You won’t be able to.”