And we know what will happen to terrorists!

This recent investigation of a McDonald’s egg supplier is an example of the type of activism the FBI calls terrorism. YouTube

– FBI Says Activists Who Investigate Factory Farms Can Be Prosecuted as Terrorists (Green Is The New Red, Dec. 20, 2011):

The FBI Joint Terrorism Task Force has kept files on activists who expose animal welfare abuses on factory farms and recommended prosecuting them as terrorists, according to a new document uncovered through the Freedom of Information Act.

This new information comes as the Center for Constitutional Rights has filed a lawsuit challenging the Animal Enterprise Terrorism Act (AETA) as unconstitutional because its vague wording has had a chilling effect on political activism. This document adds to the evidence demonstrating that the AETA goes far beyond property destruction, as its supporters claim.

The animal activists caused “economic loss” to businesses, the FBI says. And they also openly rescued several animals from the abusive conditions. This was not done covertly in the style of underground groups like the Animal Liberation Front — it was an act of non-violent civil disobedience and, as the FBI agent notes, the activists distributed press releases and conducted media interviews taking responsibility for their actions.

Based on these acts — trespassing in order to photograph and videotape abuses on factory farms — the agent concludes there “is a reasonable indication” that the activists “have violated the Animal Enterprise Terrorism Act, 18 USC Section 43 (a).”

The file was uncovered through a FOIA request by Ryan Shapiro, who is one of the activists mentioned. The file is available for download here. [Please note that this document has additional redactions in order to protect the identities of the other activists, at their request.] Shapiro is now a doctoral candidate at MIT. 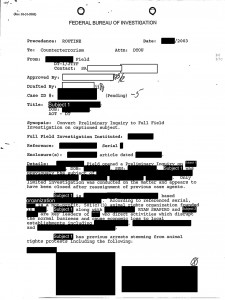 “It is deeply sobering to see one’s name in an FBI file proposing terrorism charges,” he said in an email. “It is even more sobering to realize the supposedly terroristic activities in question are merely exposing the horrific cruelty of factory farms, educating the public about what goes on behind those closed doors, and openly rescuing a few animals from one of those farms as an act of civil disobedience.”

When I testified before Congress against the AETA in 2006, one of the primary concerns I raised is that the law could be used to wrap up a wide range of activity that threatens corporate profits. Supporters of the AETA have repeatedly denied this, and said the law will only be used against people who do things like burn buildings.

So how do we explain that such a sweeping prosecution was being considered in 2003, under the law’s somewhat-narrower precursor?

One possibility is that FBI agents lack training, education, and oversight. They are spying on political activists without understanding or respecting the law.

Another explanation is that this document is no mistake, nor is it an isolated case. It is a reflection of a coordinated campaign to target animal rights activists who, as the FBI agent notes, cause “economic loss” to corporations.

At the state, federal, and international levels, corporations have orchestrated an attempt to silence political activists, and a key target has been undercover investigators. For example:

The FBI makes clear that the Animal Enterprise Terrorism Act is not about protecting public safety; it is about protecting corporate profits. Corporations and the politicians who represent them have repeatedly lied to the American public about the scope of this legislation, and claimed that the law only targets underground groups like the Animal Liberation Front. The truth is that this terrorism law has been slowly, methodically expanded to include the tactics of national organizations like the Humane Society of the United States.

This document illustrates how the backlash against effective activism has progressed within the animal rights movement. However, if this type of legislation is not overturned, it will set a precedent for corporations to use this model against Occupy Wall Street and anyone else who threaten business as usual.