Yields on short-term peripheral sovereign bonds are plunging, despite the fact that EU leaders appeared to make little progress at their highly-anticipated summit last week.

Pundits continue to expound on the flaws of the eurozone but markets are telling a different tale.

That’s because the European Central Bank may have already introduced roundabout measures that will solve some of Europe’s big problems—it’s making investing in peripheral sovereign debt a huge profit opportunity for banks.

Theoretically, financial institutions will be able coin money by borrowing ultra-cheap from the ECB and buying higher yielding sovereign debt.

Finally, the extension of loan maturities to a full three years means that banks would be able to borrow money for the long-term, presumably long enough for EU leaders to make more progress towards solving the flaws of the euro monetary union.

While analysts on the whole had expected the ECB to announce changes to long-term lending to banks (LTROs) in their monetary policy decision last week, the buzz is that the measures may have been far beefier than people realized — this was argued to us by Lorcan Roche Kelly, Chief Europe Strategist at Trend Macrolytics.

The details of how the ECB means to relax collateral have not yet been released. The Bank currently accepts collateral rated as low as A-, although debtors must pay a penalty based on asset risk. Were even riskier assets allowed to be used as collateral or if the penalty were dropped, this would provide significant incentive for banks to purchase sovereign debt, particularly given currently high yields on bonds. If it worked, it would be the ultimate carry trade—borrowing from the ECB is now a cheap 1%, so banks could see huge returns on sovereign debts with high yields.

That would hike demand for sovereign debt in countries that have currently seen high borrowing costs, bringing down yields on sovereign bonds, and thus making it easier for PIIGS sovereigns to finance their debt.

This explains the dramatic drop in yields on sovereign debt, particularly that which will mature in less than three years. Check out the recent yield action on Spanish 2-year debt. 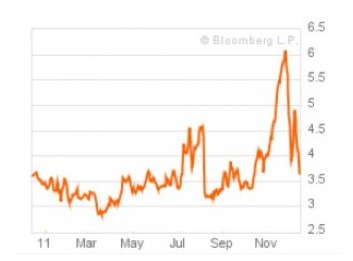 Changing collateral policy is not without significant risk to banks, and consequently ECB’s balance sheet. From Citi’s Steve Englander:One issue for the banks is that if they were to do the ECB’s job and stop the sell off in the European sovereign debt markets, they would be exposed to PSI-type restructuring, despite the insistence of euro zone governments that PSI will never extend beyond Greece. We suspect that it will be very difficult for the euro zone core countries to pre-commit to absorb credit risks related to Italy and/or Spain. While more bailouts could help market sentiment, the fact that the official lenders (the likes of the IMF and the ECB) are still perceived as more senior to private bond holders could reduce the positive impact of the measures even if PSI is not part of the deal ex ante.

Essentially, this new policy is really a test of confidence. If banks believe that countries like Italy and Spain can continue to pass austerity measures and that EU leaders will continue to move towards fiscal consolidation that will make the euro area more stable in the future, then they will buy PIIGS sovereign debt buy the bushel, as there is no limit to the ECB’s funding policy. If not, then they won’t buy enough and the crisis will continue to intensify.

These new collateral guidelines will probably go into effect as early as next week, at the first 3-year funding offering. the results of the next 3-year LTRO offering will be published on Wednesday. So by this time next week, the euro crisis could be over—or it could be far worse than the ECB imagined.