And yes, those lasers will be really bad for your eyesight. 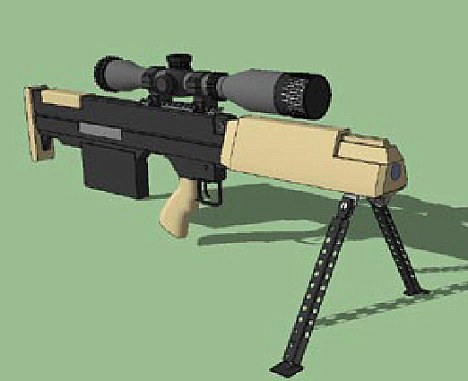 James Bond-style: The SMU 100 temporarily impairs the vision of anyone looking towards its source with a four metre wall of light

The makers of a “non-blinding” laser claims an unnamed UK police force is set to trial the weapon as a means of “controlling riots.” According to the manufacturer — who developed the weapon for use against pirates in Somalia — the laser can “temporarily” blind its victims at 500m. It is meant to provide “an intimidating visual deterrent” because “If you can’t look at something you can’t attack it.”

My friend Sulka, who brought this to my attention, has some informed speculation about what “non-blinding” might mean. He notes that the UK is a signatory on the Protocol on Blinding Laser Weapons (I didn’t know this existed, and I’m both glad and sad that it does), whose definition of blindness “is where your eyesight goes worse than 20/200, meaning you can’t see the *largest* letter in a Snellen chart when looking at it with *both* eyes.”

So that means that this weapon wouldn’t run afoul of international law if it (merely) reduced your vision to the point where you were impaired but not legally blind, permanently.

Meanwhile, Twitter wags are already predicting a resurgence of mirrorshades among protesters, which means that everything the cyberpunks predicted in the mid-80s is finally coming true. I always thought that Anon was basically an analog to the Panther Moderns.

The laser was originally designed to protect sensitive cargo from pirates on the high seas.  Likewise, NATO-led troops have already deployed similar weapons to counter insurgents in Afghanistan.

A shoulder-mounted laser that emits a blinding wall of light capable of repelling rioters is to be trialled by police under preparations to prevent a repeat of this summer’s looting and arson.

The technology, developed by a former Royal Marine commando, temporarily impairs the vision of anyone who looks towards the source.

It has impressed a division of the Home Office which is testing a new range of devices because of the growing number of violent situations facing the police.

The developer, British-based Photonic Security Systems, hopes to offer the device to shipping companies to deter pirates. Similar devices have been used by ISAF troops in Afghanistan to protect convoys from insurgents.

The laser, resembling a rifle and known as an SMU 100, can dazzle and incapacitate targets up to 500m away with a wall of light up to three metres squared. It costs £25,000 and has an infrared scope to spot looters in poor visibility.

Looking at the intense beam causes a short-lived effect similar to staring at the sun, forcing the target to turn away.

“The system would give police an intimidating visual deterrent. If you can’t look at something you can’t attack it,” said Paul Kerr, the firm’s managing director, told The Sunday Times.

“If police spot someone trying to do something untoward, painting them with this would certainly make them think twice about it,” he said. He said it could also be deployed during hostage rescues.

The Home Office has been considering new forms of non-lethal equipment since the August riots, with the limited range of tasers and CS gas leaving a “capability gap”.

A Home Office spokesman said scientists at its Centre for Applied Science and Technology believe the use of lasers “has merit” and that it will be piloted by at least one police force. However, they will have to be satisfied the technology does not cause long-term health damage before it can be approved by the Home Secretary.

Other technology being studied includes ‘wireless electronic interceptors’ that can be fired a greater distance than Tasers, and long-range chemical irritant projectiles, the newspaper said.

The Metropolitan Police is exploring the possibility of buying three water cannons at a cost of £4m. Currently the only police force in the UK to operate water cannon is the Police Force of Northern Ireland (PSNI), which has six. Scotland Yard is also increasing the number of officers trained to fire plastic bullets, as a direct response to the riots.