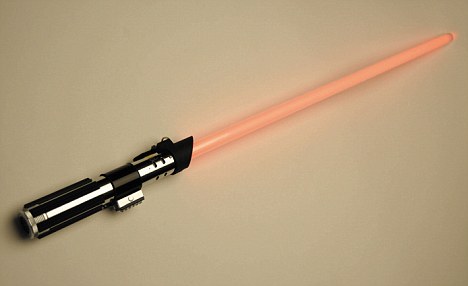 Weapon of choice: The man managed to break the wires of the Taser free using the toy lightsaber, similar to this one

They might be one of the more feared tools at the disposal of the police.

However, it would seem the mighty Taser was no match for a humble plastic lightsaber after a man managed to fend off officers as they tried to arrest him inside a toy store.

Police in Portland, Oregon, were on the receiving end of ‘The Force’ when they tried to take down a suspect with the electroshock weapon – and he retaliated using the children’s toy with surprising success.

Officers had been alerted to an incident inside a Toys R Us in Jantzen Beach after a man allegedly used a toy lightsaber to attack people.

According to police, by the time officers arrived three people had been assaulted by a man brandishing the toy.

Officers said they tried to calm the man down but he kept swinging the lightsaber and shouting incoherently.

So they then tried to use a Taser on him, but the man managed to break the wires free using the toy.

Abandoning the Taser attempts, police then wrestled the man to the ground before taking him into custody.

David Canterbury, who was arrested at the scene, was treated for injuries and taken to a hospital for a mental evaluation.

Pete Sampson, from Portland Police, said the man was not wearing an outfit at the time he carried out the attack.

He added: ‘We believe he used a blue light sabre but he was not dressed as a Jedi at the time.’

Canterbury was put under police detention while at the hospital and given citations for three counts of fourth-degree assault, one count of third-degree theft, one count of resisting arrest and one count of interfering with a police officer.