And so the inevitable has happened: the European currency finally fell below that strange attrractor level of 1.3000 following an Italian 5 year auction that despite the “technical” clarification that it would be of Off The Run bonds, still ended up being the highest rate ever paid for a 5 Year piece of Italian paper. As Reuters explains, the euro slipped versus the dollar on Wednesday after Italy paid a euro era record yield of 6.47 percent to sell five-year debt, adding to concerns that an EU summit last week had made little progress in tackling the region’s debt crisis. More: “Italy paid a euro era record yield of 6.47 percent to sell five-year paper at its first auction of longer-term debt after the EU moved towards greater fiscal integration at last week’s summit, but failed to convince markets it can solve the debt crisis. The average yield at Wednesday’s sale compares with an auction rate of 6.29 percent Italy paid a month ago, which was also a euro lifetime record high. Rome sold 3 billion euros of the Sept. 2016 BTP bond, the top of an unusually small range of 2 billion to 3 billion euros for the sale. Italy has trimmed the size of its auctions in reaction to market pressure but it will have to step up issuance in coming months if it is to meet a gross funding goal of around 440 billion euros next year.” And result: EURUSD < 1.3000 which means bad things for the record high correlated stock market… and the Christmas Rally. 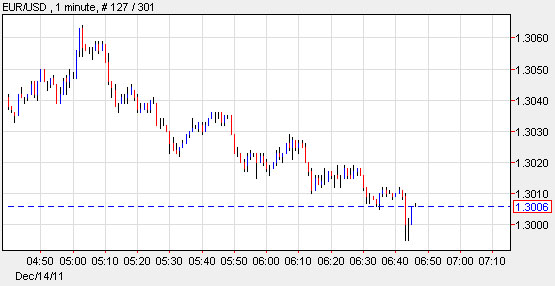