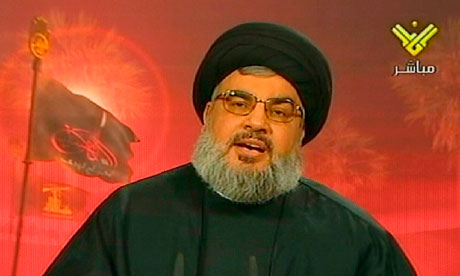 Hezbollah chief Hassan Nasrallah revealed in June that his group had identified at least two spies working for the CIA. Photograph: AFP/Getty Images

Hezbollah has revealed the identities of CIA officers working undercover in Lebanon, a blow to agency operations in the region and the latest salvo in an escalating spy war.

The militant group made the names public in a broadcast on Friday night on a Lebanese television station, al-Manar. Using video animations, the station recreated meetings purported to take place between CIA officers and paid informants at Starbucks and Pizza Hut outlets. The officers met with informants at locations more than once, a procedure frowned upon because it risks exposure.

The disclosure comes after Hezbollah managed to partially unravel the agency’s spy network in Lebanon after running a double agent against the CIA, former and current US intelligence officials said. They requested anonymity to discuss matters of intelligence.

In June, the Hezbollah chief, Hassan Nasrallah, revealed his group had identified at least two spies working for the CIA. It is not clear whether one of those spies was the same double agent working for Hezbollah, considered a terrorist group by the US. Nasrallah has called the American embassy in Beirut a “den of spies”.

The incident happened despite top CIA officials being warned to be vigilant when handling informants after Hezbollah and Lebanese officials arrested scores of Israeli spies in 2009. The outing of the officers is particularly damaging because it will hinder the ability of these CIA employees to work overseas, especially as references to their names will be widely available to other foreign intelligence agencies online.

The CIA has dismissed Hezbollah’s assertions. “The agency does not, as a rule, address spurious claims from terrorist groups,” Jennifer Youngblood, a spokeswoman for the agency, said. “I think it’s worth remembering that Hezbollah is a dangerous organisation, with al-Manar as its propaganda arm. That fact alone should cast some doubt on the credibility of the group’s claims.”

Former officials said one of the named officers was a rising star at the CIA and had been involved in many important operations in Iraq. Whether or not this employee would be able to continue their career with the agency outside the US is unknown. Former officials said it was likely Hezbollah had shared photographs of the officers with Iran, its closest ally.

It was not immediately clear whether the named CIA officers in Lebanon had left the country.

CIA officers have had their identities revealed in the past. The last instance came a year ago when the name of the agency’s Pakistan chief was leaked to reporters. The CIA initially allowed him to stay in the country but later decided it was too dangerous for him to remain there.

The disclosure sends a sharp warning to the CIA to stay out of Lebanon, with Hezbollah suggesting it could have captured the officers at any time. In 1984 the militant group kidnapped the CIA’s Beirut chief. He was tortured and later killed.

Al-Manar said the CIA team in Lebanon consisted of 10 officers and all used diplomatic cover. Their jobs were to oversee intelligence networks in Lebanon, it added.