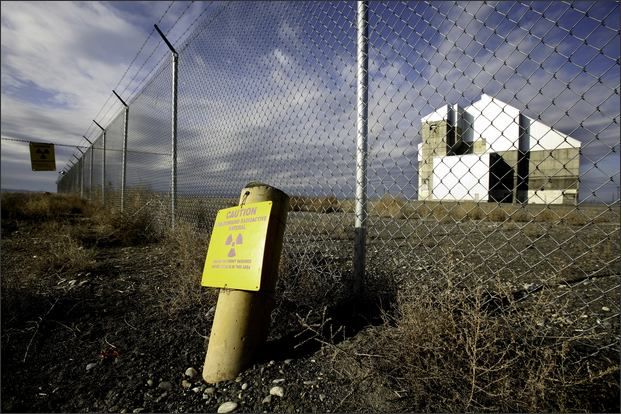 The H reactor is one of nine nuclear reactors at Hanford, where it is feared that contaminated groundwater is moving steadily toward the Columbia River and posing a danger to fish and the people who eat them.
Photo: Seattle Post-Intelligencer

RICHLAND, Wash. — The federal government says a one-of-a-kind plant that will convert radioactive waste into a stable and storable substance that resembles glass will cost hundreds of millions of dollars more and may take longer to build, adding to a string of delays and skyrocketing price tag for the project.

In addition, several workers at southeast Washington’s Hanford nuclear reservation have raised concerns about the safety of the plant’s design — and complained they’ve been retaliated against for voicing their issues.

The turmoil has some in the Pacific Northwest uneasy about the plant’s long-term viability and fearful that a frustrated Congress could balk at paying more money for a project long considered the cornerstone of cleanup at the highly contaminated site.

“The risk from the materials we are dealing with over there is simply too great (not to complete the plant),” Washington Gov. Chris Gregoire said in a recent interview with The Associated Press. “Here, we thought we were making such progress, and now to learn that, for reasons I don’t know, we’re at serious risk of missing more milestones is disappointing.”

Issues raised by the whistleblowers about the plant’s safety would be equally disconcerting, Gregoire said.

Roughly one-third of the federal government’s entire budget for nuclear cleanup — about $2 billion each year — goes to Hanford, and nearly a third of that goes to construction of the plant. Last month, U.S. Rep. Edward J. Markey, D-Mass., demanded that the Energy Department provide an accurate statement of costs and schedule for the facility, and answer questions pertaining to safety complaints.

Markey is a senior member of the House Energy and Commerce Committee.

Dave Huizenga, the DOE’s acting assistant secretary for environmental management, said the agency remains committed to building a safe, efficient plant. But he also said technical problems and differences of opinion are not unusual on a project so large and complex.

“We know we have to be really transparent with these issues, and they have to be addressed,” he said. “We know the confidence that residents of the Pacific Northwest put in us. That rests with us every day.”

The federal government created Hanford from a dusty stretch of land at the height of World War II, when thousands moved to the remote area for a top-secret project to build the atomic bomb. A city of thousands was born, and the site went on to produce plutonium for the bomb that was dropped on Nagasaki, Japan, and for the nation’s nuclear weapons arsenal throughout the Cold War.

Plutonium production also left behind a slew of waste and debris in trenches, buildings and underground tanks, making Hanford one of the most challenging cleanup projects in the world.
There have been successes in recent years. Spent nuclear fuel was removed from two water-filled pools near the Columbia River, dozens of buried waste sites have been dug up and workers continue to monitor and treat contaminated groundwater.

But the worst of the waste is still decades away from being completely removed. Millions of gallons of a highly radioactive stew — enough to fill dozens of Olympic-size swimming pools — are stored in aging underground tanks. Some of those tanks have leaked, threatening the groundwater and the river.

The plant is being built to convert much of that waste into glasslike logs — a process called vitrification — for permanent disposal underground. A massive undertaking, the plant will stand 12 stories tall and be the size of four football fields once completed, but technical problems have resulted in multiple delays and cost increases.
The price tag already has grown from $4.3 billion to $12.3 billion. The U.S. Department of Energy, which manages Hanford cleanup, recently announced additional costs of at least $800 million, as well as the possibility of additional delays.

The plant is currently scheduled to begin testing in 2019.

The revelations about higher costs and potential delays came as two Hanford workers filed suit as whistleblowers, claiming they were targeted for reprisals after raising safety concerns. The largest of the safety complaints deal with specifications for the process by which the waste would be mixed. The whistleblowers say, as specified, it could result in dangerous gas concentrations as well as a settling of waste within the mixing vessels.

Those issues largely center on a pretreatment building where the worst waste will be funneled before moving on to other parts of the plant. Any problems there would be significant because workers will not be able to enter certain areas once operations commence because of high levels of radioactivity.

Walt Tamosaitis, one of those whistleblowers, estimates the plant will end up costing taxpayers $20 billion because too many questions remain unanswered about the plant’s overall design. He said his fear is that the plant, even after all that money, will not operate as it should.
“Congress should grab the Energy Department by the ears,” he said. “Change has got to be made so that the plant operates safely and efficiently, which means it completes its mission in 40 years, and the safety culture has to change.”

Tamosaitis called for work to stop on the pretreatment portion of the plant until all of the questions can be resolved.

The Energy Department maintains that any questions about gas buildup have been addressed, and a large-scale testing program has been launched to try to resolve the problems with the mixing vessels. Adequate mixing of the waste has been a technical concern for years.

Huizenga said the plant could easily begin operating without an immediate solution to the most troublesome waste, though he conceded that it’s possible some waste may have to be mixed elsewhere, before it comes to the plant, which would be an added cost.

He also didn’t rule out pausing construction on the plant’s pretreatment facility if necessary.
“We’re still concerned that we have these issues, and we’re continuing to work them every day. We will not operate a facility that cannot be operated safely,” he said.

Design of the plant is 85 percent complete, and construction is more than 50 percent complete.
A Defense Nuclear Facilities Safety Board review earlier this year raised concerns about the treatment of employees who raise safety concerns and recommended changes. The Energy Department’s response is due next month.

A more recent report by an independent team of nuclear experts hired by Bechtel found no evidence that the contractor or the Energy Department had suppressed technical dissent by employees.

The number of technical issues that have been raised — and resolved — on the massive project far outnumber those that still remain, said Rick Kacich, Bechtel’s assistant project director for integration. And the effort to find the best nuclear experts to review its design, which was created by hundreds of experienced engineers, speaks to the importance Bechtel has placed in the project, he said.

“There’s really only one type of issue we can’t solve, and that’s the issue we don’t know about,” he said. “We not only encourage people, we expect them to raise questions about a first-of-a-kind facility.”

Tom Carpenter of the worker advocacy group Hanford Challenge immediately criticized the latter report, calling it a “soft-pedaling” of the safety concerns.

He said the Energy Department and its contractors are too focused on meeting deadlines and ensuring that the contractors get paid their fees, over the objection of some of their best technical minds.