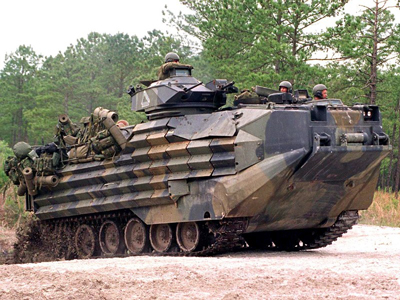 – The Pentagon Is Offering Free Military Hardware To Every Police Department In The US (Business Insider, Dec. 5, 2011):

The U.S. military has some of the most advanced killing equipment in the world that allows it to invade almost wherever it likes at will.

We produce so much military equipment that inventories of military robots, M-16 assault rifles, helicopters, armored vehicles, and grenade launchers eventually start to pile up and it turns out a lot of these weapons are going straight to American police forces to be used against US citizens.

Benjamin Carlson at The Daily reports on a little known endeavor called the “1033 Program” that gave more than $500 million of military gear to U.S. police forces in 2011 alone.

1033 was passed by Congress in 1997 to help law-enforcement fight terrorism and drugs, but despite a 40-year low in violent crime, police are snapping up hardware like never before. While this year’s staggering take topped the charts, next year’s orders are up 400 percent over the same period.

This upswing coincides with an increasingly military-like style of law enforcement most recently seen in the Occupy Wall Street crackdowns.

Tim Lynch, director of the Cato Institute’s project on criminal justice told The Daily, “The trend toward militarization was well under way before 9/11, but it’s the federal policy of making surplus military equipment available almost for free that has poured fuel on this fire.”

Thanks to it, cops in Cobb County, Ga. — one of the wealthiest and most educated counties in the U.S. — now have an amphibious tank. The sheriff of Richland County, S.C., proudly acquired a machine-gun-equipped armored personnel carrier that he nicknamed “The Peacemaker.”

This comes on top of grants from the Department of Homeland Security that enable police departments to buy vehicles such as “BearCats” — 16,000-pound bulletproof trucks equipped with battering rams, gun ports, tear-gas dispensers and radiation detectors. To date, more than 500 of these tank-like vehicles have been sold by Lenco, its Massachusetts-based manufacturer, according to a report in the Orlando Sentinel.

“It’s kind of had a corrupting influence on the culture of policing in America,” Lynch says. “The dynamic is that you have some officer go to the chief and say, people in the next county have [military hardware], if we don’t take it some other city will. Then they acquire the equipment, they create a paramilitary unit, and everything seems fine.

“But then one or two years pass. They say, look we’ve got this equipment, this training and we haven’t been using it. That’s where it starts to creep into routine policing.”