We will simply copy and paste, with the appropriate adjustments, the form text we put up after each and every NFP report calculating the number of people that have to be added by the end of a hypothetical second Obama term. Using the November boilerplate: “Every few months we rerun an analysis of how many jobs the US economy has to generate to return to the unemployment rate as of December 2007 when the Great Financial Crisis started, by the end of Obama’s potential second term in November 2016. This calculation takes into account the historical change in Payroll and includes the 90,000/month natural growth to the labor force, and extrapolates into the future. And every time we rerun this calculation, the number of jobs that has to be created to get back to baseline increases: First it was 245,500 in April, then 250,000 in June, then 254,000 in July then 261,200 in October [and finally 262,500 in November] . As of today, following the just announced “beat” of meager NFP expectations, this number has has just risen to an all time high 262,500 263,700. This means that unless that number of jobs is created each month for the next 5 years, America will have a higher unemployment rate in October 2016 than it did in December 2007. How realistic is it that the US economy can create 15.8 million jobs in the next 61 60 months? We leave that answer up to the US electorate.” 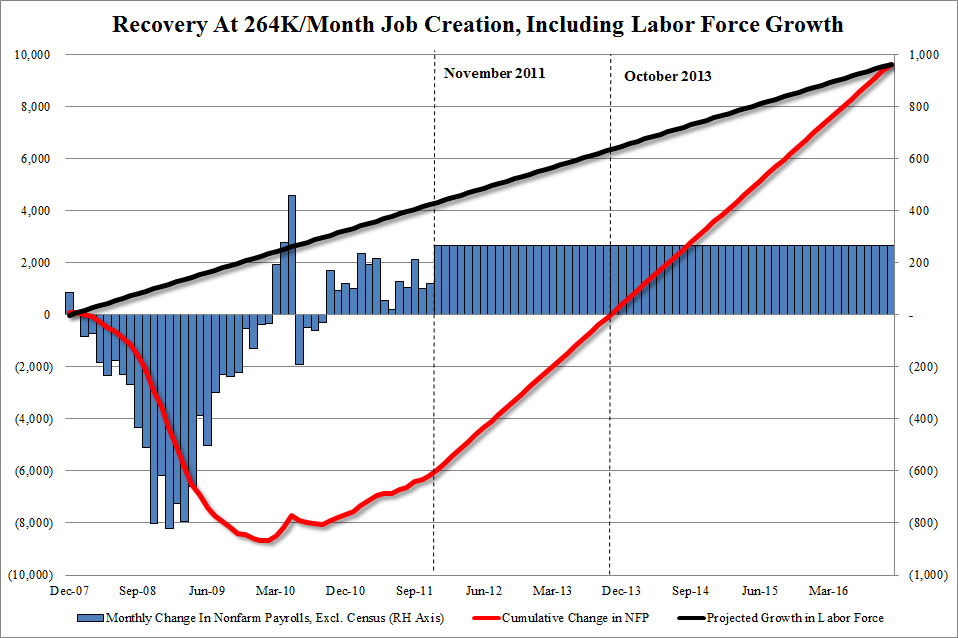