The Russians immediately understood that the missile defense shield was aimed at them and was never about protecting Europe from Iran as it has been portrayed by MSM.

Update (Medvedev’s full must watch address to the public):

Dmitry Medvedev, the Russian president embraced the fiery rhetoric of the Cold War threatening to target and if necessary destroy America’s planned European missile defence shield once it is built. 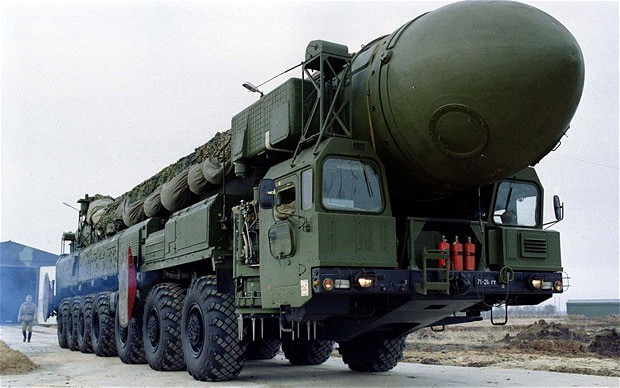 In what may be the most serious blow to US-Russia relations since President Barack Obama came to power, Mr Medvedev raised the prospect of Russia launching missile attacks on European Union member states such as Poland, Romania and Spain as well as Nato member Turkey.

“I have given the armed forces the task of drawing up plans to destroy the information and command and control systems of the (US/Nato) anti-missile shield,” he said.

“Our Nato partners are not for now showing any readiness to take our concerns about the architecture of the European missile shield into account, something which convinces us that their plans are aimed at Russia.” Upping the ante further, he said Russia’s anxiety was so great that it would reserve the right to tear up existing nuclear arms control treaties and halt talks about new treaties.

The White House immediately rebuffed Mr Medvedev, making it clear Washington would not be altering its plans in any way.

“We will not in any way limit or change our deployment plans in Europe,” said Tommy Vietor, a National Security Council spokesman. “In multiple channels, we have explained to Russian officials that the missile defence systems planned for deployment in Europe do not and cannot threaten Russia’s strategic deterrent.”

The shield that Russia objects to so strongly is designed to shoot down missiles from rogue states such as Iran but is years away from being operational. Turkey, Poland, Romania and Spain have all agreed to join what is a diluted version of a controversial plan first proposed by former President George W. Bush.

The Kremlin has dismissed US assurances as meaningless and initially demanded and was refused the right to be an equal partner in the project.

In practice, that would have meant granting Moscow so-called “red button” rights, giving the Russian military an operational say in when and if a rogue missile was physically shot down.

Giving America’s former Cold war foe such a big say in such a sensitive military system was regarded as politically unacceptable in Washington which has tried to repair damaged Russian pride by offering to share detailed information about the system.

But Russia has rejected those overtures and is now demanding legally binding guarantees from Washington that the new system will never be used against Russia.

Mr Medvedev, who is due to step down from the Russian presidency next May in favour of his mentor Vladimir Putin, did not therefore pull his punches.

Detailing a long list of concrete military steps his country would now take, he threatened a series of political counter measures that, if implemented, would take Russia’s relations with the West back to the Cold War.

The measures he ordered to be taken included extending the targeting range of Russia’s strategic nuclear missile forces, installing a missile early warning system in Russia’s Kaliningrad exclave, and re-equipping Russian’s nuclear arsenal with new warheads that would allegedly be capable of piercing the nascent defence shield.

“The (missile) shield is causing us concern,” he explained. “The fact is that it foresees the deployment of missiles and other anti-missile systems close to the Russian border and in areas close by.” If necessary, he said Russia would deploy Iskander missiles, which are believed to have a range of 310 miles, in the Kaliningrad exclave that borders EU members Poland and Lithuania. The same missiles could also be deployed in southern Russia close to Georgia and Turkey, he added.

Accusing the United States of ignoring Russian concerns and presenting it with a fait accompli, he said the Kremlin could not sit idly by and watch Washington build a missile system that would alter the balance of nuclear weapons in America’s favour.

“We will not agree to take part in a programme that in a relatively short period of time, in 5, 6 or perhaps 8 years time is capable of weakening our (nuclear) deterrent potential. (And) this is precisely what the European missile defence shield has started to turn into reality.”

Russian opposition politicians claimed Mr Medvedev’s unusually hawkish declaration was an attempt to drum up nationalist votes ahead of a parliamentary election next month by trying to exploit the idea of an external enemy.

“They just forgot that the arms race led to the collapse of the Soviet Union,” said opposition leader Boris Nemtsov. Mikhail Kasyanov, a former prime minister turned Kremlin critic, said Mr Medvedev was doing Mr Putin’s bidding and artificially creating tensions that his master could later defuse. He said: “Medvedev is continuing to play his role which is drawing negative reaction to clear the way for the Putin manoeuvre.”