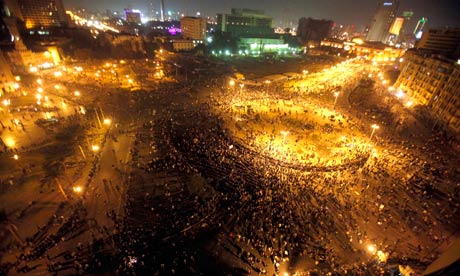 Amid the gloom, the smoke and the deafening chants of thousands around them, the middle-aged couple looked like they had been photoshopped on to the scene. He was wearing a smart jacket, she a dress and a headscarf. They both walked silently forwards across the debris, hand in hand and staring straight ahead. Each was carrying a rock.

The scene was Talaat Harb street, usually one of downtown Cairo’s busiest thoroughfares and a shopping mecca for cut-price shoes and clothing, just after darkness fell across the capital on Sunday evening. The store shutters were down and the dying and the injured were propped up against them. Ahead, beyond a wall of teargas, stood the troops of Egypt’s once-venerated army, and the new frontline of this country’s reawakened revolution.

The ruling junta’s slow transformation from heroes of the uprising to the focus of its wrath has taken many months, and left far too many victims in its wake. Some, like outspoken radical Alaa Abd El Fattah or critical blogger Maikel Nabil, are behind bars; the latter’s hunger strike is now entering its 90th day. Others, like Mina Daniel – shot from two directions last month as he called for the rights of Egypt’s minorities – and police torture victim Essam Atta, now lie cold below the ground.

Throughout those crises a small and dedicated group of activists attempted to galvanise popular resistance, but failed to make much headway with the broader Egyptian population who saw the Supreme Council of the Armed Forces (Scaf) as a necessary pillar of stability in troubled times, despite the processing of 12,000 ordinary civilians through military tribunals – more in 10 months than Mubarak managed in 30 years.

In the end, the tipping point emerged from an unexpected source: a piece of constitutional legalese which would have shielded the army from political oversight for decades to come and given it an effective veto over the writing of a new constitution. The document was pushed by the military to Egypt’s often-pliant political elite, which finally balked at the idea of having less power than they imagined in a Scaf-dominated future.

The marches and protests that followed last Friday attracted the largest crowds since Mubarak was toppled, an early indication that concern about the junta and scepticism of their heavily curated vision of democratic transition was beginning to go viral. As usual, the security forces – whose much-promised root-and-branch reform has proved as illusory as their claims of “admirable” self-restraint during the bloodshed this weekend – waited until numbers had dwindled before launching their assault the next morning.

They thought they were battering a rump, but instead the 200 or so demonstrators still camped out in Tahrir proved to be fuel for a fire which is now sweeping the nation.

By Sunday morning, following 24 hours of fierce street fighting and the conquest of Tahrir by revolutionaries, the furniture of the anti-Mubarak uprising was once again wheeled into place in the capital. Civilian checkpoints dotted the square, corrugated iron sheets were torn down for barricades, and the makeshift field hospital – the scraggiest, saddest and often most inspiring cog in the revolution’s street battles – was back in action, treating hundreds of youths ferried in by motorbike from the edge of no-man’s land, which lay just a couple of blocks away.

“We’ll stay here until we die, or military rule dies,” said 27-year-old Mahmoud Turg with a matter-of-fact intensity. One side of his face was bandaged because a rubber-coated steel bullet had hit his ear; another had carved a chunk out of his back. “Scaf must leave, because the people have seen through them,” added the political researcher. “It has taken a long time, but the mask has slipped.”

On the battlefront, order prevailed through the chaos. Scouts and lookouts took to the balconies with their faces wrapped in scarves against the gas; on their instruction waves of protesters surged forward towards the police lines hurling rocks and molotovs, only to be beaten back by a blitz of teargas canisters and a volley of “birdshot” pellet cartridges, almost always aimed at head height. Those staggering blindly towards safety would quickly be supported by those who had stayed behind, with rows of revolutionaries spaced out across the rubble-strewn street handing out tissues and firing short bursts of cooling fluids into burning eyes.

It’s a paradox of this year’s vast political upheavals across the Arab world that liberation struggles feel simultaneously so local and so global. As the sun began to set, other side streets around Tahrir took on the eerie quality of discarded warzones specked with flashes of ordinary life; two blocks away you could get a shisha – carefully balanced on the paving stones now ripped up and broken in the search for something to throw – while the occasional taxi, having taking a wrong turn, would sail by bewildered.

Except for the thuds and cracks in the air, one could imagine the violence was miles away, yet at the same time it had never felt as intimately close. Activists showed each other Twitter, Facebook and SMS updates from every stretch of the Nile, from Alexandria to Aswan, indicating that all four corners of Egypt were once again in revolt. Others held up teargas cartridges with the name and address of a Pennsylvania company stamped across it; some wondered aloud whether protesters in Cairo and America were being hit by weaponry produced by the same firm.

When the military attack finally came, dissolving once and for all any lingering boundaries in protesters’ minds between the army on the one hand and the hated black-clad riot police that symbolised Mubarak’s security apparatus on the other, it was brutal and ephemeral. Guns were fired in the air, civilians were beaten on the ground; several soldiers appeared to drag lifeless bodies – unconscious or dead, no one could tell – towards small piles of rubbish by the roadside.

But, just as on 28 January, the turning point of the anti-Mubarak uprising when state brutality mysteriously began to conjure up courage in its victims instead of fear, those scattered by the move simply regrouped, sang at the top of their voices and marched back towards their tormentors. The middle-aged couple were among them. Outnumbered and outfought, the soldiers fled, though not before some had been captured by protesters. Fires blazed in all directions, but Liberation Square – the plaza’s name in Arabic – had once again been liberated, although how long for, no one dares predict.

And so, in a year when Egypt’s uprising against tyranny helped inspire protests around the world even as it stuttered and stumbled at home, the cycle of change has come full circle and revolution has sprung to life here once again. “People have come down from their homes to join us; they removed the head once, and now they are back again to strike down the body,” said Mai Adly, a 25-year-old reporter who was setting up for the night in Tahrir.

“Scaf’s crimes are too much,” she added. “For the first time in months I think people can see that the remnants of the old regime live on, and we have to finish the job.”