“When I tell people to prepare themselves for a dirty war, they ask me: “America against whom?” I tell them that for sure they will find someone.”
– Famous investor Marc Faber

– ‘Call It The Mother Of All Margin Calls’: Up To 50,000 MF Global Customers Face Liquidation 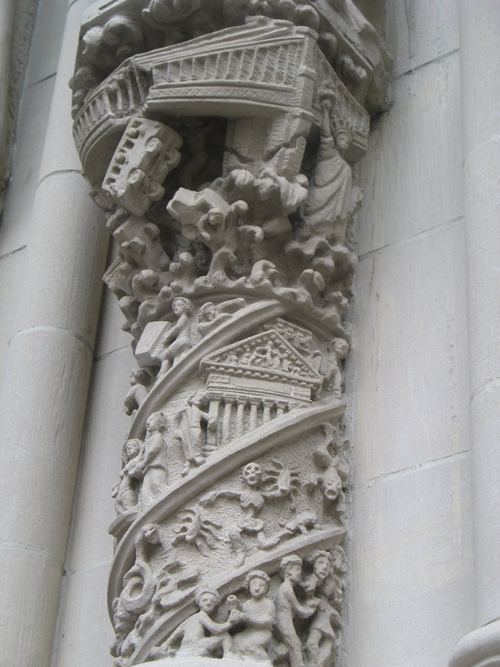 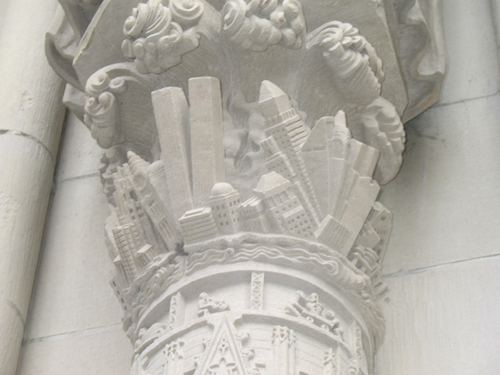 Apocalyptic New York – The scene above was done in 1997, four years before the destruction of the Twin Towers. Other recognizable skyscrapers are the Chrysler Building and the Citigroup center.

– The Cathedral of St. John the Divine depicts the destruction of New York & Wall Street as described in the Book of Revelation (Nov. 25, 2009):

“I predict that within 2 years all of this will become very obvious to everyone.”

– “The Entire System Has Been Utterly Destroyed By The MF Global Collapse” – Presenting The First MF Global Casualty (ZeroHedge, Nov. 17, 2011):

Presented without comment, merely to confirm that the market as we know it, no longer exists.

It is with regret and unflinching moral certainty that I announce that Barnhardt Capital Management has ceased operations. After six years of operating as an independent introducing brokerage, and eight years of employment as a broker before that, I found myself, this morning, for the first time since I was 20 years old, watching the futures and options markets open not as a participant, but as a mere spectator.

The reason for my decision to pull the plug was excruciatingly simple: I could no longer tell my clients that their monies and positions were safe in the futures and options markets – because they are not. And this goes not just for my clients, but for every futures and options account in the United States. The entire system has been utterly destroyed by the MF Global collapse. Given this sad reality, I could not in good conscience take one more step as a commodity broker, soliciting trades that I knew were unsafe or holding funds that I knew to be in jeopardy.

The futures markets are very highly-leveraged and thus require an exceptionally firm base upon which to function. That base was the sacrosanct segregation of customer funds from clearing firm capital, with additional emergency financial backing provided by the exchanges themselves. Up until a few weeks ago, that base existed, and had worked flawlessly. Firms came and went, with some imploding in spectacular fashion. Whenever a firm failure happened, the customer funds were intact and the exchanges would step in to backstop everything and keep customers 100% liquid – even as their clearing firm collapsed and was quickly replaced by another firm within the system.

Everything changed just a few short weeks ago. A firm, led by a crony of the Obama regime, stole all of the non-margined cash held by customers of his firm. Let’s not sugar-coat this or make this crime seem “complex” and “abstract” by drowning ourselves in six-dollar words and uber-technical jargon. Jon Corzine STOLE the customer cash at MF Global. Knowing Jon Corzine, and knowing the abject lawlessness and contempt for humanity of the Marxist Obama regime and its cronies, this is not really a surprise. What was a surprise was the reaction of the exchanges and regulators. Their reaction has been to take a bad situation and make it orders of magnitude worse. Specifically, they froze customers out of their accounts WHILE THE MARKETS CONTINUED TO TRADE, refusing to even allow them to liquidate. This is unfathomable. The risk exposure precedent that has been set is completely intolerable and has destroyed the entire industry paradigm. No informed person can continue to engage these markets, and no moral person can continue to broker or facilitate customer engagement in what is now a massive game of Russian Roulette.

I have learned over the last week that MF Global is almost certainly the mere tip of the iceberg. There is massive industry-wide exposure to European sovereign junk debt. While other firms may not be as heavily leveraged as Corzine had MFG leveraged, and it is now thought that MFG’s leverage may have been in excess of 100:1, they are still suicidally leveraged and will likely stand massive, unmeetable collateral calls in the coming days and weeks as Europe inevitably collapses. I now suspect that the reason the Chicago Mercantile Exchange did not immediately step in to backstop the MFG implosion was because they knew and know that if they backstopped MFG, they would then be expected to backstop all of the other firms in the system when the failures began to cascade – and there simply isn’t that much money in the entire system. In short, the problem is a SYSTEMIC problem, not merely isolated to one firm.

Perhaps the most ominous dynamic that I have yet heard of in regards to this mess is that of the risk of potential CLAWBACK actions. For those who do not know, “clawback” is the process by which a bankruptcy trustee is legally permitted to re-seize assets that left a bankrupt entity in the time period immediately preceding the entity’s collapse. So, using the MF Global customers as an example, any funds that were withdrawn from MFG accounts in the run-up to the collapse, either because of suspicions the customer may have had about MFG from, say, watching the company’s bond yields rise sharply, or from purely organic day-to-day withdrawls, the bankruptcy trustee COULD initiate action to “clawback” those funds. As a hedge broker, this makes my blood run cold. Generally, as the markets move in favor of a hedge position and equity builds in a client’s account, that excess equity is sent back to the customer who then uses that equity to offset cash market transactions OR to pay down a revolving line of credit. Even the possibility that a customer could be penalized and additionally raped AGAIN via a clawback action after already having their customer funds stolen is simply villainous. While there has been no open indication of clawback actions being initiated by the MF Global trustee, I have been told that it is a possibility.

And so, to the very unpleasant crux of the matter. The futures and options markets are no longer viable. It is my recommendation that ALL customers withdraw from all of the markets as soon as possible so that they have the best chance of protecting themselves and their equity. The system is no longer functioning with integrity and is suicidally risk-laden. The rule of law is non-existent, instead replaced with godless, criminal political cronyism.

Remember, derivatives contracts are NOT NECESSARY in the commodities markets. The cash commodity itself is the underlying reality and is not dependent on the futures or options markets. Many people seem to have gotten that backwards over the past decades. From Abel the animal husbandman up until the year 1964, there were no cattle futures contracts at all, and no options contracts until 1984, and yet the cash cattle markets got along just fine.

Finally, I will not, under any circumstance, consider reforming and re-opening Barnhardt Capital Management, or any other iteration of a brokerage business, until Barack Obama has been removed from office AND the government of the United States has been sufficiently reformed and repopulated so as to engender my total and complete confidence in the government, its adherence to and enforcement of the rule of law, and in its competent and just regulatory oversight of any commodities markets that may reform. So long as the government remains criminal, it would serve no purpose whatsoever to attempt to rebuild the futures industry or my firm, because in a lawless environment, the same thievery and fraud would simply happen again, and the criminals would go unpunished, sheltered by the criminal oligarchy.

To my clients, who literally TO THE MAN agreed with my assessment of the situation, and were relieved to be exiting the markets, and many whom I now suspect stayed in the markets as long as they did only out of personal loyalty to me, I can only say thank you for the honor and pleasure of serving you over these last years, with some of my clients having been with me for over twelve years. I will continue to blog at Barnhardt.biz, which will be subtly re-skinned soon, and will continue my cattle marketing consultation business. I will still be here in the office, answering my phones, with the same phone numbers. Alas, my retirement came a few years earlier than I had anticipated, but there was no possible way to continue given the inevitability of the collapse of the global financial markets, the overthrow of our government, and the resulting collapse in the rule of law.

As for me, I can only echo the words of David:

“This is the Lord’s doing; and it is wonderful in our eyes.”