– The Rumors Were True: Paulson Liquidates A Third Of His GLD Gold Share Class; Buys More Bank Of America And Capital One (ZeroHedge, Nov. 14, 2011):

Well, he may not be liquidating, and he may be telling others he has experienced barely any redemptions, but Paulson’s gold share class, represented entirely by the fund’s GLD holdings would beg to differ: as of September 30, Paulson’s total holdings of GLD were down by a third from 31.5 million shares or $4.6 billion at the end of Q2, to 20.2 million or $3.2 billion. And as is well known, GLD is not an actual investment for Paulson, but merely a representative asset class for those who opt to have their fund holdings represented in gold (the smart ones) instead of in dollars. Indicatively the only Paulson & co investors who made any money, or at least did not lose much, were those who opted for a gold share class. Either way, it is now safe to assume that at least a third of the fund has been permanently redeemed, further confirmed by the drop in the AUM from $29 billion to $20.7 billion as per the actual filing. But wait, there’s more: while Paulson was busy selling across the board, in the process liquidating all of his JPM holdings as well as his positions in Comcast (no CNBC for you), Savvis, NYSE Euronext and State Street, and following in Tepper’s footsteps in selling across the board, the former Bear trader did what all other allegedly doomed institutions do and added to, you guessed it, the biggest loser Bank of America, increasing his position by almost 4 million shares… even as the total value of his 64 million BAC stake, which closed Q3 at the same price it is today, dropped by $269 million! And that’s why he is a billionaire and you are not. At least we know who Tepper was selling to. But that’s not all: Paulson also added 1.1 million share to his CapitalOne position, bringing the total to 22.2 million shares, even as the total value of his revised position dropped by $210 million to $880 million. And so forth. Some other names in which he took brand new stakes in (picture that: he did not spend all of Q3 selling) in Motorola Mobility, Nalco, Cephalon, AMC and a bunch of irrelevant others. So to all those who are now in the same place they were in 2008: tough, but at least your fees made JP into a multi-billionaire. Congratulations. 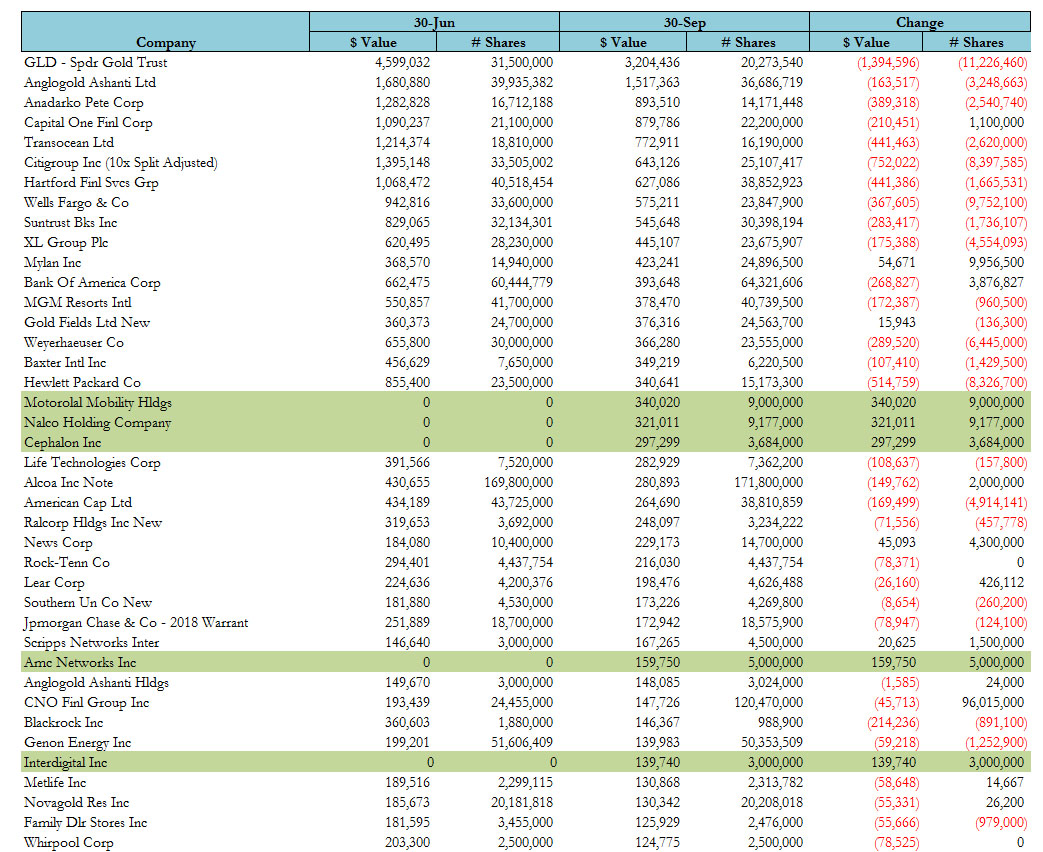 1 thought on “The Rumors Were True: John Paulson Liquidates A Third Of His GLD Gold Share Class; Buys More Bank Of America And Capital One”