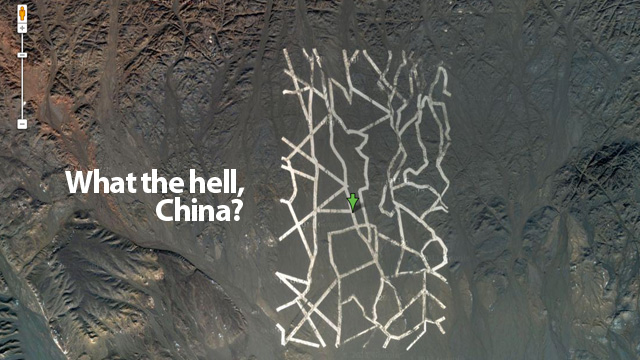 This is crazy. New photos have appeared in Google Maps showing unidentified titanic structures in the middle of the Chinese desert. The first one is an intricate network of what appears to be huge metallic stripes. Is this a military experiment?

They seem to be wide lines drawn with some white material. Or maybe the dust have been dug by machinery.

It’s located in Dunhuang, Jiuquan, Gansu, north of the Shule River, which crosses the Tibetan Plateau to the west into the Kumtag Desert. It covers an area approximately one mile long by more than 3,000 feet wide.

The tracks are perfectly executed, and they seem to be designed to be seen from orbit.

Perhaps it’s some kind of targeting or calibrating grid for Chinese spy satellites? Maybe it’s a QR code for aliens? Nobody really knows.

You can check it out yourself in Google Maps here.