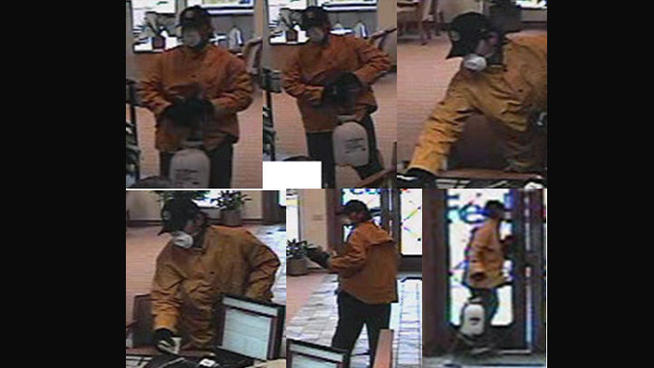 A San Diego-area teller was confronted by a bank robber carrying not only a semi-automatic pistol but also a white plastic pesticide sprayer.

The man, believed to be about 30 years old, entered a Pacific Western Bank in Rancho Santa Fe Friday around 3:30 p.m., carrying the pesticide sprayer, the pistol and demanding money.

The suspect, described as white, unshaven with wavy brown hair and approximately 5’11”, was wearing a yellow rain jacket, jeans, a black baseball cap and a dust mask covering his nose and mouth.

He entered the bank, walked up to the teller and demanded the money.

The teller complied and the suspect ran out of the bank with an undisclosed amount of cash.

The Pacific Western Bank is located at 6199 El Tordo in Rancho Santa Fe.

When a 30-something man from San Diego, Cal., recently decided to rob a local bank, he took with him an unusual, but highly-deadly, weapon. NBC San Diego reports that the robber entered a Pacific Western Bank in Rancho Santa Fe on Friday, Nov. 4, at around 3:30 pm — and in addition to a gun and dust mask, the man was armed with a large pesticide spray container.

Released surveillance footage shows the man entering the bank wearing a yellow rain jacket and a black baseball cap. And in his gloved hands is a plastic, white pesticide spray can that he presumably planned to use in the event that the teller refused to surrender the demanded cash.

You can view images captured from the footage here:
http://www.nbcsandiego.com/news/loc…

The crime appears to be the first involving the use of pesticides as an aggressive weapon. But when you really think about it, the extreme toxicity of many pesticides actually makes them a perfect weapon for robbing a bank — after all, what teller would want to risk getting blasted with chemical stews linked to causing severe neurological disorders, reproductive failure, cancer, and death?

And yet this chemical warfare is exactly what happens to countless millions of tons of conventional food crops every single day. Monsanto’s genetically-modified (GM) soy, for instance, requires regular dousing with the company’s Roundup (glyphosate) herbicide, which is linked to causing birth defects, reproductive disorders, and mortality (http://www.naturalnews.com/033772_M…).

In fact, Monsanto and the other chemical companies admittedly know that their pesticides and herbicides are deadly, but they continue to flood the environment with them. And the nation’s regulatory agencies, including the US Department of Agriculture (USDA), the US Environmental Protection Agency (EPA), and the US Food and Drug Administration (FDA), are all co-conspirators in this global genocidal activity.

Pesticides and herbicides truly are a chemical weapon, and it appears that the teller at Pacific Western Bank, who surrendered the cash, was aware of this fact. Now, when will the nation’s three-and-four letter regulatory agencies get a clue and ban this poison from the food supply?