If anyone needed the proper epitaph for the insane stupidity out of Europe, Reuters may have just provided it. In an exclusive article, Reuters stuns us with the following: “German and French officials have discussed plans for a radical overhaul of the European Union that would involve establishing a more integrated and potentially smaller euro zone, EU sources say. French President Nicolas Sarkozy gave some flavour of his thinking during an address to students in the eastern French city of Strasbourg on Tuesday, when he said a two-speed Europe — the euro zone moving ahead more rapidly than all 27 countries in the EU — was the only model for the future.” It gets much worse: “The discussions among senior policymakers in Paris, Berlin and Brussels go further, raising the possibility of one or more countries leaving the euro zone, while the remaining core pushes on towards deeper economic integration, including on tax and fiscal policy.” Not sure how to further clarify this: Europe is preparing for its own end, and the dissolution of the existing structure of the Eurozone, which likely means an end to the EU in its current format, a reshaping of the customs union, and the overhaul of the zEURq.PK in its current form. Ironically, this may end up being favorable for the Euro… and detrimental for Germany. So the question is: will Germany go for it? At this point, it probably has no choice, unless it wants a mutiny on its hands.

More from Reuters on this shocker:

A senior EU official said changing the make-up of the euro zone has been discussed on an “intellectual” level but had not moved to operational or technical discussions, while a French government source said there was no such project in the works.

Such steps are also opposed by many EU countries, whose backing would be needed for any adjustments to the bloc’s treaties, making them anything but a done deal.

“This will unravel everything our forebears have painstakingly built up and repudiate all that they stood for in the past sixty years,” one EU diplomat told Reuters. “This is not about a two-speed Europe, we already have that. This will redraw the map geopolitically and give rise to new tensions. It could truly be the end of Europe as we know it.”

Nonetheless, the Franco-German motor has generally been the driving force in steps forward for European integration.

To an extent the taboo on a country leaving the 17-member currency bloc was already broken at the G20 summit in Cannes last week, when German Chancellor Angela Merkel and Sarkozy both effectively said that Greece might have to drop out if the euro zone’s long-term stability was to be maintained.

But the latest discussions among European officials point to a more fundamental re-evaluation of the 12-year-old currency project — including which countries and what policies are needed to keep it strong and stable for the next decade and beyond — before Europe’s debt crisis manages to break it apart.

In large part the aim is to reshape the currency bloc along the lines it was originally intended; strong, economically integrated countries sharing a currency, before nations such as Greece managed to get in.

And so forth. Read the full thing here.

In other news: euroskeptics – take a bow. We truly can’t wait for Ambrose Evans Pritchards’ and Nigel Farage’s responses to this news.

As usual, the Economist summarizes it best with one cover. 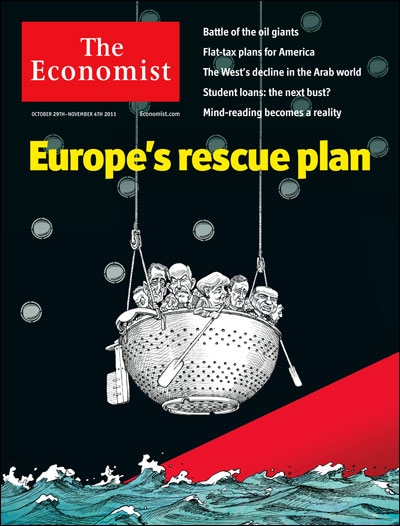