In Totsuka, Maioka park, Yokohama, which is about 250km away from Fukushima (7km away from my home), they announced that the chinese mushroom harvested in late March had 2,770 Bq/kg of cesium.

It’s already too late. These chinese mushrooms were already served to 794 volunteer park keepers who ate it.(258 of them were younger than 12 years old.)

Even from the chinese mushroom taken in mid October,they measured 955 Bq/kg of cesium. (Source)

Ignorance of people make the contamination situation even worse.

In Japanese school, students are banned to talk. No question, no thinking.

This way of discipline might have been useful to sustain the economy based on mass production, but it’s killing ourselves. Moreover, time of mass production was over decades ago.

Leaf mold was banned to sell. However, ignorant companies restarted selling it.

The picture below is taken at home center “NIkko” in Kohoku ku, Yokohama, where a citizen found 195 Bq/kg of strontium, and 10 mins by car from my home. 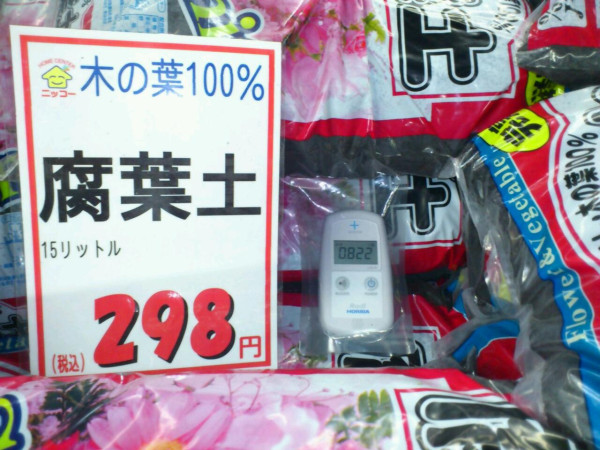 I live in Yokohama. From my observation, everyone is getting sick. They don’t take it seriously because NHK and Yomiuri newspaper do never admit it. People are too used to the spoon feeding of mass media.

Informed people collect information on the internet. An activist/actor Yamamoto Taro states, “If you just watch TV and give up collecting info on the internet, you’ll be killed by the government.”

How are they sick?

Children. They are unusually pale. have black bags under their eyes. They look tired. I sometimes see kids vomit on the street. I think he was not drunk.

Girls. Receptionists of department store, or city hall, they lost their voices. I can’t hear their voice. Some of them have their eye balls congested and look like they are popping out.

Plants. Gingko or some street trees wither before turning to be yellow or red. They are literally dying. On the other hand, sun flowers are still blooming. It’s already November. It can not happen.