“So I’m not going to die after all? Quelle bloody surprise!”

Oh dear. I really didn’t want my first blog post in a week to be yet another one about global bloody warming. Problem is, if those lying, cheating climate scientists will insist on going on lying and cheating what else can I do other than expose their lying and cheating?

The story so far: ten days ago a self-proclaimed “sceptical” climate scientist named Professor Richard Muller of Berkeley University, California, managed to grab himself some space in the Wall Street Journal (of all places) claiming that the case for global warming scepticism was over. Thanks to research from his Berkeley Earth Surface Temperatures (BEST) project, Professor Muller stated confidently, we now know that the planet has warmed by almost one degree centigrade since 1950. What’s more, he told the BBC’s Today programme, there is no sign that this global warming has slowed down.

Cue mass jubilation from a number of media outlets which, perhaps, ought to have known better – among them, the Independent, the Guardian, The Economist and Forbes magazine. To give you an idea of their self-righteous indignation at the supposed ignorance of climate change deniers, here is the Washington Post’s Eugene Robinson in full spate:

We know that the rise in temperatures over the past five decades is abrupt and very large. We know it is consistent with models developed by other climate researchers that posit greenhouse gas emissions — the burning of fossil fuels by humans — as the cause. And now we know, thanks to Muller, that those other scientists have been both careful and honorable in their work.

Nobody’s fudging the numbers. Nobody’s manipulating data to win research grants, as Perry claims, or making an undue fuss over a “naturally occurring” warm-up, as Bachmann alleges. Contrary to what Cain says, the science is real.

Problem is, Eugene, almost every word of those two paragraphs is plain wrong, and your smugness embarrassingly misplaced.

As you know, I had my doubts about Muller’s findings from the start. I thought it was at best disingenuous of him to pose as a “sceptic” when there is little evidence of him ever having been one. As for his argument that the BEST project confounds sceptics by proving global warming exists – this was never more than a straw man.

Now, though, it seems that BEST is even worse than I thought. Here is what Muller claimed on the BBC Radio 4 Today programme:

In our data, which is only on the land we see no evidence of [global warming] having slowed down.

But this simply isn’t true. Heaven forfend that a distinguished professor from Berkeley University should actually have been caught out telling a lie direct. No, clearly what has happened here is that Professor Muller has made the kind of mistake any self-respecting climate scientist could make: gone to press with some extravagant claims without having a smidgen of evidence to support them.

Here, to help the good professor out, is a chart produced by the Global Warming Policy Foundation’s David Whitehouse. It was plotted from BEST’s own figures. 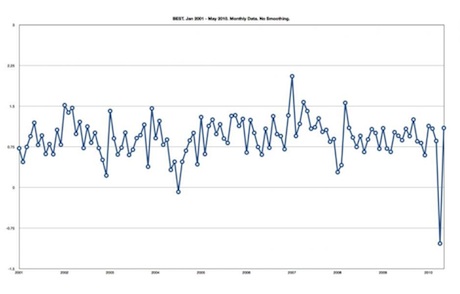 Note how the 10 year trend from 2001 to 2010 – in flat contradiction of Muller’s claims – shows no warming whatsoever.

What’s odd that BEST appears to have gone to great trouble – shades of “hide the decline”, anyone? – to disguise this inconvenient truth. Here is a graph released by BEST: 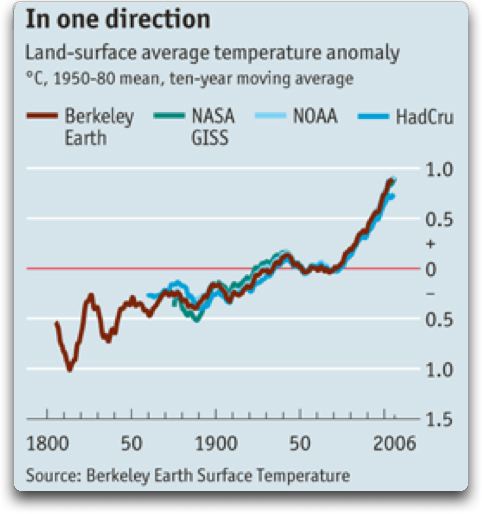 The GWPF’s David Whitehouse is not impressed:

Indeed Best seems to have worked hard to obscure it. They present data covering more almost 200 years is presented with a short x-axis and a stretched y-axis to accentuate the increase. The data is then smoothed using a ten year average which is ideally suited to removing the past five years of the past decade and mix the earlier standstill years with years when there was an increase. This is an ideal formula for suppressing the past decade’s data.

Muller’s colleague Professor Judith Curry – who besides being a BEST co-author chairs the Department of Earth and Atmospheric Sciences at America’s prestigious Georgia Institute of Technology – is even less impressed.

There is no scientific basis for saying that warming hasn’t stopped,’ she said. ‘To say that there is detracts from the credibility of the data, which is very unfortunate.’