– ‘Occupy Wall Street’: The Marines Are Coming To PROTECT The Protesters 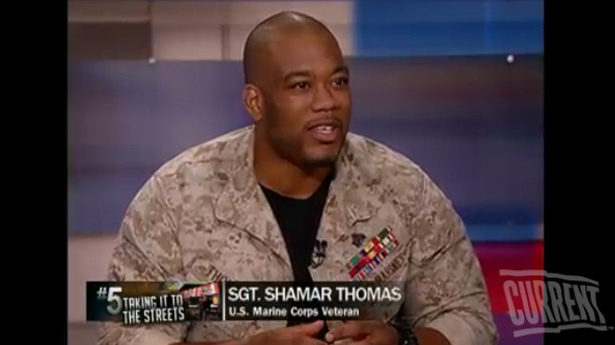 The Occupy Wall Street movement has recently expanded beyond merely occupying parks and other physical territory and is staking out a new realm of metaphorical occupations that includes both OccupyMARINES and Occupy Police.

The inspiration for OccupyMARINES came when Marine Sergeant Shamar Thomas confronted police officers who were threatening to arrest OWS protesters in Times Square on October 15, yelling, “Stop hurting these people, man! … How do you sleep at night? There is no honor in this!”

According to Business Insider, members of the new movement began by reaching out to other former marines but “have now called on veterans of other branches of the military to lend their support to help ‘talk sense’ to police and recruit them into supporting the Occupy movement.”

It remains to be seen how successful the group will be and how many veterans it will attract, but it appears to be growing rapidly and gaining support from other progressive organizations. Its webpage, which is credited as “proudly donated by The Pirate Party of New York,” announced on Sunday that the umbrella group Velvet Revolution will be acting as its fiscal sponsor to accept donations.

A second organization, Occupy Police, has already been spun off “for police in support of the 99%.” The first posting at its website, dated October 21, states, “We are in open Solidarity with Occupy Wall Street and all Occupy movements across the nation. We’re starting off Day 1 with a mass e-mail to all police departments throughout the US. We want them to know that they ARE part of the 99% and to get involved with the movement. We openly support positive communication between Police/People and we encourage you to do the same.”

Both groups have Facebook pages, located at OccupyMARINES and Occupy Police.