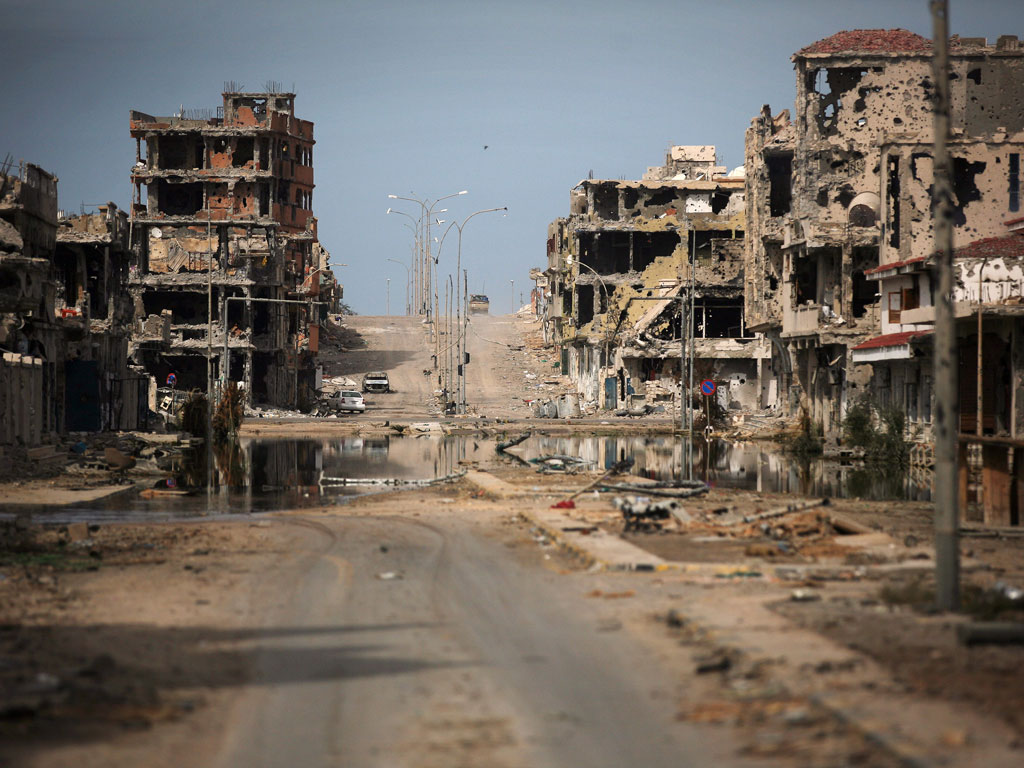 The price of liberation is plain to see on every street in the late dictator’s home town of Sirte. The place intended be the showplace of a continent is destroyed

The swaggering architectural ambitions of Colonel Muammar Gaddafi never achieved the stylistic unity reached by Hitler in Berlin, but he had his dreams. And the most cherished of all his projects was to one day see his home town of Sirte turned into the shimmering, futuristic capital of a United Africa.

Well, he lived just long enough to see it – over his shoulder for one last time as he fled on Thursday morning – transformed into a grotesque husk of a city with broken bits of what buildings still stood sticking out from the ground like the shattered remains of the teeth of a mugging victim. It looks today like Ypres in 1915, or Grozny in 1995 after the Russian Army had finished with it.

The Lonely Planet guide once described Sirte as a “city without soul”. Now it’s almost without an intact building. Nearly every house has been pulverised by a rocket or mortar, burned out or riddled with bullets. Water floods the streets and the infrastructure of a city upon which the Libyan leader lavished many millions has simply ceased to exist. The devastation is comparable to that suffered by Misrata during the war. But the bombardment of Sirte and the burning of homes that belong to Gaddafi family members and supporters has raised suspicions that some fighters loyal to the National Transitional Council (NTC) brought a particular ferocity to their task.

A luxurious home belonging to Aisha, Gaddafi’s daughter, was set on fire. The walls were destroyed after they were sprayed by bullets. Abu Anas, a Sirte resident who returned to his house to pick up belongings and found that it had been looted, said: “What’s happening in Sirte is revenge, not liberation. When someone comes and takes your personal car and destroys your home, this is not liberation.”

The showpiece of Gaddafi’s future continental capital was the Ouagadougou conference centre, a vast marbled hall. Once, heads of state were flattered here; today, it resembles an architectural model that has been stamped on and then burned. Its roof has collapsed under the artillery onslaught, and all its oversized windows have been punched out by shelling.

Residents returning to, or who stoically remained in, Sirte accuse Libyan interim government fighters of demolishing and looting homes, shops and public buildings in Gaddafi’s home town to take revenge for its support of the fugitive leader. A Sirte woman who did not want to be named told Reuters last week: “We didn’t resist in this neighbourhood, so why did they destroy our homes?”

Inspecting the damage to her house, she said that Sirte would never go back to how it used to be. “There is no security here any more,” she said. Doors were broken, clothes strewn across the floor and furniture had been knocked over. The smoke lingering over the city from the continued fighting could be seen through a hole in the wall.

Several residents said that looting had made them bitter toward the revolution that ended Gaddafi’s 42-year rule. Some saw it as a way to even the score for their living relatively comfortably under the ousted leader. “Are you coming to liberate the city or to steal from it?” asked Ahmed, another resident, inside his house.

The treatment that Sirte received, whether justified by pure military objectives or not, will be seen by some of its residents as having a tribal dimension. It was no surprise yesterday when the former leader’s tribe, the Qadhadhfa (or Gaddafiya), declared their support for Saif al-Islam Gaddafi. He is the only member of the family still on the run, and, if he escapes to Niger, as he is supposed to be trying to do, he could be a possible focus for an insurgency. Tribe still matters in Libya, and opposition to Gaddafi was the unifying glue which helped hold the former rebels together. With his death, older loyalties, and rivalries, may resurface.

The other city to suffer extreme destruction is the one where Gaddafi’s body has lain for three days. Much of Misrata was destroyed by tank fire and constant shelling by Gaddafi’s forces. Its water supplies were deliberately cut and food began to run out, but it resisted the onslaught. Blooded by that battle, its fighters then played a major role in the fall of Tripoli.

Gaddafi’s body is not the only “trophy” for the city’s residents. Two other prizes, which were among the fallen leader’s most eye-catching possessions, were also driven to Misrata after its fighters overran his Tripoli compound. The most visible is Gaddafi’s symbol of his contempt for the West; a giant golden statue of a hand crushing a US warplane. It now stands, sprayed with revolutionary slogans and painted with Libya’s new flag, on Misrata’s Tripoli Street, which was razed during the bombardment.

“I think there are some people in Tripoli who might be wanting that back,” one Western diplomat said as he looked at the statue. The diplomat was alluding to the fact that the brigades from Misrata did not consult the leaders of the interim government, the NTC, before looting Gaddafi’s Tripoli compound or before carting his battered body home with them from Sirte.

Behind the warplane statue is a museum dedicated to Misratans who died during the war and a collection of the weapons they used to defend their city. To the statue’s right, precariously perched on the footpath outside the museum, is the other big Tripoli trophy; a giant statue of an eagle looted from the roof of Gaddafi’s home inside his Bab al-Aziziya headquarters and command centre.

Throughout Libya, portraits and posters of Gaddafi have been torn down, and symbols of his rule not already removed will today, on Liberation Day, be draped in the tricoloured flag of the former rebels.

In Tripoli, there are, and in the future will be, more prosaic monuments to his defeat. There are plans to turn his compound into a park, and citizens have already colonised the courtyard in front his home – from where he often delivered his rambling speeches – for a humdrum purpose. It is now a weekly pet market.