Here’s another stat that the Occupy Wall Streeters can hoist on their placards: The world’s millionaires and billionaires now control 38.5% of the world’s wealth.

According to the latest Global Wealth Report from Credit Suisse, the 29.7 million people in the world with household net worths of $1 million (representing less than 1% of the world’s population) control about $89 trillion of the world’s wealth.  That’s up from a share of 35.6% in 2010, and their wealth increased by about $20 trillion, according Credit Suisse.

The wealth of the millionaires grew 29% — about twice as fast as the wealth in the world as a whole, which now has $231 trillion in wealth.

The U.S. has been the largest wealth generator over the past 18 months, according to the report, adding $4.6 trillion to global wealth. China ranked second with $4 trillion, followed by Japan ($3.8 trillion), Brazil ($1.87 trillion) and Australia ($1.85 trillion). 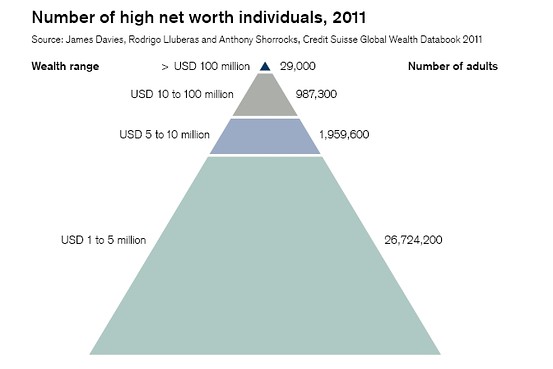