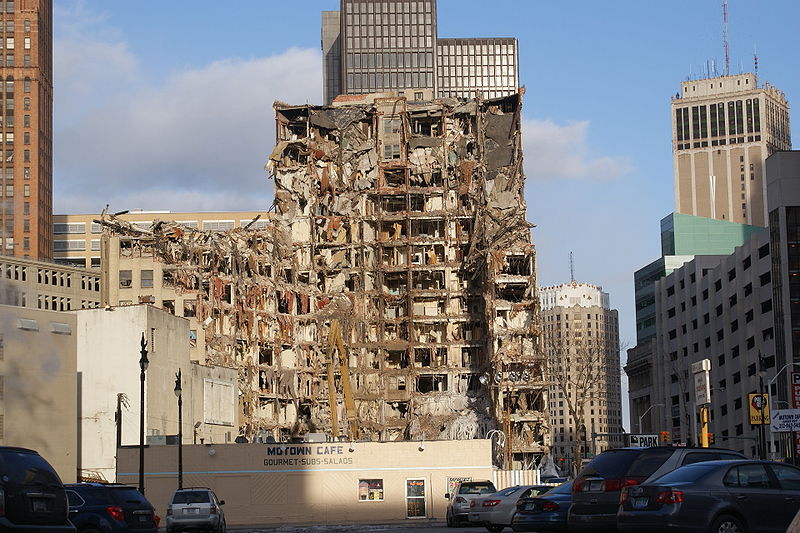 If you want to know what the early stages of an economic collapse look like, just walk around some of the downtown areas of our major cities.  Today, nearly all large U.S. cities are either flat broke or they are on the way to being flat broke.  Yes, New York City and Washington D.C. (and a few others) are still doing fairly well, but for most U.S. cities economic reality is catching up with them very quickly.  Right now, there are a number of major cities that are so broke that they cannot keep the street lights operating.  Down in St. Louis, parents in some areas are carrying golf clubs with them as they walk their kids to school in order to fend off roving packs of wild dogs.  In other major U.S. cities, open-air drug markets conduct business without fear.  All over the United States, cities that used to be clean and prosperous and full of hope are now being transformed into post-industrial wastelands.  We are certainly not in “Mad Max” territory yet, but it doesn’t take too much imagination to see where all of this is headed.

I have previously written about how Detroit is literally coming apart at the seams.  Well, now in many areas of the city they can’t even keep the street lights on anymore.  There simply is not enough money, and even if there was, thieves are stealing the copper wiring out of the street lights faster than the city can repair them.

At this point, there are some neighborhoods in Detroit where up to 50 percent of the street lights are not functioning.

The following is from a recent article in The Detroit News about this crisis….

The war to keep the lights on in Detroit is a serious one. Thieves, antiquated equipment and a lack of funding have made it impossible for city officials to catch up to the problem.

City officials estimate 15-20 percent of the 88,000 lights in the Motor City are not working, and they acknowledge that figure could be as high as 50 percent in some neighborhoods.

But it is not just Detroit that is having a major problem.  Over in Highland Park, Michigan the majority of the street lights have been repossessed because the city was not keeping up with the electricity bill.

So what are residents of Highland Park supposed to do?

Are they supposed to lock themselves in their own homes at night?

Down in St. Louis they are having a different problem.  In some of the worst areas of the city, roving packs of wild dogs are a serious threat to children that are walking to school.

A recent report by the local CBS affiliate in St. Louis described the situation this way….

…Lewis Reed is sounding the alarm. “I’ve witnessed packs of dogs, 10 and 15 dogs running together, and I’ve seen all these dogs I’m talking about they don’t have collars, they don’t have tags, these are truly wild dogs,” he said.

Reed says stray dogs are terrorizing the north side. “It’s obscene that parents have to walk their kids to school, in some parts of the city, with a golf club to fend off wild dogs.”

Can you imagine that?

They say that they are going to try to put more money into animal control efforts if they can find it.  But like most major U.S. cities, St. Louis is a financial basket case.

Moving west a bit, Las Vegas is a different kind of a problem.  It was once a mighty symbol of American luxury and decadence, but now it is a microcosm of everything that has gone wrong with our economy.

The following description of the decline of Las Vegas comes from a recent article in The Telegraph….

But Las Vegas’s days as a boom town are long gone. At 14 percent, unemployment is the highest in America (the national average is 9.1 per cent). House prices have fallen 58.1 per cent since their 2006 high – the biggest losses of anywhere in America, while according to the website RealtyTrac, which specialises in foreclosed properties, Las Vegas is the nation’s foreclosure capital. Some 70 per cent of homes in Las Vegas are thought to be ‘under water’, or in negative equity, meaning their value is worth less than the amount owed on the mortgage, while foreclosure notices have been served on one in 16 properties. A survey last year by the local Las Vegas Review-Journal and Channel 8 News Now found that 34 per cent of locals would leave Las Vegas if they could find a job elsewhere, or if they weren’t underwater on their home loan.

Last year, I wrote a piece entitled “The Death of Las Vegas“.  Since then, things have gotten even worse for the city in many ways.

Today, there are hundreds of people living in the tunnels underneath the streets of Las Vegas.  You can see CNN video of some of these people right here.

But at least the “tunnel people” have a “roof” over their heads.

Over in “Lost Angeles”, homelessness is absolutely exploding and there are thousands of people living in the streets.

The following is from a recent article by Nick Allen….

In Skid Row, a grimy pocket of downtown Los Angeles, the prostrate forms of homeless people lie strewn across the pavements.

The lucky ones have tents for shelter but others make do with a sliver of cardboard for a bed and a supermarket trolley to carry their rags.

At the last police count 1,662 people live on these streets, twice as many as a year ago.

And now amid the drug addicts and the drunks there are families who not so long ago had homes and ordinary suburban lives.

Wait, wasn’t the economy supposed to be getting better?

So why has the number of people living on Skid Row doubled over the past year?

Unemployment is rampant, crime is seemingly everywhere and the gangs appear to be getting bolder by the day.  For example, 21 machine guns were recently stolen right out of an LAPD training facility.

But there are cities in California that are in even worse shape than Los Angeles is.  If you go east of Los Angeles about 100 miles, you will come to the city of San Bernardino.  34.6 percent of the residents of San Bernardino are currently living below the poverty line.  Among major U.S. cities, only Detroit has a worse poverty rate.

Heading back to the east coast, the city of Camden, New Jersey is representative of the post-industrial hellholes that you will find all over the mid-Atlantic region and up into New England.

In an extraordinary article entitled “City of Ruins“, Chris Hedges did an amazing job of documenting how bad things have gotten in Camden.  Today it is estimated that the actual rate of unemployment in Camden is somewhere around 30 or 40 percent.  For most young people in Camden, there are very few legitimate opportunities for a better life, so many of them have resorted to selling drugs or selling their bodies in a desperate attempt to survive.

The following is a brief excerpt from “City of Ruins”….

There are perhaps a hundred open-air drug markets, most run by gangs like the Bloods, the Latin Kings, Los Nietos and MS-13. Knots of young men in black leather jackets and baggy sweatshirts sell weed and crack to clients, many of whom drive in from the suburbs. The drug trade is one of the city’s few thriving businesses. A weapon, police say, is never more than a few feet away, usually stashed behind a trash can, in the grass or on a porch.

The era of “American exceptionalism” is over.  We have rejected the things that made us great.  We have forsaken the truth and now we are paying the price.

At this point, we are rapidly becoming a joke to the rest of the world.

You know that things are bad when headlines such as this start showing up in major international publications: “America Must Manage Its Decline“.

Is that what we are going to tell our kids and our grandkids?

Are we going to tell them that we must “manage” our decline?

Most Americans also realize that something is fundamentally wrong.  According to a recent Time Magazine poll, 81 percent of the American people believe that the country is on the wrong track.

So why don’t our cities just spend more money and fix all of these problems?

Well, it is because most of them are drowning in a sea of red ink.  Instead of spending more money, most of them are desperately searching for more places to cut.  If you can believe it, 72 percent of all U.S. cities are laying workers off this year.

The federal government has been pumping massive amounts of money into state and local governments in recent years, but that can’t last much longer.  As I wrote about yesterday, the federal government is in debt up to its eyeballs.  In fact, the national debt has become so large that it threatens to collapse our entire financial system.

Sadly, the cold, hard truth is that we are now going to pay the price for decades of financial foolishness.

We thought that it would be our children and our grandchildren that would pay the price for our financial recklessness, but the reality is that we are going to pay the price too.

America is in a serious state of decline and things are going to get a lot worse in the years to come.

Take advantage of the relative prosperity that we are enjoying now to prepare for the lean years which are ahead.

1 thought on “The New Reality For US Cities: No Money For Street Lights, Roving Packs Of Wild Dogs And Open-Air Drug Markets”