Occupy Wall Street protests reach Boston, LA, St Louis and Kansas City, and are planned in cities across US and abroad 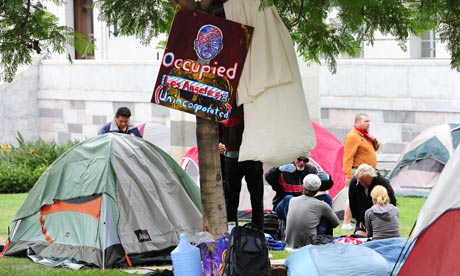 Wall street protests have inspired demonstrations and planned actions across the US, such as this one in Los Angeles. Photograph:Frederic J Brown/AFP/Getty Images

It began as the brainchild of activists across the border in Canada when an anti-consumerism magazine put out a call in July for supporters to occupy Wall Street.

Now, three weeks after a few hundred people heeded that initial call and rolled out their sleeping bags in a park in New York’s financial district, they are being joined by supporters in cities across the US and beyond.

Armed with Twitter, Facebook and shared Googledocs, protesters against corporate greed, unemployment and the political corruption that they say Wall Street represents have taken to the streets in Boston, Los Angeles, St Louis and Kansas City.

The core group, Occupy Wall Street (OWS), claims people will take part in demonstrations in as many as 147 US cities this month, while the website occupytogether.org lists 47 US states as being involved. Around the world, protests in Canada, the UK, Germany and Sweden are also planned, they say.

The speed of the leaderless movement’s growth has taken many by surprise. Occupytogether.org, one of several sites associated with the protest, has had to be rebuilt to accommodate the traffic.

OWS media spokesman Patrick Bruner said: “We have on our board right now 147 US cities. I don’t know whether they are occupied or they are planning on being occupied. My guess would be over 30 cities are occupied.”

The original call by the Canadian magazine Adbusters to occupy Wall Street drew hundreds of protesters on 17 September and 2,000 attended a march the following Saturday. But the movement, which organisers say has its roots in the Arab spring and in Madrid’s Puerta del Sol protests, has been galvanised by recent media attention.

Last week, the Guardian reported that a NYPD police officer had been filmed spraying four women protesters with pepper spray. On Saturday, a peaceful march on Brooklyn bridge intended as a call to the other four boroughs of New York to join in resulted in 700 arrests. Some protesters claim the police trapped them.

There are now two investigations, including an internal police inquiry, into the pepper spraying incident.

Bruner said the protest had snowballed in the last few days: “The American people have realised that the American dream has been assassinated and the murderer is still on the loose.”

A message on the occupytogether site apologises for the site rebuild and directs readers to update links. It reads: “Wow, the groups organising and occupations popping up across the country is growing exponentially by the day. So much so that, in order to have proper navigation and organisation on the site, we had to begin categorising these pages by state. Because of this, every occupation’s permalink has been changed.”

Thornin Caristo, of OWS, said the movement had taken hold because it had tapped into anger at inequality, unemployment and corporate greed. He predicted it would continue to grow.

Caristo said: “It was always going to be a hit or miss situation but it’s a hit and I don’t think it will be reversing. So much of the population has no hope and those people are desperate.”

Other websites publicising the protests have also become hugely popular. One, named wearethe99percent, in reference to the statistic that 1% of the US population owns a third of the wealth, posts pictures of people holding handwritten messages daily.

One said: “Last year, my 60-year-old mother was evicted. This year I graduated with my master’s. I am unemployed with over $120,000 in student loans. I no longer believe the American Dream is for me because … We are the 99 per cent.”

Another person holds up a sign which reads: “When you’re young, you’re told you can be anything, I’m sick of being fed lies. I graduated with a BA in 2009 and I’ve been searching for a job ever since. My generation is lost, depressed, in debt, struggling. We are taking unpaid internships and temporary contracts with no health insurance in desperation. We will forever be living at our parent’s house.”

Unions have have also expressed solidarity with the protests.

On Monday, the Transit Workers Union said it had applied for an injunction to stop the NYPD from forcing bus drivers to carry arrested OWS demonstrators.

On Tuesday the 700,000-strong Communication Workers of America endorsed OWS, describing it as an “appropriate expression of anger for all Americans, but especially for those who have been left behind by Wall Street”.

In a statement, the group said: “We support the activists’ non-violent efforts to seek a more equitable and democratic society based on citizenship, not corporate greed.

“The Occupy Wall Street demonstrations are spreading throughout the country. We will support them and encourage all CWA Locals to participate in the growth of this protest movement.”

Today, the protesters will join a number of unions and community organisations, including the CWA, the TWU and the United Federation of Teachers in a march on City Hall.

1 thought on “Wall Street Protest Movement Spreads To Cities Across US, Canada And Europe”