– ‘Welcome to the Recovery’: Why Another 11 Million Mortgages Will Go Bad 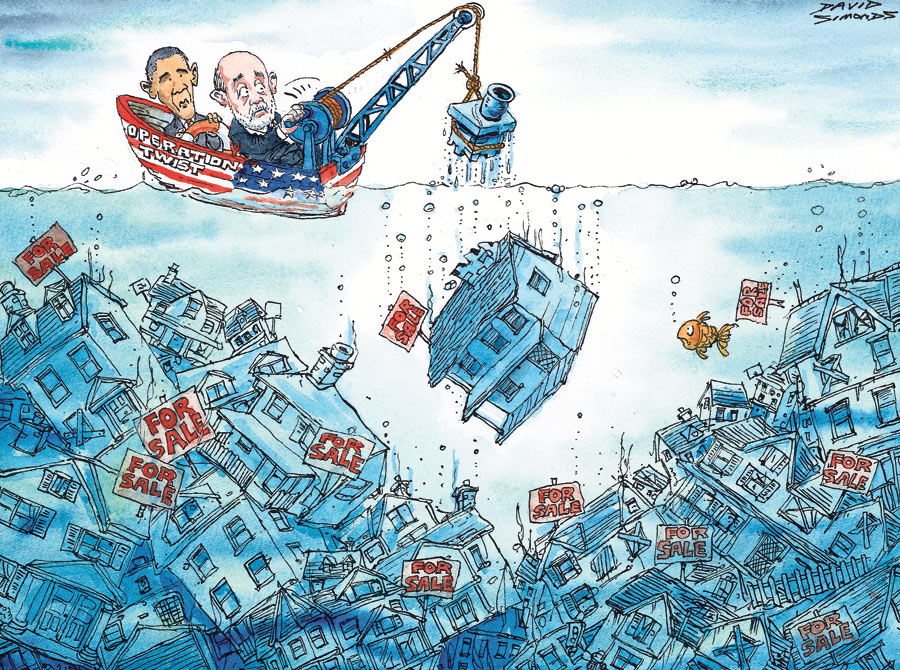 – If it doesn’t do something about its underwater mortgages, America could sink without trace (Guardian, Oct. 2 2011):

Stimulating the economy is all very well in the short term. But the national legacy of unpayable property debt will weigh the US down for years

It’s now more than six years since Alan Greenspan, in the days when he was still known as the “maestro” of the world economy, conceded that there might be a little “froth”, perhaps even a few “local bubbles”, in the American housing market.

Subsequent events showed that he was a master of understatement, but not of much else. The sub-prime frenzy, which had seen cut-price loans to borrowers with dodgy credit histories squeezed through the slice-and-dice operations of Wall Street banks and sold on as top-quality investments, had helped to inflate an almighty bubble right across the US.

When home prices started to decline, it triggered a worldwide credit crunch and what became known as the Great Recession; but it also took a painful toll on American society.

House prices have bounced back marginally from the depths of 2009, but they remain more than 30% below their peak. In some cities, where the boom was at its wildest, prices have fallen even further. In Las Vegas, for example, homes bought at the height of the sub-prime frenzy are now worth 59% less than their purchase price. So it’s not surprising that more than one in five mortgage-holders are in negative equity, and many thousands of Americans have lost their homes.

Even the merest glimpses of Washington, caught between the IMF’s glass-and-steel headquarters and the brownstones of Georgetown on a week-long visit last month, revealed a much larger than usual number of rough sleepers and vagrants huddled in doorways or begging on street corners – just the most visible manifestation of the ongoing social and economic crisis.

And while the world’s eyes are on Athens, where state employees are facing yet another pay cut to satisfy the demands of the international bond markets, life on Main Street, USA is as tough as it has been in many years. The stagnant housing market continues to erode families’ wealth and saddle them with ever more unpayable debts.

President Obama’s ambitious jobs package, announced last month, is a valiant attempt to tackle the recalcitrant problem of unemployment, which remains above 9%. But even if he manages to get the plan past a ferociously partisan Congress, where his proposal to increase the marginal tax rate for millionaires has been described as “class war”, it’s unlikely to deliver a permanent solution to the economic malaise unless the housing market can be stabilised and the legacy of mortgage debt resolved.

Ben Bernanke at the Federal Reserve is trying to do his bit: Operation Twist, his latest wheeze, is directly aimed at driving down long-term interest rates and making mortgages more affordable, while the Fed is also continuing to invest in mortgage-backed securities to stop the credit markets drying up.

But the Fed’s powers are limited, especially with conspiracy-minded Republicans breathing down Bernanke’s neck. Just as in poor old Greece, the underlying problem in the US housing market is that the debts run up in the years of plenty will be a millstone around the neck of the economy for many years – and may ultimately be impossible to repay.

Even the IMF, hardly known as a champion of aggressive government intervention, said in its latest world economic outlook that Washington should try to find ways of writing down the value of some of these overblown loans.

“The large number of ‘underwater’ mortgages poses a risk for a downward spiral of falling house prices and distress sales that further undermines consumption and labour mobility,” it warned, calling for courts to be allowed to write off a proportion of mortgages where borrowers have got themselves in trouble; for the taxpayer-backed mortgage guarantors Fannie Mae and Freddie Mac to encourage writedowns; and for an extension of state-level programmes to support troubled homeowners.

Each of these would be controversial, and they carry a risk of “moral hazard”: the fear that reckless borrowers will in future feel they can take on eye-watering loans and assume the state will bail them out. But the alternative may be years of stagnation. Just as in Europe, pumping up short-term demand is fine, but tackling the legacy of a decade-long credit glut must be the starting point for stabilising, and ultimately rebuilding, the American economy.

After the worst quarter for equities since before the credit crunch, and with shell-shocked banks still rebuilding their balance sheets, it’s hardly surprising companies are tapping other sources of funding.

The latest fad is for persuading members of the public to sign up for a bond issue: National Grid announced on Friday that it had managed to place a £260m inflation-linked bond with investors, following the trail blazed by John Lewis and Hotel Chocolat, which tempts its creditors with chocolates instead of a coupon.

The appeal for investors isn’t hard to fathom either. After the wrenching sell-off in financial markets since the summer, equity yields are higher than bond yields. This usually marks a good point to get back into the market, but with Greece (still) on the brink of bankruptcy, the US economy sliding towards recession and eurocrats squabbling about who’s in charge, it would be a bold investor who decided to ride back into the equity markets right now.

There are downsides to corporate bonds, of course: as investors in Greek sovereign bonds are discovering, there’s always at least some risk of default. In the unimaginable event that John Lewis went bust, there would be no Frau Merkel lurking in the background to write a cheque – though it’s hard to imagine National Grid being allowed to go down: no government wants to see the lights go off.

For firms fed up with negotiating with the City or locking horns with their bankers, a public bond issue can be a relatively low-cost way of raising money directly.

It could also be a way of building up a valuable sense of loyalty, as high-street stalwarts once did by selling shares to an army of loyal Middle England investors who turned up once a year for tea and sandwiches at the annual meeting. As Hotel Chocolat’s creditors munch on their regular box of tasty treats, or John Lewis bondholders spend their gift vouchers, they may well feel they have more of a stake in the company than many shareholders who hold their stake through an insurance policy or a pension fund.