Japan’s DoCoMo is set to introduce a smartphone jacket with radiation detection sensor in the “CEATEC Japan 2011″, an annual high-tech trade show in Japan, at Makuhari Messe in Chiba which will start on October 4, according to Sankei Biz (9/26/2011).

(Just when the government has launched a sort of smear campaign on small, personal survey meters as “inaccurate”…)

Apple’s iPhone and iPod already have an attachment and an application that detects radiation.

According to the Sankei Biz article, DoCoMo’s radiation sensor jacket, that will be attached to the back of a smartphone, will allow not only the radiation detection but also data collection over time and sharing, and mapping.

DoCoMo’s press release says it will detect gamma radiation. It can detect radiation from 0.01 microsievert/hour to 100 millisieverts/hour, according to Asahi Shinbun. No information about the pricing.

In the photo, the plastic case next to the phone contains radium pellets. 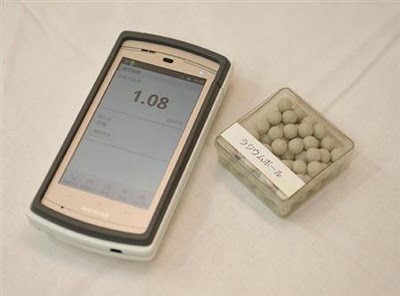