“I put the ever-resourceful Nick Rizzo on the task, but he came up with little more: the market in physical gold is tiny, and largely comprised of nutcases.”

Yeah, right only nutcases (= individuals still using their brain, shaking their head in disbelief at the unlimited stupidity of society) invest in physical gold and silver!

And please take a close look at all those billionaires and world famous investors that are heavily invested in physical gold and silver.

The Rothschilds who own Reuters are heavily invested in physical gold and silver. (Obviously nutcases, all of them!)

It is difficult for the elitists to destroy the middle class, if the people hold physical gold and silver. 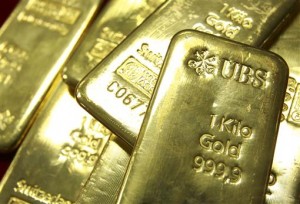 Ever since the news broke last week that Hugo Chávez wanted to transport 211 tons of physical gold from Europe to Caracas, I’ve been wondering how on earth he possibly intends to do such a thing.

There are 99 tons already being held at the Bank of England; according to the FT, the plan is to transfer other gold to the Bank of England from custodians such as Barclays, HSBC, and Standard Chartered; then, once it’s all in one place, um, well, nobody has a clue what might happen. Here’s the best guess from the FT:

Venezuela would need to transport the gold in several trips, traders said, since the high value of gold means it would be impossible to insure a single aircraft carrying 211 tonnes. It could take about 40 shipments to move the gold back to Caracas, traders estimated.

“It’s going to be quite a task. Logistically, I’m not sure if the central bank realises the magnitude of the task ahead of them,” said one senior gold banker.

I put the ever-resourceful Nick Rizzo on the task, but he came up with little more: the market in physical gold is tiny, and largely comprised of nutcases. The last (and only) known case of this kind of quantity of gold being transported across state lines took place almost exactly 75 years ago, in 1936, when the government of Spain removed 560 tons of gold from Madrid to Moscow as the armies of Francisco Franco approached. Most of the gold was exchanged for Russian weaponry, with the Soviet Union keeping 2.1% of the funds in the form of commissions and brokerage, and an additional 1.2% in the form of transport, deposit, melting, and refining expenses.

It’s not much of a precedent, but it’s the only precedent we’ve got; my gut feeling is that Venezuela would be do well to get away with paying 3.3% of the total value of the gold in total expenses. Given that the gold is worth some $12.3 billion, the cost of Chávez’s gesture politics might reasonably be put at $400 million or so.

It seems to me that Chávez has four main choices here. He can go the FT’s route, and just fly the gold to Caracas while insuring each shipment for its market value. He can go the Spanish route, and try to transport the gold himself, perhaps making use of the Venezuelan navy. He could attempt the mother of all repo transactions. Or he could get clever.

In the first instance, the main cost would be paid by Venezuela to a big insurance company. I have no idea how many insurers there are in the world who would be willing to take on this job, but it can’t be very many, and it might well be zero. If Venezuela wanted just one five-ton shipment flown to Caracas in conditions of great secrecy, that would be one thing. But Chávez’s intentions have been well telegraphed at this point, making secrecy all but impossible. And even if the insurer got the first shipment through intact, there would be another, and another, and another — each one surely the target of criminally-inclined elements both inside and outside the Venezuelan government. Gold is the perfect heist: anonymous, untraceable, hugely valuable. Successfully intercepting just one of the shipments would yield a haul of more than $300 million, making it one of the greatest robberies of all time. And you’d have 39 chances to repeat the feat.

Would any insurer voluntarily hang a “come get me” sign around its neck like that? They’d have to be very well paid to do so. So maybe Chávez intends to take matters into his own hands, and just sail the booty back to Venezuela on one of his own naval ships. Again, the theft risk is obvious — seamen can be greedy too — and this time there would be no insurance. Chávez is pretty crazy, but I don’t think he’d risk $12 billion that way.

Which leaves one final alternative. Gold is fungible, and people are actually willing to pay a premium to buy gold which is sitting in the Bank of England’s ultra-secure vaults. So why bother transporting that gold at all? Venezuela could enter into an intercontinental repo transaction, where it sells its gold in the Bank of England to some counterparty, and then promises to buy it all back at a modest discount, on condition that it’s physically delivered to the Venezuelan central bank in Caracas. It would then be up to the counterparty to work out how to get 211 tons of gold to Caracas by a certain date. That gold could be sourced anywhere in the world, and transported in any conceivable manner — being much less predictable and transparent, those shipments would also be much harder to hijack.

How much of a discount would a counterparty require to enter into this kind of transaction? Much more than 3.3%, is my guess. And again, it’s not entirely clear who would even be willing to entertain the idea. Glencore, perhaps?

But here’s one last idea: why doesn’t Chávez crowdsource the problem? He could simply open a gold window at the Banco Central de Venezuela, where anybody at all could deliver standard gold bars. In return, the central bank would transfer to that person an equal number of gold bars in the custody of the Bank of England, plus a modest bounty of say 2% — that’s over $15,000 per 400-ounce bar, at current rates.

It would take a little while, but eventually the gold would start trickling in: if you’re willing to pay a constant premium of 2% over the market price for a good, you can be sure that the good in question will ultimately find its way to your door. And the 2% cost of acquiring all that gold would surely be much lower than the cost of insuring and shipping it from England. It would be an elegant market-based solution to an artificial and ideologically-driven problem; I daresay Chávez might even chuckle at the irony of it. He’d just need to watch out for a rise in Andean banditry, as thieves tried to steal the bars on their disparate journeys into Venezuela.