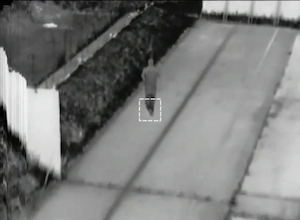 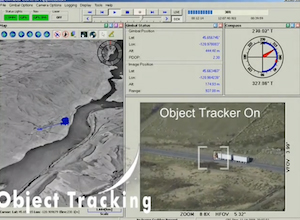 Not limited to our borders, ShadowHawk will soon be swooping down on bad guys off the shores of Africa. Vanguard Defense justwon a multi-million dollar contract for “several” ShadowHawks to patrol the east African coast against pirates. Hired by a “global leader in the oil and gas exploration and production industry,” the initial plan is to use the copter drones strictly for surveillance. But I wouldn’t be surprised if the local authorities get involved at some point and bring the heavy stuff. Pirates might respond better when looking down the nose of a 40mm grenade launcher.

ShadowHawk is not nearly as agile as the acrobatic quad-copter from UPenn’s GRASP Lab. But it’s definitely more agile than a perpetrator fleeing on foot. All of the cameras can be used to track ground targets with amazing effectiveness. The following video demonstrates the ability of the CCD (1:40) and infrared cameras’ (2:00) ability to track vehicles and humans fleeing on foot. You can run, but ShadowHawk is going to stick to you like flies on…shady characters.

The ShadowHawk comes in four different flavors with different options for outfitting. Both turbine or piston engines are available and guidance systems include laser pointers, range finders, illuminators, CCD TV optics and a FLIR infrared camera. Take off, flying and landing can be fully automated or pilot assist, semi-autonomous. The military and law enforcement can opt to add an XREP taser, 37mm or 40mm grenade launchers or a meaty single shot or multiple shot 12 gauge shotgun. The final variety is for military use only and they don’t tell us what sorts of ballistics toys they get to pick from.
ShadowHawk can travel over land or sea for up to 3.5 hours in its hunt for perpetrators. Its maximum range is 35 miles with a top speed of 70 mph. The XREP taser sits on ShadowHawk’s nose with four barbed electrodes that can be shot to a distance of 100 feet. After hitting the target they deliver ‘neuromuscular incapacitation’ for a hellish 20 seconds. The cameras are on continuously, which means, when they are inevitably leaked, we’re due for some of the craziest videos-gone-viral ever to hit YouTube.

But you shouldn’t be worried about your neighbors getting their hands on a ShadowHawk. Hobbyists can have drones as long as they keep them from flying higher than 400 feet. And, of course, they won’t be armed with tasers or grenade launchers. But after that the FAA guidelines are pretty loose concerning ShadowHawks or any such “unmanned aircraft.” The FAA “encourages good judgment on the part of operators so that persons on the ground or other aircraft in flight will not be endangered.”

In its first flights the ShadowHawk’s job will probably be strictly surveillance. But as law enforcement such as Montgomery County’s gains experience and field tests the drone, perhaps they’ll decide when using that taser might be the best option. As more drones like ShadowHawk take to the sky over our cities and that high-pitched whine draws terribly closer, probably best to just lay down, hands on your head, feet spread apart.

A nice, cute copter for hobbyists – if your hobby happens to be going after bad guys with tasers and grenade launchers