Since 81% of all stocks are owned by the top 10%, a stock market crash has little effect on the bottom 90% of Americans.

It is assumed without question that the stock market is some quasi-sacrosanct barometer of the U.S. economy. But who even cares if the market crashes? Only the top 10% who own it. Yes, millions of (generally government) workers have an indirect stake in stocks and bonds via their state/union pension funds, but it’s still informative to look at the distribution of who actually has a stake in the market’s rise and fall.

This data is from pre-recession 2007, so I suspect ownership has become even more skewed to the top 5% as those below liquidated stocks to pay the bills as household income and housing equity plummeted. 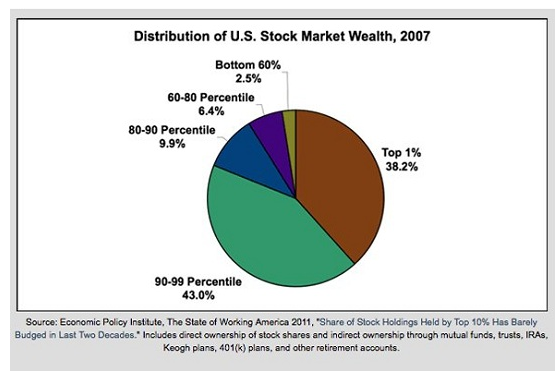 A severe decline in the “wealth effect” would probably crimp the top 10% tranche’s carefree spending, which accounts for some 40% of the nation’s consumer spending. If the market crashes, high-end retailers and restaurants would likely see sales fall significantly. While there would be consequences, we should be careful not to overstate the stock market’s role in the nation’s Main Street economy.

And what are the chances of a real crash? For insight, we turn to the The Chart Store‘s chart overlaying the current rally and collapse with the Dow circa 1907. The similarity is rather uncanny: 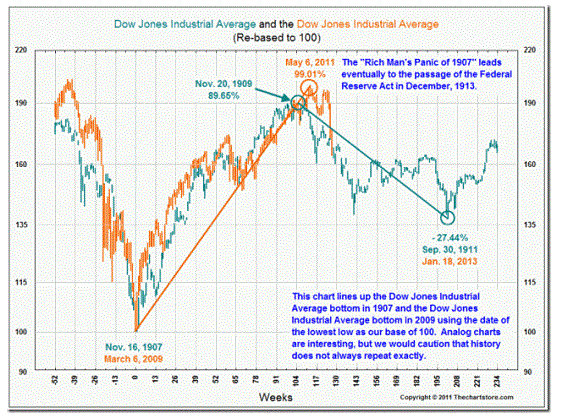 The only difference is the Fed launched QE2 late in 2010, which kept the rally alive for another 6 months. But as we can see, it didn’t change the future decline, it simply set it forward a few months: the current market has now caught up with the 1907 decline.

The past is simply one possible pattern of many to consider, but the remarkable similarity of these two charts suggests that there may be more downside ahead.

One last point: those who exited the stock market won’t care if it crashes because they opted out of playing the risky game altogether.

1 thought on “If The Market Crashes, Who Owns Enough Stock To Even Care?”