Ok, someone please explain this one to us because we must be a little slow. Wasn’t the whole thing with the debt ceiling hike such that no more Congressional melodramas would have to be inflicted upon the population until after Obama [won|lost] the 2012 elections? Because according to the one again exponentially increasing debt balance of the US Treasury (there is another $51 billion in debt/cash coming in next week), the total US treasury balance (subject to the ceiling) is $14.54 trillion (and $14.58 trillion for total), an increase of $20 billion overnight, the Treasury will hit its latest ceiling no later than the end of September. As the latest DTS statement indicates, the debt ceiling now is $14.694 trillion: a number which Tim Geithner will hit in about a month. So if this is due to a planned expansion as part of the two step plan, we would like to understand how it works, because the $400 billion additional ceiling is barely sufficient to cover the catch up in funding for the SSN and the various governmental trust funds. And the far bigger concern is that tax receipts are about to plunge courtesy of the imminent double dip. So we wonder just based on what assumptions does the Treasury believe that its issuance needs will be met by this paltry debt ceiling. 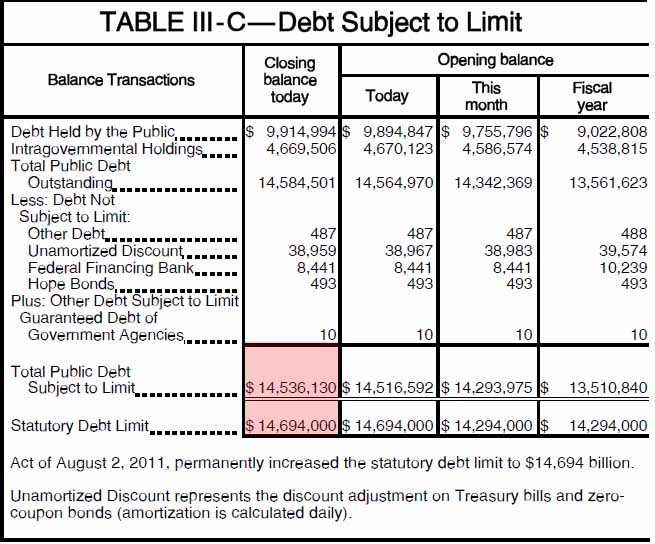 2 thoughts on “US Treasury Adds Another $20 Billion In Debt Overnight! – Just $160 Billion Below Revised Debt Ceiling!”