Fumiya Tanabe, former head of the research at Japan Atomic Energy Agency, will present the result of his research on Reactor 3 at Fukushima I Nuclear Power Plant in the upcoming Atomic Energy Society of Japan‘s conference next month. 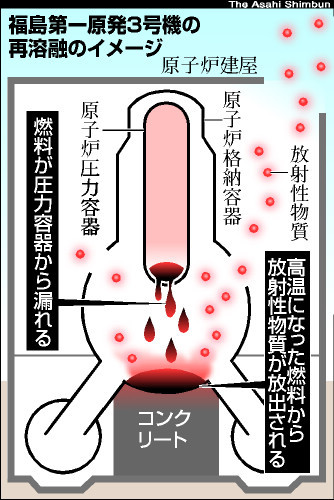 Tanabe thinks the fuel melted and dropped to the bottom of the Reactor Pressure Vessel of Reactor 3 by March 14’s explosion; then the melted fuel stayed there, cooled by more than 300-tonnes/day water. However, the amount of water injected dropped to only 24 tonnes per day from March 21 to 23, and 69 tonnes per day on March 24, probably due to increased pressure within the RPV.

It caused the melted fuel to heat up again, and the fuel melted through the RPV and dropped onto the Containment Vessel (pedestal; see the diagram from Asahi).

According to Tanabe, the amount of water from March 21 to 24 was only about 11 to 32% of what was needed to remove the decay heat, and within one day the melted fuel would attain the melting temperature again.

Tanabe thinks this massive “re-melting” caused the release of a large amount of radioactive materials into the environment which caused a spike in air radiation in wide areas of Tohoku and Kanto including Tokyo, and most of the re-melted fuel dropped from the RPV to the Containment Vessel.

The article doesn’t say what Tanabe thinks has happened to the melted fuel that dropped onto the Containment Vessel since.

But the article does say this:

TEPCO hopes to have a “cold shutdown” where the temperature at the bottom of the RPV is low [below 100 degrees Celsius] as the target for winding down the nuclear accident. But if the fuel core is mostly melted and has dropped down to the Containment Vessel, it may affect the “roadmap”.

No kidding. Yes it may. Where have you been, Asahi, for all these months? Is this news to you?

Tanabe’s chart (from Asahi article) plotting the air radiation level (in microsieverts/hour) shows a spike on March 21. It rained that day in Tokyo. 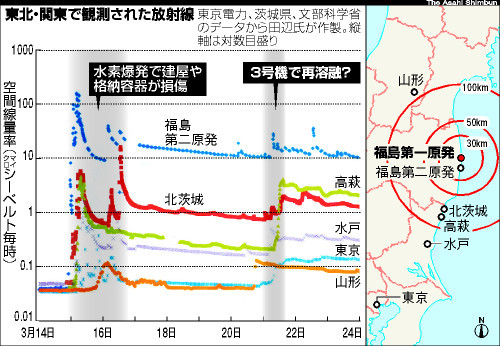