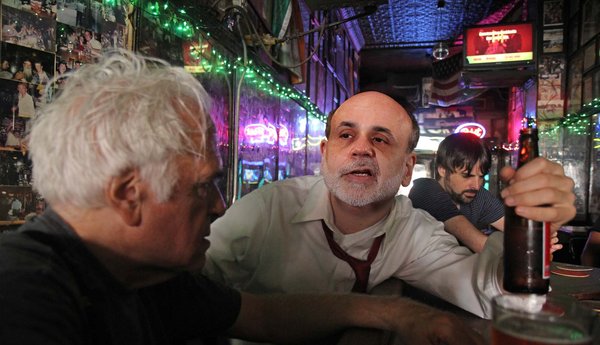 SEWARD, NE—Claiming he wasn’t afraid to let everyone in attendance know about “the real mess we’re in,” Federal Reserve chairman Ben Bernanke reportedly got drunk Tuesday and told everyone at Elwood’s Corner Tavern about how absolutely fucked the U.S. economy actually is.

Bernanke, who sources confirmed was “totally sloshed,” arrived at the drinking establishment at approximately 5:30 p.m., ensconced himself upon a bar stool, and consumed several bottles of Miller High Life and a half-dozen shots of whiskey while loudly proclaiming to any patron who would listen that the economic outlook was “pretty goddamned awful if you want the God’s honest truth.”

“Look, they don’t want anyone except for the Washington, D.C. bigwigs to know how bad shit really is,” said Bernanke, slurring his words as he spoke. “Mounting debt exacerbated—and not relieved—by unchecked consumption, spiraling interest rates, and the grim realities of an inevitable worldwide energy crisis are projected to leave our entire economy in the shitter for, like, a generation, man, I’m telling you.” 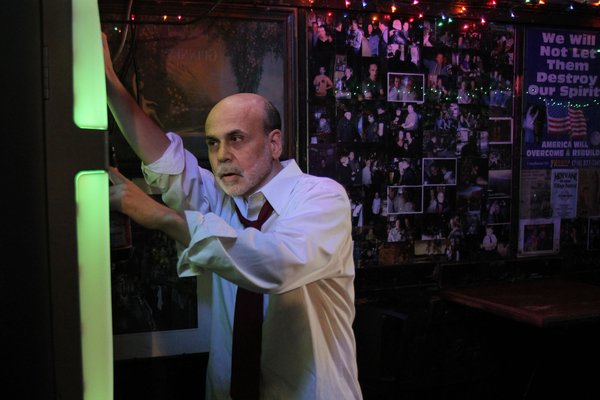 A drunken Bernanke attempts to find the Aerosmith song “Back In The Saddle” on the bar jukebox.

“And hell, as long as we’re being honest, I might as well tell you that a truer estimate of the U.S. unemployment rate is actually up around 16 percent, with a 0.7 percent annual rate of economic growth if we’re lucky—if we’re lucky,” continued Bernanke, nearly knocking a full beer over while gesturing with his hands. “Of course, if everybody knew that, it would likely cripple financial markets across the entire fucking globe, even in various emerging economies with self- sustaining growth.”

After launching into an extended 45-minute diatribe about shortsighted moves by “those bastards in Congress” that could potentially exacerbate the nation’s already deeply troublesome budget imbalance, the Federal Reserve chairman reportedly bought a round of tequila shots for two customers he had just met who were seated on either side of him, announcing, “I love these guys.”

Numerous bar patrons slowly nodded in agreement as Bernanke went on to suggest the United States could pass three or four more stimulus packages and “it wouldn’t even matter.”

“You think that’s going to create long-term economic growth, let alone promote job creation?” Bernanke said. “We’re way beyond that, my friend. There are no jobs, okay? There’s nothing. I think that calls for another drink, don’t you?”

While using beer bottles and pretzel sticks in an attempt to explain to the bartender the importance of infusing $650 billion into the bond market, the inebriated Fed chairman nearly fell off his stool and had to be held up by the patron sitting next to him.

Another bargoer confirmed Bernanke stood about 2 inches from her face and sprayed her with saliva, claiming inflation was going to “totally screw” consumer confidence and then asking if he could bum a smoke.

“Sure, we could hold down long-term interest rates and pursue a program of quantitative easing, but c’mon, we all know that’s not going to make the slightest bit of difference when it comes to output, demand, or employment,” Bernanke said before being told to “try to keep [his] voice down” by the bartender. “And trust me, with the value of the U.S. dollar in the toilet, import costs going through the roof, and numerous world governments unprepared for their own substantial debt burdens, shit’s not looking too good for us abroad, either.”

“God, I’m so wasted,” added Bernanke, resting his head on the bar.

Later in the evening, Richard Kampman, a truck driver who was laid off in 2010, said Bernanke approached him in the men’s restroom and attempted to strike up a conversation about various factors contributing to the current financial crisis.

“He stumbled up to the urinal and started mumbling on about the depressed housing sector or something,” said Kampman, who claimed Bernanke had to use both hands on the wall to steady himself. “Then after a while he just sort of stopped and I couldn’t tell if he was laughing or crying.”

“Then he puked all over the sink and the mirror,” Kampman added.

Customers at the bar told reporters the “shitfaced” and disruptive Bernanke refused to pay for his drinks with U.S. currency, claiming it was “worthless.” Witnesses also confirmed that near the end of the evening, Bernanke put money into the jukebox and selected Dire Straits’ “Money For Nothing” to play five times in a row.

“This is what it’s all about,” said Bernanke, who reportedly danced alone in the middle of the dark tavern. “Fucking love this song.”