If you know that Joe Biden is a fascist ZIONIST…

– TRAITOR Joe Biden on Shalom TV: ‘I am a ZIONIST’ (Video)

… then you know why everybody else must be a terrorist.

And the Tea Party…

– Max Keiser on RT: ‘America Will Lose Its Sovereignty’ (To International Banksters)

…is funded by the elitists. 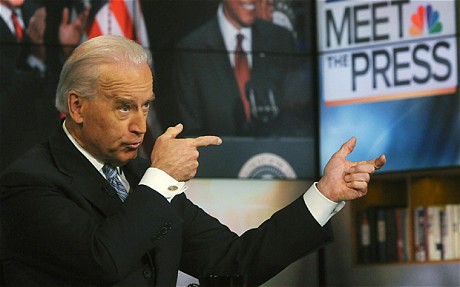 – Joe Biden compares the Tea Party to terrorists. Is this the most crass and nasty US presidency in decades? (Telegraph, Aug. 2, 2011):

Earlier today Politico broke the astonishing story of Joe Biden supporting the charge by Democrat Congressman Mike Doyle of Pennsylvania that Tea Party Republicans had “acted like terrorists” over the debt issue. According to Politico’s report, based on eyewitness accounts:

Vice President Joe Biden joined House Democrats in lashing tea party Republicans Monday, accusing them of having “acted like terrorists” in the fight over raising the nation’s debt limit. Biden was agreeing with a line of argument made by Rep. Mike Doyle (D-Pa.) at a two-hour, closed-door Democratic Caucus meeting.

“We have negotiated with terrorists,” an angry Doyle said, according to sources in the room. “This small group of terrorists have made it impossible to spend any money.”

Biden, driven by his Democratic allies’ misgivings about the debt-limit deal, responded: “They have acted like terrorists,” according to several sources in the room.

There is something deeply sad and disconcerting when the vice president decides to compare opposition legislators in Congress with terrorists simply because he disagrees with their views and principles. This is the kind of ugly, threatening rhetoric that has no place at the heart of the US presidency. About a third of the country are favourable towards the Tea Party, according to Gallup – i.e. tens of millions of Biden’s fellow Americans. Does he label them terrorists too?

Working in Washington I’ve met numerous Tea Party supporters and have always found them to be unfailingly patriotic people who love their country and feel passionately about the need to rein in Big Government through the democratic process. To compare their elected representatives to terrorists who seek to destroy the United States and everything it stands for is gravely insulting to hard working Americans who have in many cases devoted their lives to serving their country.

Power carries with it responsibility and the vice president has monumentally abused it with his remarks today. His conduct is hugely embarrassing for the second most powerful figure at the helm of the world’s only superpower. There is a fundamental difference between robust political debate and labeling your opponents as enemies of the state and proponents of violence.

Joe Biden has clearly overstepped the line with his comments, and brought the office of the vice president into disrepute. His actions today are symbolic of a White House that increasingly looks bitter, crass and petty in its behaviour as public opinion moves firmly against it. Biden’s outburst is a sign of the Left’s growing desperation 30 months into the Obama administration, and only further reinforces the image of decline and decay sinking in at 1600 Pennsylvania Avenue.