As the conflict in East Asia regarding the South Asian Sea, seems to have quieted down temporarily, the US – Iran conflict is reemerging. As mentioned before: warfare, politics and resources are inextricably joined and this case is no different. Oil, the Dollar and Iran are completely interconnected.

This weeks Iran launched an Oil Bourse on Kish Island. At the same time, former CIA officer and middle east expert Robert Baer stated that Israel is preparing to possibly attack on Iran in the Fall. Meanwhile, a US Drone was shot down Iran and a senior Iranian nuclear scientist was assassinated. There are a lot of behind-the-scenes secret activities taking place right now that make it hard to say with any definitiveness what will happen next in this theatre.

Importantly, readers must understand that the United States is actually in an active war with Iran. Most think the US is not at war with Iran because the US does not have troops inside Iran such as it does in Afghanistan, Pakistan, and Iraq, and is not engaging in behind-the-scenes support like in Libya, Yemen, and Somalia. The US is involved in active war with Iran in the form of a Siege: 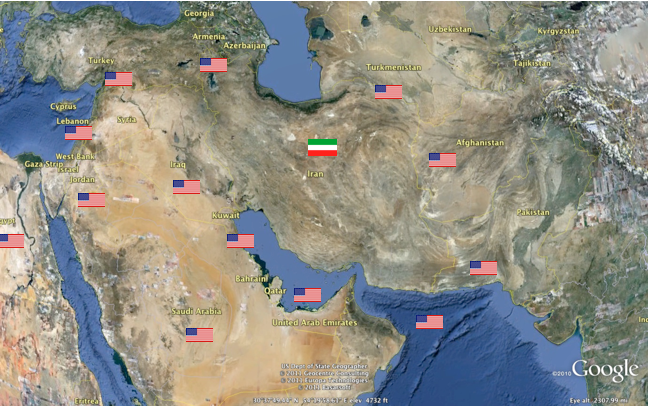 In the last decade, US military presence surrounding Iran has vastly increased. Starting clockwise around the Iranian Plateau:

Turkmenistan, Uzbekistan, Tajikistan…the former Soviet States to the northeast of Iran have cooperated with the US by providing base support such as for aircraft landing and other logistic supports.

Afghanistan, Pakistan (AF-PAK)…active war since 9/11 invasion, and US military and CIA activities inside Pakistan. Pakistan has already received billions in US military aid. Also, western supported Jundallah terrorists have attack Iran from inside southwest Pakistan.

United Arab Emirates, Qatar, Bahrain, Saudi Arabia, Kuwait…The sparsely populated Arab countries have been receiving full support from the Anglo-sphere for more than a century. Currently these areas are home to US ground, naval and air forces.

Iraq…home to US troops and massive US military political involvement after the invasion and toppling of Saddam. Also home to anti-Islamic Republic of Iran group MEK with US acquiescence.

Turkey…though acting more independently in recent years, it was an original NATO member and is in agreement with the US over Libya.

In addition, US aircraft carriers in the Persian Gulf and the Indian Ocean, create a complete physical encirclement.

The United States has also been increasing sanctions on Iran, its corporations, and on particularly people. This has deeply hurt the domestic economy and flow on money in and out of the country. As such, inflation is near hyperinflation levels due to the money printing of the government for paying for domestic expenses. Prices are skyrocketing.

The banking ban against Iran has made it impossible for Iran to get paid for the oil it sells to countries like India and China. Those countries already owe Iran billions in dollars for previously received oil. China has hinted about possibly bartering with Iran in exchange for the oil.

“This is an old-fashioned Siege” 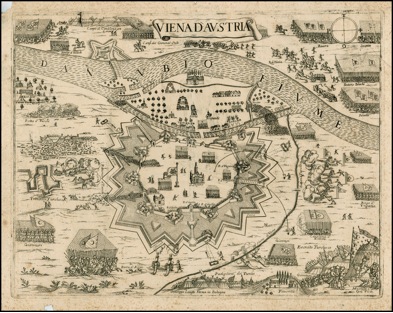 According to Wikipedia a Siege is a:

“A siege is a military blockade of a city or fortress with the intent of conquering by attrition or assault. Generally speaking, siege warfare is a form of constant, low intensity conflict characterized by one party holding a strong, static defensive position. A siege occurs when an attacker encounters a city or fortress that cannot be easily taken by a coup de main and refuses to surrender. Sieges involve surrounding the target and blocking the reinforcement or escape of troops or provision of supplies, typically coupled with attempts to reduce the fortifications by means of siege engines, artillery bombardment, mining (also known as sapping), or the use of deception or treachery to bypass defences. Failing a military outcome, sieges can often be decided by starvation, thirst or disease, which can afflict either the attacker or defender.”

The siege of Iran has blocked the trade of of goods and financial transactions with the country. The US has also launched drones inside Iran’s border (with one shot down recently) as well as shooting down Iranian planes and ships in the past. The US also supports terrorist entities like the MEK and Jundallah against Iran, and launched the Stuxnet computer virus to hurt Iranian nuclear infrastructure; fulfilling the definition of a siege.

The conflict escalated recently with Iran finally deciding to open the Kish Island Oil Bourse.  This oil bourse is an oil commodity trading hub that would challenge the world’s biggest oil trading exchange in the US. The sales are currently priced in Dollars, but there have been threats of using Euros, Yen, and Yuan for oil sales.

Every time Iran has threatened to do this in the past, it has been slapped back by US. Completing oil transactions in non-dollar currencies would greatly diminish the power of the US internationally by decreasing demand for the US Dollar. Iran realizes this, but has been afraid to act on bringing it to reality. It is also yet to be seen if oil purchasing countries would buy the oil in their own currencies and challenge US Dollar global hegemony.

There is a history of challenges to the trade of international oil with only US Dollars. The Shah of Iran flirted with the idea before being deposed. Saddam Hussein in Iraq began selling some oil in euros before being removed by the US by George W. Bush. Currently Qaddafi of Libya is battling for his life for what could partially be his attempts at creating an Africa Gold Currency. Ahmadinejad could be next in line. (YouTube Video Link)

Legally, the constitutional issues of whether the war against Iran is legitimate may be moot, as numerous Congressional Resolutions in the past have sanctioned many of these activities, making “declared war” in the consideration of those in the beltway.

Economically, one can see the role oil plays in this, and how it will only push the price up. More war means more oil consumption and rising prices. The supply disruption from Iranian oil not being able to reach the market means more price fluctuations. The Indians have mentioned turning to Arabia their oil needs, but there might not be enough in Arabia to go around. In addition, if Iran chooses to challenge the US in its Oil Bourse, there will be a lot of volatility in oil, probably to up side.

There are other issues that have to be considered. What will happen to China’s energy supply? What will China’s alternative source be? Does this make nuclear energy a more viable alternative source for power? However, this sort of volatility does create great opportunities for investment and speculation.

When will we see a ending to this siege? Timing these things is very difficult. Maybe sooner, maybe later.