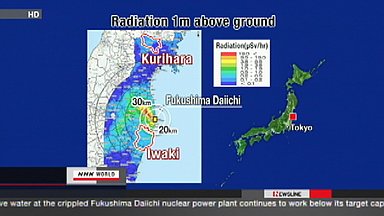 The ministry on Wednesday released a map showing radiation levels at locations one meter above the ground in Miyagi Prefecture, north of Fukushima, based on the results of an aerial survey from June 22nd through 30th.

Some parts of Kurihara City, about 150 kilometers north of the plant are light blue, indicating that the air there was 0.2 to 0.5 microsieverts per hour.

That’s similar to areas close to the crippled plant, such as Iwaki City in Fukushima Prefecture, about 50 kilometers from the radioactive source.

Radioactive cesium far above the government standard was detected in rice straw for cattle feed collected by a supplier in Kurihara City.