– The Papas And The Papas: Greece’s First Family

– Greece: Default Is Inevitable (By Mario Blejer, who was former president of the Central Bank of Argentina, and has held top positions at the International Monetary Fund, the World Bank and the Bank of England.)

– The Big Fat Greek Sell-Off: Foreigners (Like Rothschild) Have Come To Sell The Family Silver

– Here Is What Happens After Greece Defaults

… and to help us to destroy the Illuminati banksters, exposing their gigantic, unprecedented silver short position:

– Silver Market Manipulation Exposed: BIS Changed Silver Data From $203 to $93 Billion in Silver Liabilities: $93 Billion Is Still Absurdly Large At About 6.2 Billion Oz. Of Silver, Or About 8.8 Years Of Worth Of World Annual Mine Production Of Silver

– Accordingly, it sure is a good thing that the world’s biggest derivatives player – J.P. Morgan – has ‘seemingly’ NEVER, EVER made a bet even ’1 % wrong’ with their 80 Trillion derivatives book. The Morgue has a Market Cap of roughly $180 billion. A wrong bet of a mere 1% on their ‘book’ would translate to a loss of $800 billion dollars eviscerating their entire capital base more than four times over. The knock on effect from such an event would trigger multiple tsunamis reverberating through the global financial system. Sounds absurd, but it’s pure math. 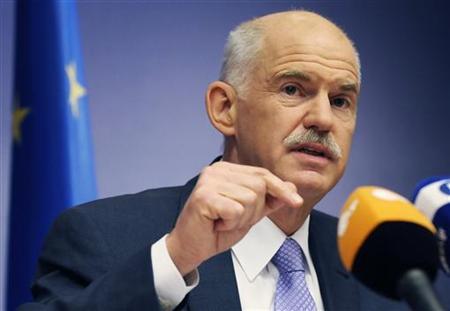 “The current mood doesn’t help us to get through this crisis,” Papandreou told the Financial Times Deutschland, in a brief preview of an interview to be published in the paper’s Thursday’s edition.

“This uncertainty scares investors. If we don’t get a decision soon supporting the second Greek programme so that the country can begin its far-reaching reforms, the programme itself could be held up.”

The prime minister said he was open to proposals currently being discussed in the euro zone about potentially using the existing euro zone bailout scheme — the European Financial Stability Facility (EFSF) — for Greece to buy back its debt.

“This idea could alleviate Greece’s debt burden and also its debt servicing costs,” Papandreou told the newspaper. But such issues had to be sorted out quickly: “It could theoretically take two weeks or much longer, which would cause much more damage.”

The 440 billion euro (388 billion pounds) EFSF, set up last year shortly after the first Greek bailout, has been used to help Ireland and Portugal.

Some in the European Central Bank and Germany have objected to such an idea, though the finance ministry in Berlin said on Wednesday such a move was “theoretically” possible already, suggesting a change in the German stance.

In another section of the interview released later, Papandreou said he hoped to hire private sector tax collectors to boost efforts to collect owed taxes and combat evasion.

“We will probably outsource this task to private companies, because we have the impression the state administration cannot do it and has not proven itself very effective in the task,” he said, adding that around 14,000 Greeks owed some 36 billion euros in taxes.