52,547 Bq/Kg of of Cesium radiation measured in soil samples collected just outside of Tokyo over 135 miles south of the Fukushima nuclear power plant.

A reader from Japan has sent me a copy of his official Lab results for nuclear radiation soil samples collected in Kashiwa, Japan, which is on the outskirts of Tokyo and over 135 miles south of the Fukushima nuclear reactor. The lab results show that 52,547 Becquerels Per Kilogram Of Cesium Radiation was found in the sample. 23,663 Bq/Kg of Cesium 134 radiation was found. 28,884 Bq/Kg of Cesium 137 was detected.

I live in japan 135 miles / 220 Km south of Fukushima, in Kashiwa. I had the soil in Kashiwa professionally tested here are the official results for the levels of Cesium-137 and 134 and Iodine-131 only. No lab in Japan offers testing for any of the other dangerous radioactive elements like Plutonium / Strontium / Tellurium or Curium, all elements that were released in the explosion Use these results as you see fit, yes I know the results are nothing less than horrifying, what is even more terrifying is that the soil sample was taken from the side of the street where children walk everyday and not from where the elements could accumulate. This is the Cesium-137/134 and Iodine-131 levels of the soil in Kashiwa, that I had sent in and officially tested by a lab here in Japan. Jon-in-Japan

52,547 Becquerels per kilogram of cesium radiation found in soil on outskirts of Tokyo, 135 miles south of Fukushima nuclear power plant 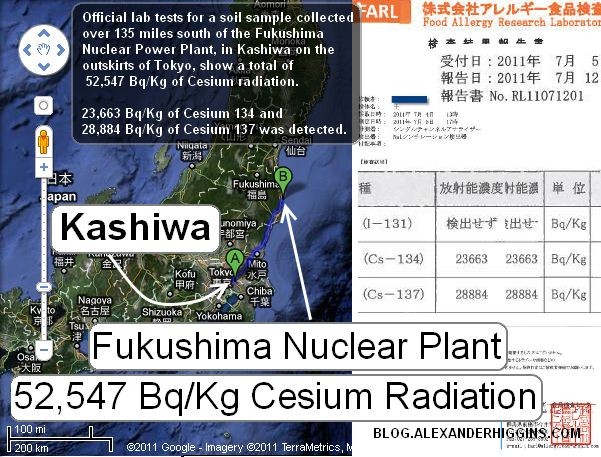 Kashiwa is shown on the map attached above as well as a partial image of the official lab results and the location of Kashiwa relative to Tokyo and the Fukushima nuclear power plant. 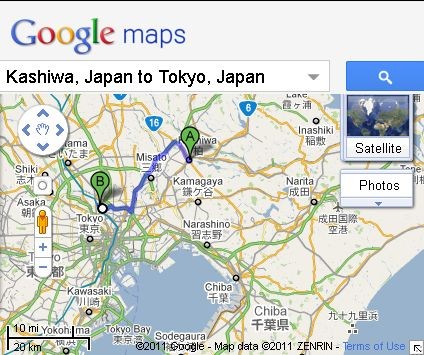 The second image attached above shows a Google Map with driving directions from Kashiwa to Tokyo to give a perspective on how close the city is to Tokyo.

As shown in the third image attached above, the official lab result test found 23,663 Bq/Kg of Cesium 134 radiation and 28,884 Bq/Kg of radioactive Cesium 137 for a total of 52,547 Becquerels per kilogram of Cesium Radiation

Putting the test results into context

During Chernobyl the threshold for declaring an area a permanent dead zone and issuing a mandatory evacuation was 500,000 Bq/kg so this test, which is by far the highest result for soil yet that I am aware of outside of the area already evacuated around Fukushima, comes in about 1/10th of the permanent Chernobyl “dead zone” threshold.

Nuclear scientists working at the University of Berkeley in California, who are doing their own radiation testing in the United States, have also pointed out radioactive substances accumulate in broad green leafy plants at a factor of 5-6 times above the surrounding soil. That would indicate the grass or other green plants growing in this soil may have radioactive contamination up to 250,000 Bq/Kg which is extremely high and approaching over half of the 500,000 kilogram permanent “dead-zone”threshold.

This soil sample is also over 50 times higher than the 2,000 Bq/Kg threshold for international nuclear waste.

Of course, Japan has totally disregarded that threshold to deal with the Fukushima emergency and has set an interim limit of 8,000 Bq/Kg, under which radiation contaminated substances can be buried without taking the normal precautions required to properly dispose of radioactive waste. Still, this soil sample is almost 7 times higher than that limit.

This reading is also startling because as shown in the official nuclear fallout readings from the Government of Japan, as shown on the map on this page, show the highest levels of radiation to the northwest of the Fukushima power plant. The reason for that is most of the prevailing winds have blown to the northwest, north and to the northeast out over the pacific. So far that has spared Tokyo and central Japan as the radiation has been blowing away from these locations. This high of a reading so close to Tokyo makes the situation much more dire as we can clearly see radiation levels very close to Tokyo now building up to permanent “dead-zone” levels.

This high of a level of contamination so close to Tokyo also directly contradicts all official government tests done in the area so far. Those tests so far have shown no “levels of concern” in anything except for sewage slag.

It should be pointed out that independent tests continue to show much higher levels of radiation than the government admits to or reports in their tests. As the YouTube Video attached on this page shows high levels of radiation have been detected near ground levels in Tokyo orders of magnitudes above the levels just a few feet higher. The Government is doing there tests a good distance from the ground which allows them to assert the radiation levels are safe even though people in the area receive the doses of radiation at ground level.

It is also not surprising that this soil sample contradicts government reported numbers since Japanese officials forced school children to clean radioactive dirt from swimming pools insisting it was safe from radiation, even though the officials were well aware the pools are located in areas designated as hotspots with radiation readings well above Chernobyl evacuation limits.