(Not that I’m faulting those hard-working bots, mind you.)

For that 9-minute job, they received 5.34 millisieverts radiation.

Here’s TEPCO’s handout for the press on July 9. The English explanation reads like a Google translation (maybe it is) but you get the idea. (I looked at the Japanese handout.) 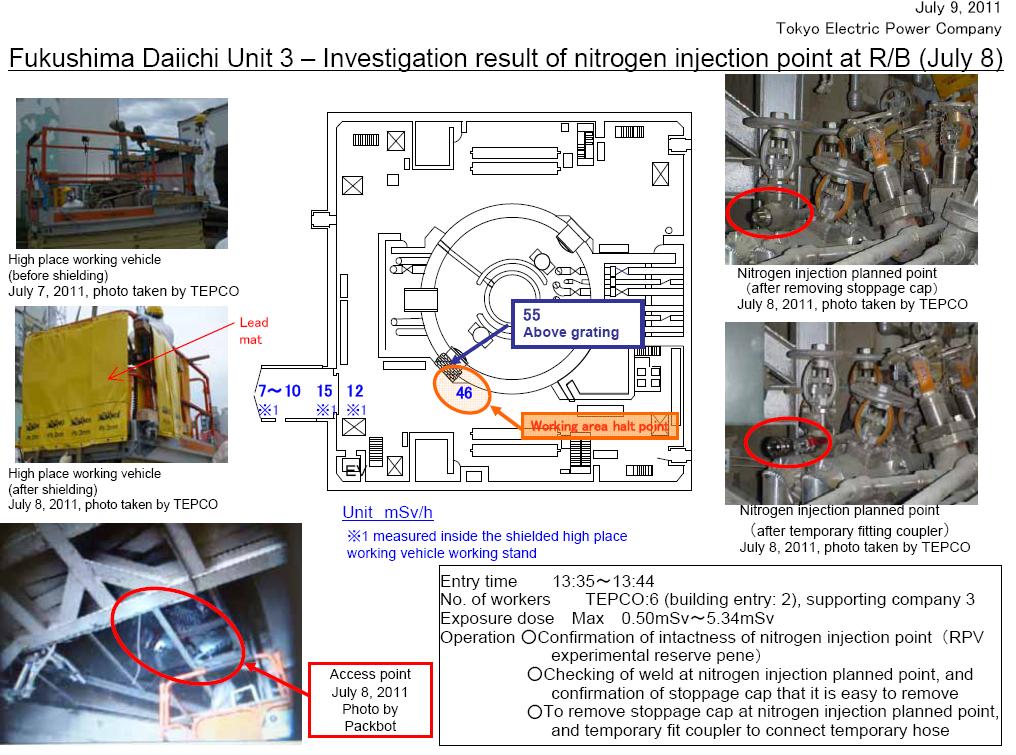 TEPCO seems to be in a great hurry to start the nitrogen injection into the Containment Vessel of the Reactor 3. At first I thought it was just a window-dressing effort for the national government who had decided, on some inexplicable reason or unreason, it would be safe enough for people to come back to their homes in the planned evacuation zone as long as the nitrogen gas was pumped into the Reactor 3 Containment Vessel, just so that the government could tell the citizens “See what we’ve done for you? It’s now so much safer you can go back!”

Or, the Reactor 3 is actually in danger of blowing up in a hydrogen explosion.

They have hardly done any work on other reactors. The Reactor 1’s basement water, last seen as gushing out 4 sieverts/hour steam through to the 1st floor, hasn’t been touched. That water doesn’t even go to the water treatment system. I haven’t heard any news of TEPCO sampling the water for analysis. There’s hardly any news on the Reactor 2, after they opened the double door and supposedly drove out the radioactive materials and moisture inside. They still don’t know the water level (if any) inside the Reactor 2’s Pressure Vessel, because the pressure gauge and water gauge don’t work. As for the Reactor 4, they’ve been injecting water into the Reactor well and the equipment pool from the bottom of the Reactor Pressure Vessel, which seems peculiar. Other than that, and the photo of a hot-spring-like Spent Fuel Pool on the 5th floor, there’s not much information coming out.