From Mike Krieger of KAM LP

“Whenever the economic life of a nation becomes pre¬carious, the central government is forced to assume additional responsibilities for the general welfare.  It must work out elaborate plans for dealing with a criti-cal situation; it must impose ever greater restrictions upon the activities of its subjects; and if, as is very likely, worsening economic conditions result in polit¬ical unrest, or open rebellion, the central government must intervene to preserve public order and its own authority. More and more power is thus concentrated in the hands of the executives and their bureaucratic managers. But the nature of power is such that even those who have not sought it, but have had it forced upon them, tend to acquire a taste for more. “Lead us not into temptation,” we pray — and with good reason; for when human beings are tempted too enticingly or too long, they generally yield. A democratic constitu¬tion is a device for preventing the local rulers from yielding to those particularly dangerous temptations that arise when too much power is concentrated in too few hands.”
– Aldus Huxley, Brave New World Revisited

“A nation can survive its fools, and even the ambitious. But it cannot survive treason from within. An enemy at the gates is less formidable, for he is known and carries his banner openly. But the traitor moves amongst those within the gate freely, his sly whispers rustling through all the alleys, heard in the very halls of government itself. …He rots the soul of a nation, he works secretly and unknown in the night to undermine the pillars of the city, he infects the body politic so that it can no longer resist.”
– Marcus Tullius Cicero (106 BC—43 BC)

QE3:  It Will Merely Keep the Lights On

This is a piece that has been festering in my head for quite some time now and I was waiting for the right moment to pen it.  That time is now.  In some ways The Bernank made a huge mistake by not launching QE3 right away when he had the chance.  Now don’t get me wrong, I am not in favor of any of this nonsense and I think The Bernank’s profession needs to go the way of the dodo bird, but I mean from the perspective of a Central Banker I think he made a big mistake by taking a breather from at least the printing and manipulations that they admit to.  The reason I say this is because up until the last month or so The Fed had been essentially telling the American sheeple that all was under control and that since The Bernank had studied the Great Depression and Japan he could save us from all the mistakes that were made back in those less enlightened times.  The Fed was saying that they could pull off the equivalent of preventing a serious hangover for someone that chugged an entire bottle of tequila.  They basically claimed to have found a way to break the laws of the universe.

Unfortunately for them, the cruel forces of reality have intervened and proven that they actually did not figure out how to change the immutable laws of physics.  This truth became abundantly clear at The Bernank’s most recent press conference (which if he is smart will be his last) where it became all too clear that even he comprehends on some level that his theories and in fact his entire life has been a complete waste of time and energy.  That would be ok if he were confined to some University lecture hall; however, his lunacy was unleashed on the entire planet and we will all suffer the dire consequences of it for many years to come.  He has basically shoved another bottle of tequila down the throat of the already passed out drunkard and now he not just unconscious but is DYING.

The response by TPTB to the utter failure of QE2 and everything else these mad intellectually bankrupt central planners have done was to try to smash commodities.  First, they released oil from the SPR in an act that more than any other proved to me we are in now in the final stage of this thing.  Not only was it pathetic in its desperation to anyone that knows the commodity markets but it was an utter failure.  For example, wholesale gasoline prices are now 5% HIGHER than they were the day before the raid.  Then just last week there was the crop planting data, which everyone I talked to involved in the agricultural sector thought was a complete sham.  Nevertheless, the “data” was used to create a 10% plunge in corn and 9% smash in wheat.  Of course, China was reported to have been a size buyer on the weakness.  How convenient.  What a disgrace.  This thing had TPTB fingerprints all over it and that is exactly why I do not participate in futures markets at all.  It’s a giant controlled game in the short-term.  Nevertheless, grains prices are of course moving back up again and I expect a huge spike in food prices in the months ahead related to weather that has already occurred around the world and the dire flood situation on the Missouri river.  More importantly, if TPTB continue to play their little games in the commodities futures markets we are going to have actual shortages.  In oil and in food in particular.  They are playing with fire.  Big time.  Reread the quote at the top by Huxley.  Whenever anyone one claims they need to do something for the “general welfare” run the other way as far and as fast as humanly possible.  That is the line of every tyrant and wanna be dictator.

Ok, so time to talk about what is next.  The Bernank has already gone too far and there is no turning back.  There will be QE to infinity until the point where the system collapses on itself, which is probably not too far off once the next round of official QE is started.  What form this may take is anyone’s guess but as I mentioned in a recent email, the whole rate cap idea makes the most sense since it will allow infinite QE to occur without having to announce subsequent iterations.  The simple fact that they tried to pretend QE would end and then tried to raid commodities to create the justification for it later on demonstrates to me how much trouble we really are in.  If The Bernank had merely gone ahead and continued the program he had a CHANCE of perpetuating Disneyland for a little longer at least.  Instead, he is praying that the economy can stand on its own, which of course it can’t and so then when he launches into QE3 after the economy weakens and proves QE1 and QE2 did nothing to create a self-sustaining recovery the entire mindset and understanding going into the next money printing party will be entirely different from a psychological standpoint.  QE3 will not lead to confidence or anything even similar to the last rounds.  Rather it will be used to basically “keep the lights on.”  More than anything it will serve as that proverbial “bell” that will ring and in the minds of the savviest and wealthiest people on the planet to get the hell out of the system while they can. This is inevitable.  It is already happening. The stampede is yet to come.  But come it will.  It is time for everyone to take additional steps whatever that may mean for you personally.  I know I am.   Don’t get gorged. 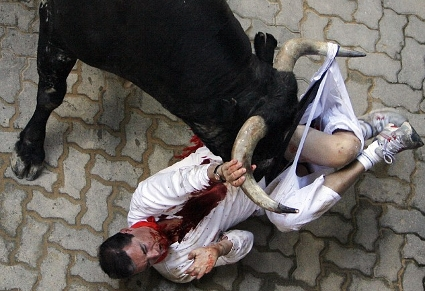 There are two pieces I suggest as must reads for the weekend.  First, I have attached an incredible piece (PDF) by the always brilliant Brodsky and Quaintance.  Second, the latest from Martin Armstrong.  Read it here

One last thing, given the market action today I would expect some sort of major desperate move by TPTB on Monday.  Whenever we have had days like this that his what they have done.  Brace yourself indeed.  Have a great weekend.