If the situation is that dire, then how come the US still has a AAA rating? (Rhetoric question.)

Ready for the greatest financial collapse in world history? Although I do not believe that it will happen now. They will just agree to raise the debt limit (again) and turn on the printing press (again) and create a monster hyperinflationary depression. This is the Greatest Depression. Prepare for collapse! 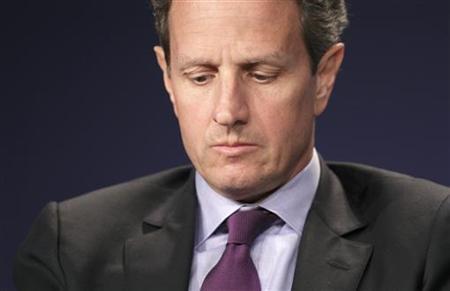 A small team of Treasury officials is discussing options to stave off default if Congress fails to raise the country’s borrowing limit by an August 2 deadline, sources familiar with the matter said on Wednesday.

Senior officials, including Treasury Secretary Timothy Geithner, have repeatedly said there are no contingency plans if lawmakers do not give the U.S. government the authority to borrow more money.

But behind the scenes, top Treasury officials have been exploring ways to prevent a financial meltdown that would be triggered if the government were unable to pay its bills on time, sources told Reuters.

Treasury has studied the following issues:

– If the U.S. Constitution allows President Barack Obama to ignore Congress and the government to continue to issue debt

– Whether a 1985 finding by a government watchdog gives the government legal authority to prioritize payments.

The Treasury team has also spoken to the Federal Reserve about how the central bank — specifically the New York Federal Reserve Bank — would operate as Treasury’s broker in the markets if a deal to raise the United States’ $14.3 trillion borrowing cap is not reached on time.

The U.S. government currently borrows about $125 billion each month. The Obama administration wants Congress to raise the limit by more than $2 trillion to meet the country’s borrowing needs through the 2012 presidential election.

The contingency discussions, which have remained a closely guarded secret throughout weeks of negotiations with Congress over the debt ceiling, are being led by Mary Miller, Assistant Secretary for Financial Markets, who is effectively custodian of the country’s public debt.

Miller’s team has debated whether Obama could ignore Congress and order continued borrowing — by relying on the 14th Amendment of the U.S. Constitution — if it fails to raise the borrowing cap.

The fourth section of the 14th Amendment states the United States’ public debt “shall not be questioned.” Some argue the clause means the government cannot renege on its debts.

Obama dismissed talk of invoking the amendment on Wednesday. “I don’t think we should even get to the constitutional issue,” he said. “Congress has a responsibility to make sure we pay our bills. We’ve always paid them in the past.”

HINT OF PLAN B COULD HURT TALKS

The White House declined to comment on the discussions at Treasury, but administration officials sought to tamp down talk of relying on the 14th Amendment.

There has been growing speculation in Washington in recent days that the administration could use the amendment to ignore the congressionally imposed limit on the amount of money the United States can borrow.

“Despite suggestions to the contrary, the 14th Amendment is not a failsafe that would allow the government to avoid defaulting on its obligations,” said White House spokeswoman Amy Brundage.

Miller’s team has discussed the Government Accountability Office’s 1985 assessment that Treasury has the authority to prioritize payments in the event of a default — an option Treasury officials have been wary of.

The administration’s nightmare scenario is that investors panic at the prospect of a default, triggering a crisis that eclipses the 2008 financial meltdown. That could plunge the U.S. economy into another recession, something that could doom Obama’s re-election prospects in 2012.

Some conservative Republicans have argued the Treasury can prioritize payments and manage a default. The administration wants to keep lawmakers focused on the August 2 deadline, and even a hint of a “Plan B” could lessen the urgency to strike a deal by then.

“As we have said repeatedly over the past six months, there is no alternative to raising the debt limit,” Treasury spokeswoman Colleen Murray said when asked to comment on the Treasury discussions.

“The only way to prevent a default crisis and protect America’s credit-worthiness is to enact a timely debt limit increase, which we remain confident Congress will do.”

Obama meets leaders from both parties at the White House on Thursday as he seeks to get an agreement to cut trillions from the U.S. deficit, which Republicans have demanded in exchange for their support to raise the debt limit.

The fear of any loss of momentum in the debt and deficit talks is so great that even in their private conversations with former colleagues and investors, administration officials are refusing to admit to contingency discussions.

“There has to be contingency planning,” said one former Obama administration official. “But they won’t even tell me that.”

That view was echoed by numerous former officials from the Clinton, Bush and Obama administrations.

“You have to have a backup plan. If you are relying on Congress to avoid the possibility of an Armageddon, you can’t just bet on that,” said Keith Hennessey, who headed the White House National Economic Council during President George W. Bush’s administration.

In August, the Treasury will take in roughly $172 billion, but is obligated to make $306 billion in payments — meaning it cannot pay about 45 percent of its bills without borrowing more money, according to the Bipartisan Policy Center, a Washington think tank.

That would force the administration to make some difficult choices, even though officials believe emergency measures will buy little time and cannot stave off an economic catastrophe.

If Treasury were to decide to delay some payments, one option could be to postpone a disbursement of more than $49 billion to Social Security recipients that is due on August 3.

It would be a politically explosive step but one that could allow the government to temporarily pay bondholders to try to avoid foreign investors dumping U.S. Treasuries and the dollar.

The administration has warned that any missed payments, including those to retirees, veterans and contractors, would be default by another name, and the Treasury team still has concerns that any contingency plan would prove unworkable.

Steve McMillin, a former deputy director of the White House Office of Management and Budget under Bush, said Treasury has options but most of them are “pretty ugly.”

If Treasury were to decide to delay payments, it would need to re-program government computers that generate automatic payments as they fall due — a massive and difficult undertaking. Treasury makes about 3 million payments each day.

From their second floor offices in Treasury, Miller and Fiscal Assistant Secretary Richard Gregg, are the lieutenants Geithner is relying on if the administration’s first option of negotiating a deal with Republicans falls apart.

“She’s dealing with this day in and day out,” said a former Treasury official.

The former official said Treasury aides were “speaking with Congress on a daily basis,” giving them the latest updates on receipts and when default could occur.

“Every day they talk about the debt ceiling. The night before, they get the most recent numbers,” the source said.

Michael Barr, a former Treasury official who worked closely with Miller, said he spoke with Miller and Gregg a month ago.

“They were exploring if there were any legal and practical alternatives. It was not obvious to them that the president has the legal authority to pick and choose who gets paid,” he said.

Barr added: “It is not obvious that even if they had legal authority, that as a practical matter you can do it.”

As recently as June 21, Miller told a group of sovereign debt holders in London that there is no Plan B and assured them that the debt limit would be raised before August 2.